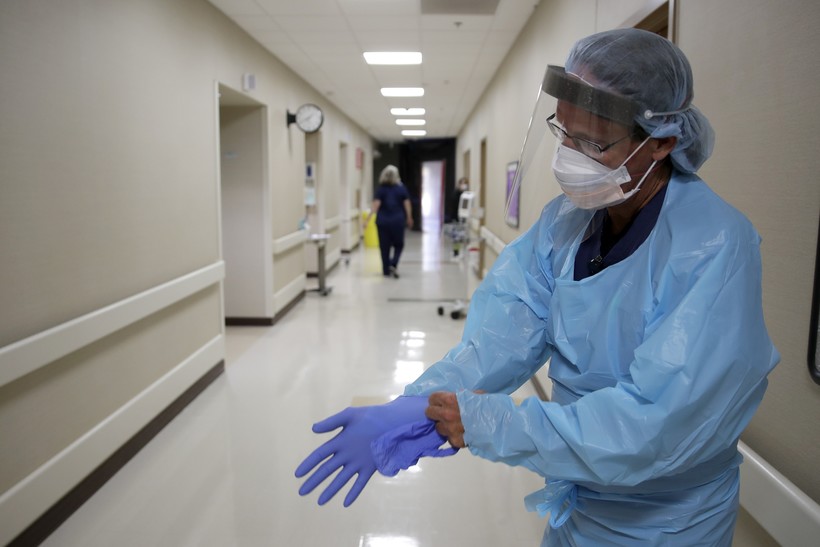 Registered nurse Kevin Hoover puts on protective gear as he prepares to check on a COVID-19 patient Wednesday, May 20, 2020 at Kearny County Hospital in Lakin, Kan. The rural 24-bed hospital is currently treating five patients for COVID-19 while the county has seen a spike in cases due to clusters in nearby meatpacking plants. Charlie Riedel/AP Photo

As of Sunday, 101,227 Tests Have Come Back Positive Since Start Of Pandemic
By WPR Staff
Share:

New reports of COVID-19 cases are continuing to rise in Wisconsin, based on the latest data published by the state’s Department of Health Services.

DHS reported 1,665 new cases of the virus on Sunday, bringing the average for the past seven days to 1,720 daily cases, a record high for that figure.

One week ago, the average was 1,142 daily cases. That average has been rising since Sept. 11.

Saturday's new case total is down significantly from Friday's record high of 2,533.

The latest figures bring the overall total of positive cases in Wisconsin to 101,227, according to the DHS. A total of 1,242 people in Wisconsin have died from COVID-19, with a single new death reported on Sunday.

According to DHS, 20 percent of all test results reported on Sunday were positive for COVID-19, bringing the overall percentage of positive tests over the past seven days to 16.3 percent. The previous seven-day period's test-positive rate was 14.1 percent. That figure has been rising since Sept. 15, when it was 14 percent.

Wisconsin's daily testing capacity — based on the availability of test supplies and adequate staffing — has grown from 120 available lab tests in early March to 38,563 as of Sunday. The number of actual people with test results reported on Sunday was 8,320.