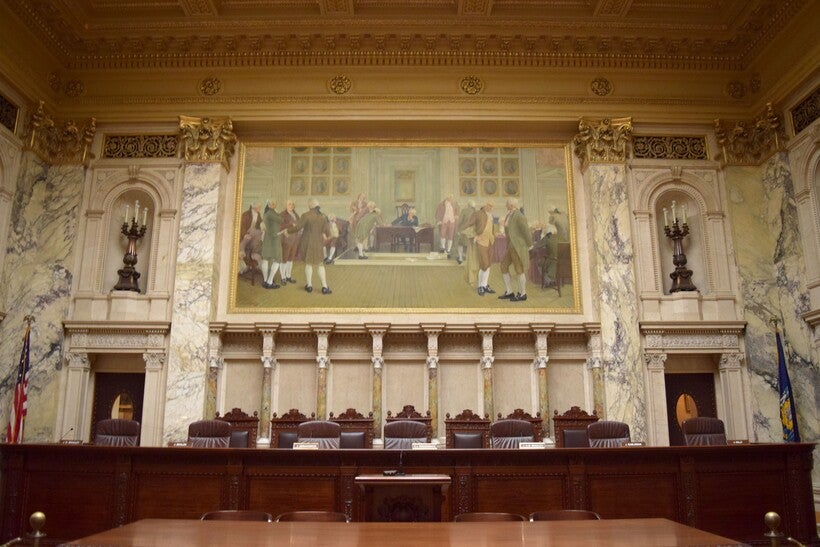 Conservatives on the Wisconsin Supreme Court have struck down three of Gov. Tony Evers' partial vetoes from the 2019 state budget, bucking decades of court rulings that have upheld or expanded Wisconsin governors' veto powers.

The court's ruling was the second in as many days that sided with the state Legislature in a power dispute with the governor, the first coming Thursday when justices largely upheld lame-duck laws passed in 2018.

Justices were asked to rule on the governor's veto power by the conservative Wisconsin Institute for Law and Liberty (WILL), which challenged four of Evers' budget vetoes from 2019. But more broadly, the group used the case to ask the court to rethink, and largely reject, state Supreme Court precedent handed down in decisions dating back to 1935.

While justices sided with the institute in three of the four vetoes, the court's 5-2 conservative majority could not settle on a single rationale for when a governor's partial veto goes too far. The result was a fractured ruling, with multiple justices offering their own suggestions for how to resolve disputes like this in the future.

"Without a clear rule, how will future courts know how to apply this law? They won't," said Justice Ann Walsh Bradley, one of the court's two liberals. "How can governors be assured that the partial veto they are crafting is constitutional? They can't."

The practical effect is that three of Evers' 2019 budget vetoes have been declared invalid. They include one that shifted funding for school buses to electric vehicle charging stations, another that changed the definition of "vapor products" and a third that redefined who qualified for funding under a local roads improvement fund.

While conservative justices offered competing reasons for why the vetoes should be struck down, they all agreed in principle that Evers had exceeded his authority when he altered the budget that was sent to him by Republican lawmakers.

"While the governor's partial veto power is incredibly broad, it should not be read to fundamentally upend the overall structure of our government embedded in our constitution," wrote conservative Justice Brian Hagedorn, who was once the chief legal counsel for former Republican Gov. Scott Walker. "The constitution's placement of law-creation in the hands of the Legislature means we cannot permit a practice that turns the governor into a one-person Legislature."

Justices rejected a second, more limited lawsuit brought by Wisconsin Small Business Inc. which challenged two vetoes made by Republican Gov. Scott Walker in 2017. In a 5-2 decision, the court ruled that case was brought too late to be considered by justices. Justices Rebecca Bradley and Daniel Kelly dissented.

Evers issued a statement after the ruling that took aim at its ambiguity while criticizing Republicans for trying to undo his budget.

"Today’s ruling departs from decades of precedent and only creates chaos and confusion," Evers said in a statement. "As I said yesterday, we’re not going to let folks who are bitter about an election that happened nearly two years ago stop us from getting things done for the people of our state."

Rick Esenberg, president and general counsel for WILL, said the ruling recognized the limits the partial veto power and upheld the separation of powers.

"While there are multiple writings and their interaction is complex, today’s decision severely limits and perhaps even ends the Governor’s power to create new law through vetoes," Esenberg said in a statement.

A Break From Precedent

Evers was at the center of this veto dispute, but governors from both parties have used Wisconsin's partial veto extensively to reshape budget bills passed by the Legislature.

While governors in other states have "line-item" vetoes, Wisconsin's "partial" veto is far more broad and is widely recognized as one of the most powerful in the nation.

The veto power has its roots in a constitutional amendment approved by Wisconsin voters in 1930. Voters restricted the power twice, approving new amendments in 1990 and again in 2008. The 1990 amendment banned the so-called "Vanna White Veto," where governors would strike individual letters of budget bills to create new words. The 2008 amendment banned the so-called "Frankenstein Veto," where governors would veto individual words in multiple sentences to create new sentences.

But before Friday, the Wisconsin Supreme Court had largely upheld or expanded governors' veto powers in eight previous decisions, according to a research bulletin by the nonpartisan Legislative Reference Bureau. The first of those decisions was handed down in 1935.

WILL wanted to upend those precedents and start anew, arguing that the word "partial" had been given too much weight by the courts, giving governors too much power to legislate.

What resulted was a jumbled hodgepodge of decisions Friday, with three conservative justices writing their own opinions, each suggesting different tests for when partial vetoes goes too far.

The court's liberals, meanwhile, argued each approach was ignoring the will of the people and 85 years of court precedent.

While their reasoning differed, Justices Hagedorn, Kelly, Bradley, and Annette Ziegler all supported striking down the three vetoes, as did Chief Justice Patience Roggensack.

Kelly and Bradley would have struck down a fourth Evers veto that changed a fee structure for heavy trucks. They also would have all but eliminated decades of Supreme Court precedent on the partial veto, instead requiring that any future partial vetoes may not create a new law that was different from what passed the Legislature.

"This case presents an opportunity to return the disordered pieces of the law-making machinery to their proper places, and I think we should take it," Kelly wrote in his opinion.

"It is an embarrassment, not a source of authority, that our court has never honored the constitution's limitations on the partial veto," Kelly added in a footnote. "Perpetuating an embarrassment is not a judicial doctrine to which I subscribe."

Kelly and Bradley were both appointed to the court by Gov. Walker. Bradley later won a 10-year term but Kelly lost his election this year to Justice-elect Jill Karofsky, meaning he will leave the court after his term ends on July 31.

Hagedorn, in an opinion joined by Ziegler, rejected three of the vetoes, and suggested Kelly's approach went too far. He said the governor should be banned from selectively editing parts of a bill "to create a new policy that was not proposed by the Legislature," but acknowledged the issue was not settled.

Roggensack cautioned against breaking from 85 years of Supreme Court precedent and asserted that her own opinion, which no justices joined, was not breaking new ground. But she ruled that a governor's veto must not alter "the stated legislative idea" behind a bill.

The court's liberals rejected each approach, and chastised conservatives.

"In an important case like this, where the people of Wisconsin need clarity," wrote Bradley, joined by Justice Rebecca Dallet, "we instead sow confusion."