Shooting At Suburban Milwaukee Spa In 2012 Ended In 4 People Dead
By Shamane Mills and The Associated Press
Updated:
Tuesday, April 30, 2019, 11:30am
Share: 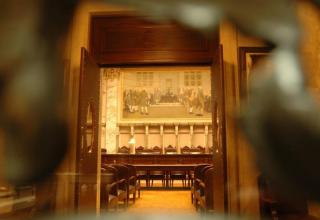 The Wisconsin Supreme Court says a firearms marketplace website where a man bought the gun he used to kill three people in 2012 is not liable in the attack.

Radcliffe Haughton was barred by a restraining order from legally having a gun. But he bought one through the site Armslist.com and used it to kill his wife and two of her co-workers at a suburban Milwaukee spa. He wounded four others before he killed himself.

A state appeals court rejected that argument last year. The Supreme Court reversed that ruling Tuesday, finding that Armslist isn't responsible for information posted by a third party on its website because its advertising forum used neutral tools that can be used for lawful purposes. In addition the court said the federal law is designed to protect speech.

Gun control advocates are disappointed in the ruling.

"This was a grave injustice and will make the people of Wisconsin at far more risk of gun violence as well as people across the country," said Jonathan Lowy from the Brady Center to Prevent Gun Violence, the group representing Daniel.

This case has gotten further than any other lawsuits filed against Armslist. One other case involving a Boston police officer shot using a gun purchased through Armlist is still pending, Lowy said.

The Brady Center is considering whether to appeal the ruling to the U.S. Supreme Court.

Editor's note: this story was updated to include reporting from Wisconsin Public Radio.