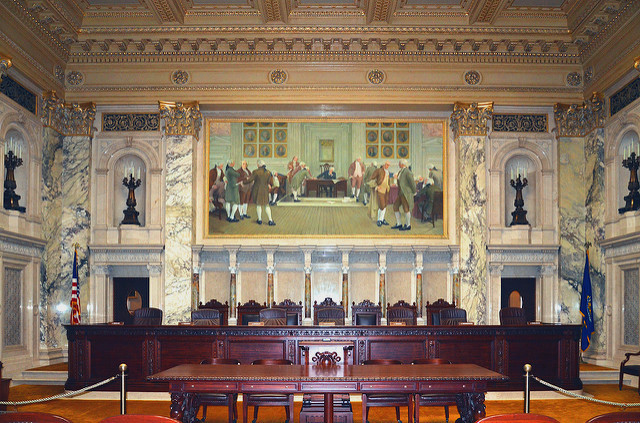 County Governments Would Have To Pay For The Increase
By Shawn Johnson
Share:

The Wisconsin Supreme Court has voted to raise the hourly rate of pay for court-appointed attorneys from $70 to $100 per hour, a move expected to increase costs for county governments throughout the state.

The court's decision granted part of a petition from a coalition of lawyers and judges who say Wisconsin's current system for public defense attorneys is so underfunded, it's facing a constitutional crisis.

But the court's ruling leaves the pay rate for state-funded public defenders at $40 per hour, the lowest in the nation.

During public testimony on the petition earlier this week, several lawyers and judges said the pay for public defenders was so low in Wisconsin that it was hard to find attorneys in many counties. It was dire, they said, that some people who were charged with crimes were left to sit in jail for several weeks while they waited for representation.

Several justices said at the time that they thought the current rate of pay for defense lawyers was too low, but they also questioned what the court could do about it.

The court's decision to increase pay for some lawyers and not others could lead private attorneys to refuse public defender assignments and instead hold out for court-appointed positions.

"The cost of the new $100 rate is going to fall on the counties, which they're going to view, I think correctly so, as an unfunded mandate," said Milwaukee defense attorney John Birdsall in an interview with Wisconsin Public Television.

Birdsall, who co-authored the petition before the court, said the move would put pressure on the state Legislature to raise the rate for all public defenders to $100.

"Somebody's going to have to raise that rate to avoid the system literally shutting down," Birsall said.

In addition to raising the rate for court-appointed lawyers, Wisconsin Supreme Court spokesman Tom Sheehan said justices denied a proposal to tie future increases to the rate of inflation.

Justices also denied a request to deem the current pay rate for public defenders as "unreasonable."

Editor's note: The original version of this story referred to a $32 million annual cost for raising the pay rate for court-appointed lawyers. That figure actually refers to the cost of raising state public defender pay.