With elections for Wisconsin's 7th Congressional District and the U.S. president coming up this year, and with a chaotic April 7 primary still in the rear-view mirror, two Wisconsin senators agree that the threat from COVID-19 will change the way future elections are run.

April's election was beset with problems including voters not receiving requested absentee ballots, mailed absentee ballots getting lost and long voting lines that dragged on as voters tried to social distance to protect themselves during the COVID-19 pandemic.

But the long lines in cities such as Milwaukee that had five polling places serving 180 wards shouldn't happen, said Bernier, who's also chair of the state Senate Committee on Elections, Ethics and Rural Issues.

Local election officials in Milwaukee and other cities that saw long lines have said polling places had to be reduced because of a lack of poll workers and concerns over safety of staff members.

Absentee voting proved troublesome during the April election, particularly with numerous reports that voters didn't receive their ballots in time to be postmarked by April 7 — a requirement set by the U.S. Supreme Court hours before the election began — and later reports that as of mid-April,150,000 absentee ballots still hadn't been returned.

With an overwhelmed system unprepared for the volume of absentee voters — 73 percent of votes cast were absentee this April, compared with fewer than 12 percent in the 2016 spring election — there needs to be changes made to how the state counts those ballots, state Sen. Mark Miller, D-Monona, told "Central Time"

Both Miller and Bernier brought up a proposal called the absentee voting efficiency option. Although it didn't pass the Legislature, this proposal would have allowed voters to fill out an absentee ballot and submit it into the counting machine right away. That would preclude clerks from having to count those ballots on election day.

Miller said that this option would alert the voters whether they made a mistake and spoiled the ballot, for example by voting for too many people for one office.

It's not a solution free from problems, though. The voting machines would be unattended, and could give rise to suspicions about the validity of the count.

"I think anything that sort of raises the question about whether or not the ballots or the machines were tampered with is serious," Miller added.

Another proposal called for clerks and local municipalities to decide if they wanted to count ballots on the Monday before the election. That proposal failed, too.

Miller advocated for at least one of these two being considered, saying it's likely clerks would want to have these options open to them in the likely event that more absentee ballots are requested in the upcoming elections.

The senators split when debating the possibility of sending absentee ballots via the U.S. Postal Service to every eligible voter for each election.

Sending ballots to everyone is a long process that could take longer than two years to set up, Bernier said, citing lists of criteria and processes that need to be met, according to the state Elections Commission.

"Those processes are not something that you can just flip a switch and go from voting on election day to all of a sudden everybody's going to mail in," she said.

Both Bernier and Miller agreed that the Postal Service in Wisconsin was overwhelmed in its handling of the 1.2 million absentee ballots on short notice, but Miller was more optimistic that Wisconsin could follow templates similar to what other states have done to get the mail-in process running more efficiently.

The senators departed again when asked about whether witness signatures should be required on absentee ballots. These signatures are further proof that the person signing the ballot is who they say they are, Bernier said. It's a safeguard.

But Miller said it shouldn't be necessary because it "unnecessarily invalidates the absentee ballot of the voter," he said.

Miller also spoke against having to include a copy of a valid identification, which is a requirement to obtain an absentee ballot, because of Wisconsin's voter ID law.

"I think you prove who you are and you prove your residence at the time that you register," he said.

The senators came together wholeheartedly against the prospect of some form of online voting.

"The last thing that I would ever consider is doing things on the internet in regard to our election security," Bernier said.

Miller said the internet is too vulnerable a system to ensure that votes would be valid and not subject to hacking.

With the current method, he said, at least there's a hard copy available and ways to double-check the counts. There's still a vulnerability with those machines that count the votes because those machines could be hacked. But Miller said if there's evidence of that, then the paper ballots can still be counted manually.

COVID-19 & Elections: How Can Wisconsin Make The Voting Process Better During The Pandemic? 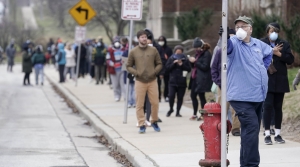 No matter who you voted for on April 7 or wether you voted at all, many agree Wisconsin's first election during the coronavirus pandemic had problems. We talk to a Republican and Democrat from the state Senate Committee on Elections, Ethics and Rural Issues about how to improve the process ahead...