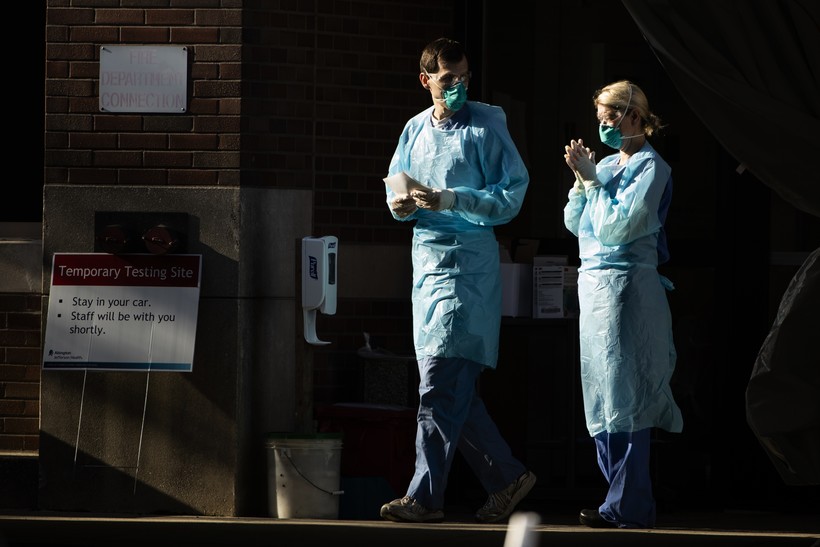 Gov. Tony Evers announced Wednesday he will declare a new public health emergency and extend the statewide mask mandate. On a call with reporters, he said he expects the mandate to be in place through approximately mid-January. This announcement comes as COVID-19 continues to devastate Wisconsin's health care system, with record deaths and hospitalizations reported Tuesday.

The state Department of Health Services reported 7,989 new cases of the disease Wednesday, bringing the average for the past seven days to 6,563 daily cases. Wednesday's total is the highest that number has been since the beginning of the pandemic, surpassing the previous record set last week.

There were 52 new deaths from COVID-19 reported Wednesday. On Wednesday, 12,140 tested negative.

Of the people who got tested for COVID-19 over the past week, 34.7 percent were positive for the disease, according to DHS. That rate has declined slightly over the past few days, although it remains significantly higher than it was at the beginning of September, when it was below 10 percent.

On Sept. 30, DHS also introduced an alternative positivity rate, one that measures the percentage of tests that are positive, instead of the percentage of people who get a positive result. The new metric takes into account people who have been tested multiple times. The seven-day average for that number is at 16.9 percent.

According to the Wisconsin Hospital Association, there were 2,277 COVID-19 patients hospitalized as of Tuesday. A total of 15,100 people have been hospitalized because of the disease, or 4.6 percent of all positive cases. On Wednesday, 283 people were newly hospitalized.

The latest figures bring the overall total of positive cases in Wisconsin to 331,837, according to DHS. A total of 2,793 people in Wisconsin have died from COVID-19.

As of last Wednesday, the north-central region of the state had the most new cases per capita over the previous two weeks, while the northwest region saw cases rise most rapidly.

Wisconsin's daily testing capacity — based on the availability of test supplies and adequate staffing — has grown from 120 available lab tests in early March to 59,235 as of Wednesday. The number of actual people with new test results reported Wednesday was 20,129.

Dr. John Raymond, president and CEO of the Medical College of Wisconsin, also spoke at a Wisconsin Manufacturers and Commerce event Wednesday. Despite the state’s large testing capacity, Wisconsin’s high rate of positive coronavirus tests suggests too few are being conducted, he said.

"We’re far out of range for getting the pandemic under control," he said.

COVID-19 patients occupy about 20 percent of the state’s hospital beds, a significant number considering most hospitals typically aim to maintain 75 to 85 percent occupancy for staffing and financial reasons, he said.

More than 75 percent of the Wisconsinites who’ve been diagnosed with coronavirus have recovered, meaning their symptoms have resolved or it’s been more than 30 days since their initial positive test, Raymond said. But included in that group are many so called "long haul patients," who are still experiencing symptoms weeks after being diagnosed.

The enduring nature of the virus in some patients may have implications on the workforce moving forward, he said. But there’s also good news on the horizon, he said, with the likely possibility a COVID-19 vaccine approved for emergency use before the end of the year, he said.