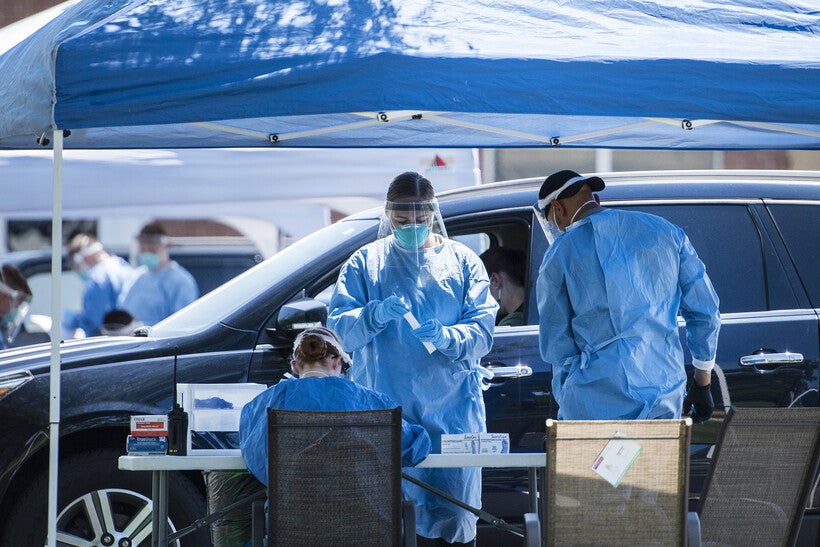 Wisconsin recorded significantly fewer new cases of COVID-19 on Sunday compared to recent days, but its total number of tests was also down and its positivity rate remained above 30 percent, according to the latest data published by the state Department of Health Services.

The number of new COVID-19 cases in Wisconsin had reached record numbers for three past five days, peaking at 7,065 cases reported Saturday — the first time the state had seen that figure reach 7,000.

On Sunday, DHS reported 4,280 new cases of the disease, bringing the average for the past seven days to 5,507 daily cases, its highest rate ever. The state recorded 12,761 total tests on Sunday, compared to a total of 18,928 on Saturday. Wisconsin's positivity rate was 34 percent in Sunday's tests.

One week ago, the state's seven-day average was 4,385. Cases have been rising since early October, and Wisconsin is among the worst-hit states in the nation. Hospitalizations rose as another 112 people were reported hospitalized. The state reported a total of 1,806 hospitalized COVID-19 patients.

There were 11 new deaths from COVID-19 reported Sunday. On Sunday, 8,481 tested negative.

The percentage of people who got tested for COVID-19 and were positive for the disease over the past week rose to 34.4percent, according to DHS. That rate has repeatedly broken records for more than a month in Wisconsin, and its rate on Sunday was at an all-time high.

On Sept. 30, DHS also introduced an alternative positivity rate, one that measures the percentage of tests that are positive, instead of the percentage of people who get a positive result. The new metric takes into account people who have been tested multiple times. The seven-day average for that number is at 17.4 percent.

A total of 12,839 people have been hospitalized because of the disease, or 4.8 percent of all positive cases.

The latest figures bring the overall total of positive cases in Wisconsin to 267,410, according to DHS. A total of 2,312 people in Wisconsin have died from COVID-19.

According to data published Nov. 4 by the DHS, the North Central region of the state had the most new cases per capita over the previous two weeks. The western part of the state saw cases growing the fastest.

Wisconsin's daily testing capacity — based on the availability of test supplies and adequate staffing — has grown from 120 available lab tests in early March to 59,155 as of Sunday.

A total of 2.2 million people have been tested over the course of the pandemic. Of those, 1.9 million have tested negative.

Correction: An earlier version of this story incorrectly stated that Saturday marked the fourth day in the row in which the state broke its record for most new COVID-19 cases reported in a single day. There was not a record number of new cases on Nov. 5.