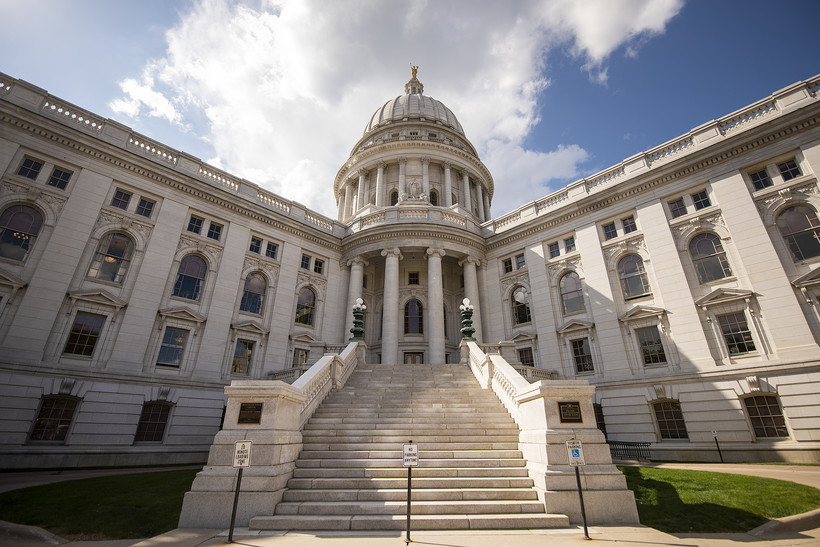 2 Democrats and 3 Republicans are running for secretary of state, which has few responsibilities in Wisconsin.
By Shawn Johnson
Share:

Races for secretary of state have taken on added significance around the country this year as some Republican candidates have pledged wholesale changes to the way elections are run in their states.

It’s happening in Wisconsin, too, but there’s a noteworthy difference: The secretary of state doesn’t run elections here.

In fact, Wisconsin’s secretary of state has just one full-time employee, and most of the office’s responsibilities have been outsourced to other state agencies that answer to the governor.

Three Republicans — Amy Loudenbeck, Jay Schroeder and Justin Schmidka — all say they want to give the secretary of state at least some power to run elections. Two Democrats — incumbent Secretary of State Doug La Follette and challenger Alexia Sabor — say they want to prevent the office from being used to undermine democracy.

Adding new duties to the secretary of state's office would require approval from both the Legislature and the governor.

Doug La Follette has been Wisconsin’s secretary of state for 44 years.

He was first elected in 1974, left for four years following a failed bid for lieutenant governor in 1978, then won again in 1982. He’s held the office ever since.

La Follette is quick to point out that his list of victories includes elections in 2010 and 2014, two big years for Republicans when La Follette was the only Democratic candidate who won statewide. He said he’s running this year because he thinks he’s the candidate who can win in 2022.

"There's only one issue in this primary election, and that's which Democrat has the best chance to win the November election,” La Follette said. "And I think I'm that candidate.”

La Follette has seen firsthand as the office of secretary of state has lost duties over the years. He said he started with about 48 employees in the 1970s, handling a variety of documents for businesses, like trademarks and uniform commercial codes.

Former Republican Gov. Tommy Thompson transferred most of those duties to other agencies including the Department of Financial Institutions. Former Republican Gov. Scott Walker made further cuts and moved the office from the 11th floor of a downtown office building to the basement of the Capitol. Today La Follette has one employee, and the office focuses mainly on authentication documents called apostles.

Despite the loss of responsibilities, La Follette said he’s running again because he was approached by people who were worried the office might fall into Republican hands.

"They believed that I was the most electable Democrat to hold that office for a Democrat, and prevent the Republicans and Wisconsin from setting up a situation where they can meddle with the election results," La Follette said. "So I said OK."

La Follette’s primary challenger, Alexia Sabor, chairs the Democratic Party of Dane County, where surging turnout has been instrumental for Democrats in a string of recent statewide victories, including the 2020 presidential election.

"I am concerned that so much has been stripped away from this office that if we don't revitalize it ... that it’s going to fall into Republican hands," Sabor said. "I am the person who has a vision for transforming the seat."

Sabor said if elected she’ll be more vocal about how budget cuts have hurt the secretary of state, and be more forceful about asking for increased funding.

She said she’d also bring expertise to another requirement of the job. The secretary of state is also one of three constitutional officers who sit on the Board of Commissioners of Public Lands, an agency in charge of managing 77,000 acres of state forests and investing the proceeds in public school libraries. Sabor said her Ph.D. in Forest Ecology and Management from the University of Wisconsin-Madison would also help her make responsible decisions on the board.

"We really need to be thinking about how these lands fit into the total picture," Sabor said. "And how we're managing those in the face of climate change."

Sabor took issue with La Follette’s decision earlier this year to leave on a trip to Africa in the middle of campaign season. She said he also hasn’t attended the local Democratic Party events she’s visited on her campaign.

"It signals that you're taking their vote for granted, at best," Sabor said. "And it also signals a lack of interest in campaigning for the whole ticket."

Amy Loudenbeck is a Republican state representative from Clinton, where she was first elected in 2010. Loudenbeck serves on the Legislature’s powerful budget committee and said she’s had more than 50 of her bills signed into law since she was elected.

"I would ask voters to strongly consider my track record of getting things done in the Legislature," Loudenbeck said. "That's what sets me apart. Neither of my two Republican opponents have that kind of a resume."

Loudenbeck said she wants to eliminate the Wisconsin Elections Commission and transfer some of the duties to the secretary of state.

"You have duties like training, like maintaining the voter rolls, like outreach to voters that could be put into that office," Loudenbeck said. "It's not just about the power. It's about doing the day-to-day duties with integrity."

Loudenbeck also wants to explore giving the secretary of state more responsibilities like corporate registrations or the filing of deeds.

Loudenbeck has a reputation as a detail-oriented lawmaker and said her work ethic has helped her pass legislation in an office with a relatively small staff.

"It is a hallmark of my style," Loudenbeck said. "I'm a working member of my own team. I wouldn't ask anyone to do anything that I'm not willing to do."

When it comes to campaign fundraising for secretary of state, Loudenbeck has far outpaced the rest of the field.

A review of the race by the Wisconsin Democracy Campaign showed that between Jan. 1 and July 25, Loudenbeck had raised nearly $131,000 and had nearly $182,000 in her campaign account. That was about eight times as much cash on hand as La Follette.

For Republican Jay Schroeder, elections are the top reason he's running for secretary of state in 2022.

"The Wisconsin Elections Commission needs to be terminated," Schroeder said. "And put under the secretary of state's office."

Schroeder ran for secretary of state in 2018 and lost to La Follette by about 5.6 percent.

He said what separates him from Loudenbeck is that she has a record of supporting the Elections Commission.

Schroeder said that if he's elected, he'll require voting machines to have no internet access.

"The other thing is you have to have paper ballots, with watermarks, just like our currency," Schroeder said.

"If I was secretary of state, I would do some of those continuing investigations, and maybe even sting operations, to see if there's a problem and solve it," Schroeder said. "But everything I'm telling you is to build confidence in our elections."

Schroeder ran briefly for secretary of state in 2014 before dropping out of the race to run for an open state Assembly district in Neenah. He finished fifth in the primary with about 9 percent of the vote.

Republican Justin Schmidtka hosts "The Badger State Resistance Podcast," which his campaign website says he started as a result of the 2020 election. The introduction to the podcast states that it's "fighting to combat tyranny, one state at a time, starting with Wisconsin."

"This is going to decide whether or not the RINOs are going to get what they deserve and be booted out of everything," Schmidtka said, using the acronym for Republican In Name Only. "Whether or not the patriots will prevail and now move forward to secure Wisconsin for future generations and take out the Democrats once and for all. Move them out of Madison and say, 'See you later.'"

Schmidtka said the 2020 election was stolen, repeating a false claim made regularly by Trump.

Schmidtka did not respond to a request for an interview with Wisconsin Public Radio.