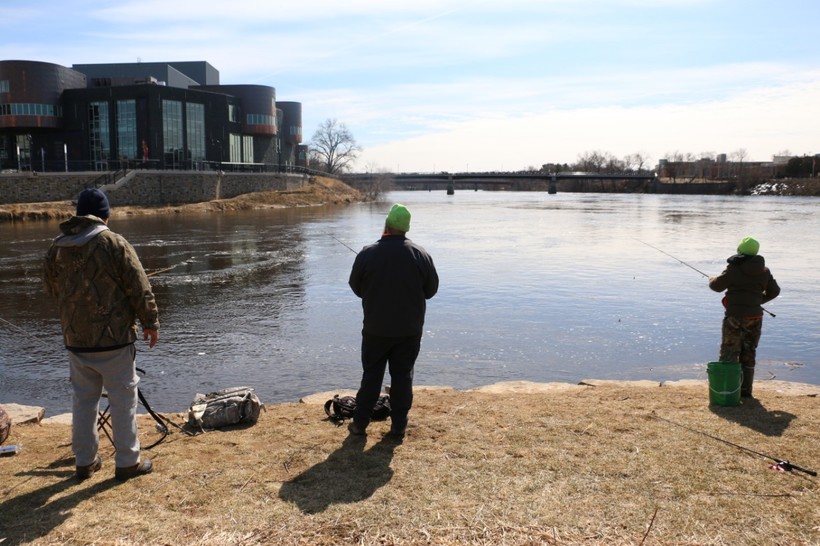 In this file 2021 photo, Eric Barnhardt, of Eau Claire, right, fishes for walleye with his stepson and grandson along the confluence of the Eau Claire and Chippewa rivers at Phoenix Park near downtown Eau Claire. He said he's been "cooped up" since Gov. Tony Evers limited social gatherings of 10 people or more and waiting for the spring spawning run of walleye is a good way to get outside the house. Rich Kremer/WPR

As Wisconsin moves toward its first full week of unprecedented social restrictions to combat the new coronavirus, many residents are heading outdoors for fresh air, exercise and peace of mind.

In the city of Eau Claire, residents say they're turning to parks and bike trails to avoid going stir crazy.

On Tuesday, Gov. Tony Evers banned all social gatherings of 10 or more people. It was an order that would have seemed unthinkable just days before. All bars and restaurants in the state were forced to close. The only exception was for those offering takeout. That came on the heels of a statewide closure of public schools and universities.

On a crisp Saturday morning in downtown Eau Claire, the streets were much more empty than usual.

But nearby at the city's popular Phoenix Park, the scene wasn't that different from a typical day. A line of anglers were casting for walleye during their spring spawning run at the confluence of the Eau Claire and Chippewa rivers. Families, like ducks in a row, were bicycling through the winding trails. And dozens of couples were jogging or casually strolling by.

"It's easy, when you're sitting in the house, to watch the news and look at Facebook and just see 'panic, panic, panic,'" said Tara Grenz. "And then, you come down here and it's like, 'Oh, wait. There's still people living their lives out here.'"

Grenz cleans houses in Eau Claire and as someone with asthma, she said she decided to take a week off as the number of people testing positive for COVID-19 in Wisconsin grew. During that time, she said she's essentially sheltered in place at home. 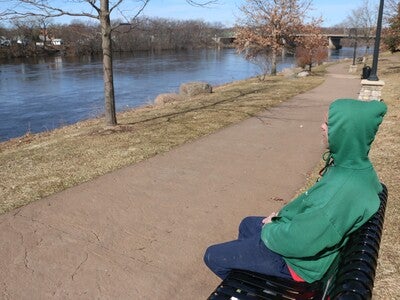 Jeff Honkanen, of Eau Claire, rests on a park bench in Phoenix Park near the city’s downtown. He said government imposed closures of libraries, restaurants and bars have been annoying, but he’s hopeful the efforts will keep the COVID-19 death tool in Wisconsin to a minimum. Rich Kremer/WPR

"I've been dying to get out of the house," said Grenz.

At her side was Stephen Duerre, a maintenance worker at an apartment complex located inside an old tire factory. He said due to the building's age, he is responsible for asbestos abatement, which requires him to wear a full hazmat suit and respirator for protection.

"That's probably the safest thing you can do these days," Duerre said with a chuckle.

He, too, is planning to take a week off from work with the goal of helping limit the spread of COVID-19.

"But everything that I've heard is if you come outside and keep your distance from people, it's going to be alright," said Duerre. "And frankly, I think that’s a healthy thing."

After reaching in his bait bucket for a minnow, Eric Barnhardt said he, too, has been feeling cooped up. On Saturday, he was hunting walleyes in Phoenix Park with his son-in-law and grandson. He said it's part of his normal spring routine but doubles as a good way to socially isolate.

"There's no big groups down here," said Barnhardt. "You're out in the fresh air. I don’t think anything down here is going to bug you other than a hook in the finger."

Jordan Montgomery is a temporary transplant in Eau Claire. He said he's originally from Missouri and recently flew in to western Wisconsin to visit with a friend.

"I was in Florida on spring break, left and then I came back here to be quarantined for a couple days," Montgomery said, with a smile on his face.

He said in recent days he, his friend and her mother have stayed at home and getting outside is good for the soul.

"It reminds me that there's still hope," said Montgomery. "I don’t know. You kind of go insane sitting inside all day with nothing to do. The most we've done the last couple days is eat, shop, play board games, watch TV. So, it's nice to get some fresh air, take a walk."

While sitting on a bench watching the slightly swollen Chippewa River roll by, Jeff Honkanen said the government-imposed social restrictions have been trying.

Honkanen said the efforts are worth it if they stem the number of deaths caused by the virus. But he said people have a natural need for some social interaction.

Later on Saturday, the Wisconsin Department of Health Services posted its most recent update on COVID-19 outbreaks. So far, 281 people have tested positive while 4,628 have tested negative. So far, four deaths have been reported.