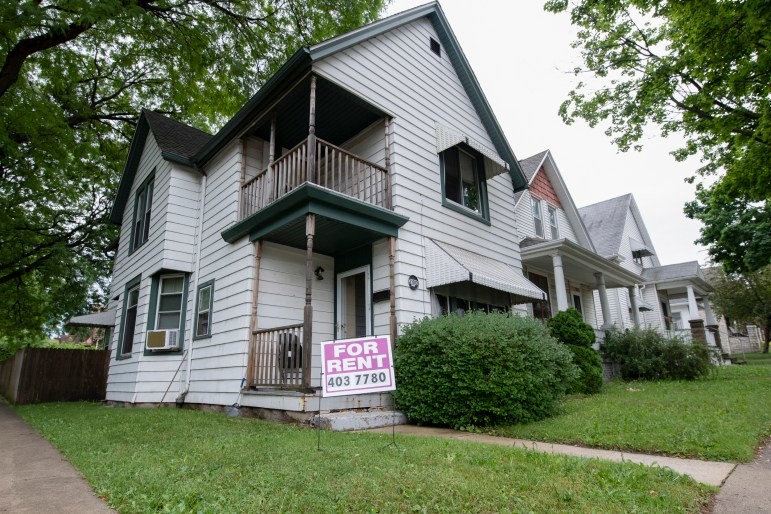 A "for rent" sign is seen outside of a home on Griffin Street in Milwaukee on June 29, 2021. Several renters say they are struggling to navigate federally funded rental assistance programs offered through Milwaukee County and the city of Milwaukee. Isaac Wasserman/Wisconsin Watch

The cost of rent in Wisconsin may be normalizing after a pandemic-induced spike — even as evictions return to pre-pandemic levels.

A study by the website Rent.com found that Wisconsin was one of four states to see rents decline in October compared to last year. But data from Princeton University's Eviction Lab shows that evictions in the state are close to pre-pandemic levels.

Brian Carberry, the managing editor for Rent.com, said rent costs are beginning to normalize following a spike over the last year.

"The past year, prices were really high because, for two years, they stayed flat," he said. "They shot up to kind of get back to correct itself, and now they're beginning to come back down."

The dip in rent prices may not last, though. Experts say rising interest rates could cause rents to spike.

David Clark, an economic analyst for the Wisconsin Realtors Association and a Marquette University economics professor, said last month that rising interest rates will slow demand for home buying, but not for rent.

"If you have a shortage in the existing home market, that will move people who form households into rental housing," he said. "That's going to increase demand for rental housing, which will then put upward pressure on those prices."

At the same time, evictions in Wisconsin have been in the spotlight after someone spray painted a Janesville home, announcing that its resident "owes $6,000 in back rent." The renter in question is disabled and lives on $900-per-month Social Security, while her rent was $600 per month.

Jacob Haas, a research specialist for the Eviction Lab, said evictions went down during the height of the pandemic, but have risen as assistance programs have ended.

He said eviction filings in Wisconsin fell after Gov. Tony Evers blocked non-emergency eviction proceedings in March 2020. But those protections began to expire in May 2020, and filings have since increased.

"This past October, we saw about 2,200 cases (in Wisconsin), which is almost where we were prior to the pandemic," Haas said. "It's about 95 percent of historical averages."

In fact, the Eviction Lab found that Wisconsin has already had almost 20,000 eviction filings so far this year.

Wisconsin has had 52,549 eviction filings since March 2020, more than double neighboring Minnesota’s filings of 25,770 over the same period, according to the Eviction Lab.

Haas said low-income renters and renters of color are especially vulnerable to evictions.

"A vast majority of the lowest-income households across the country and in Wisconsin spend more than half of their incomes on rents," he said. "A lot of that has to do with housing supply. We know that there's not enough housing in the country, particularly for the lowest income renters."

According to the National Low Income Housing Coalition, Wisconsin has a shortage of more than 120,000 rental units for low-income renters.

"Different programs are designed to either divert tenants away from the eviction court system, keep things from going on their record and make eviction less damaging to the tenants, while also keeping landlords whole," he said. "There's a lot of those kinds of measures that could be put in place in certain areas that could make the eviction process less harmful, and keep renters housed."

Carberry added that "it's really anyone's guess" as to what’s going to happen to the market for rental units over the next year.

"I do think rent prices are always going to be increasing in most places across the country," he said. "Where you see decreases — or where you see rent prices flattening — is kind of temporary, but we are still going to follow that kind of cycle of prices going up."