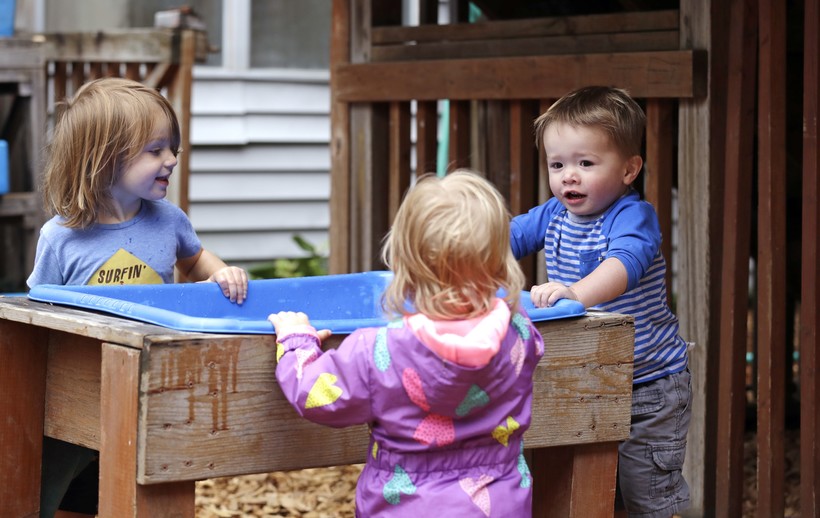 Astrid Kozlen, left, and Vincent Seeborn, right, talk with another toddler at a splash bin in the playground at the Wallingford Child Care Center in Seattle on Monday, Aug. 27, 2018. Elaine Thompson/AP Photo

Early childhood education advocates and experts will soon team up with community leaders to devise policy recommendations aimed at improving the availability and quality of infant and toddler care in Wisconsin, thanks to a new planning grant.

Wisconsin is one of 11 states awarded $100,000 by the Pritzker Children’s Initiative to "develop an ambitious prenatal-to-age-three policy agenda and action plan," according to a press release.

"I’ve said all along, what’s best for our kids is what’s best for the state," Gov. Tony Evers said in a statement. "Investments in early childhood education return their value to the kids we serve, the adults working on their behalf and the economy as a whole."

Ruth Schmidt, executive director of the Wisconsin Early Childhood Association, which submitted the proposal, said she expects the coalition to develop "very tight" policy recommendations over the course of nine months, and to later apply for a $1 million implementation grant from the same source.

"It allows us to actually dig into community concerns and parent concerns as a way to inform policy," said Schmidt. "If we didn't have that money, our ability to work that network and do that would be greatly limited."

Some agencies have tried to partner with organizations in and outside of child care to solve these problems, but their efforts are often small-scale and regional. The Pritzker grant will allow for deeper and wider collaboration aimed at addressing these issues at the state level, according to Schmidt.

"This isn’t about just expanding care. It has to be high-quality care," she said. "It really just puts us on this course and moves us forward with finally tackling this issue as a state."

While the planning grant’s dollar amount is small, Schmidt said it provides access to resources, consultation and assistance from key national groups, such as the National Collaborative for Infants and Toddlers and the Build Initiative.

Schmidt said she’s planning to use this opportunity to bring together "unlikely allies" not typically consulted or considered in discussions about child care. Representatives from health care, faith, workforce development and anti-poverty programs, along with elected government, will contribute to planning.

It also allows early childhood education leaders to bring together state and local organizations outside of child care to contribute and problem-solve. Representatives and advocates in elected government, health care, low income assistance, workforce development and religion will come to the table.

"We’ve got all these people who don't work in early childhood, it's not their world," said Schmidt.

She said that’s important because their perspectives will help better inform their policy considerations.