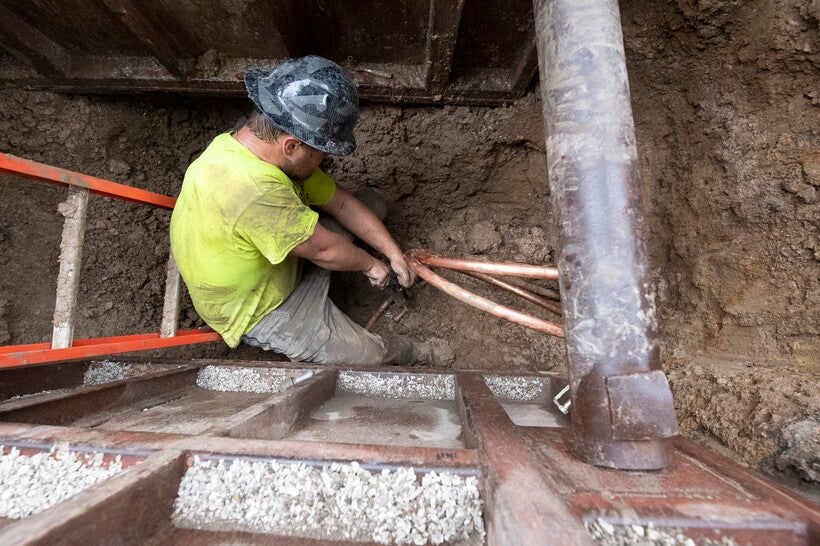 A worker who identified himself only as Nate flares copper tubing as a crew swaps out a lea.d water service line for copper pipes in Milwaukee on June 29, 2021. Since 2017, Milwaukee Water Works says it has replaced 3,881 pipelines made of potentially hazardous lead. Eliminating the city’s remaining 70,000 lead pipes at that pace would take more than 70 years and cost hundreds of millions of dollars. Isaac Wasserman/Wisconsin Watch

Federal environmental regulators have announced Wisconsin will receive $142.7 million to target removal of lead pipes, harmful forever chemicals and water challenges in underserved communities as part of the first allocation under the bipartisan infrastructure law.

The award is part of $44 billion in state revolving loan funds that will be distributed over the next five years to help state and tribal governments make long overdue upgrades to drinking water and wastewater systems.

Around half of the funding will be made available as grants or loans to provide to rural and urban communities.

"Billions of dollars are about to start flowing to states and it is critical that EPA partners with states, Tribes, and territories to ensure the benefits of these investments are delivered in the most equitable way," said Regan in a news release.

Assistant Administrator of the EPA's Office of Water Radhika Fox will soon issue guidance to state agencies on how they should use the funding provided under the law. In his letter, Regan urged states to correct disparities with funding, make progress on replacing lead service lines and provide relief to communities struggling with contamination from harmful perfluoroalkyl and polyfluoroalkyl substances (PFAS).

“Every Wisconsin community needs access to clean drinking water and an environment free of toxic chemicals. Now we have an investment that will create jobs and help make that a reality,” said Wisconsin Democratic U.S. Sen. Tammy Baldwin in a statement. “This is a major federal investment to help local communities in Wisconsin replace dangerous lead service lines and address PFAS contaminants so that we provide safe and clean drinking water to people across our state."

Wisconsin has hundreds of thousands of pipeline segments containing lead or other harmful materials, according to Wisconsin Watch. Milwaukee alone has roughly 70,000 lead service lines that could cost nearly $800 million to replace.

As for PFAS, state environmental regulators have detected 51 sites within 25 communities that have PFAS polluted groundwater. However, less than 1 percent of the state’s more than 11,000 public water supplies have been tested for the chemicals. PFAS has been found in public and private wells in communities across the state, including Peshtigo, Campbell, Marinette, La Crosse, Eau Claire, Rhinelander and Madison.

The funding under the infrastructure bill represents the single largest investment in water infrastructure in decades, but the needs are great. The American Society of Civil Engineers estimates Wisconsin water and wastewater systems need around $15 billion over the next two decades to address aging infrastructure.

Trains intended for unbuilt Milwaukee-Madison high-speed rail line going to Nigeria
'It becomes truer the older it gets': The Monkees' Michael Nesmith on 'Head's' heady ideas
$90M in new pollution controls approved for coal plant in southeastern Wisconsin
With fewer COVID-19 precautions at school and no mandates from their health department, some Waukesha County families feel stuck
How did Wisconsin Dells become 'the waterpark capital of the world'?