Wisconsin Politicians On Both Sides Of Aisle Decry Violence, Destruction In Madison

Wisconsin politicians on both sides of the aisle on Wednesday denounced a violent and destructive protest in Madison on Tuesday night that included the assault of a state senator, arson and property damage.

Madison Mayor Satya Rhodes-Conway also condemned the violence in a press conference later in the afternoon, while also acknowledging the need to address system injustice.

The protest began Tuesday evening and continued into the wee hours of Wednesday morning. It followed the arrest of a Black man on the Capitol Square who entered a restaurant with a megaphone and baseball bat, and created a disturbance.

Protesters dismantled two statues on the Capitol grounds, attempted to force entry to the Capitol building, broke glass on at least one government building, set fires and assaulted Democratic state Sen. Tim Carpenter of Milwaukee, who happened by the protest while walking to his office and was accosted after taking a photo with his phone.

In a tweet, Carpenter said he was punched and kicked in the head, neck and ribs by a group of eight to 10 people.

"I want to be clear: violence against any person—whether in the middle of the street in broad daylight, at home trying to sleep, going for a run, or happening upon a protest as was the case last night—is wrong," he said. "It should never be tolerated."

The governor said individuals who committed acts of violence would be held accountable. On Wednesday afternoon, he reactivated the National Guard to support local law enforcement at protests in Dane County.

"The Wisconsin National Guard will serve in a limited authorization meant to make sure people can exercise their First Amendment rights while ensuring the safety of members of the public and state buildings and infrastructure," Evers said in a prepared statement. He said troops "may not be used to impede the ability of people to peacefully protest or impede the ability of the media to report on this situation."

"Violently attacking a state senator and damaging state property does not, in any way, help to make positive change in our communities," said Assembly Minority Leader Gordon Hintz, D-Oshkosh. 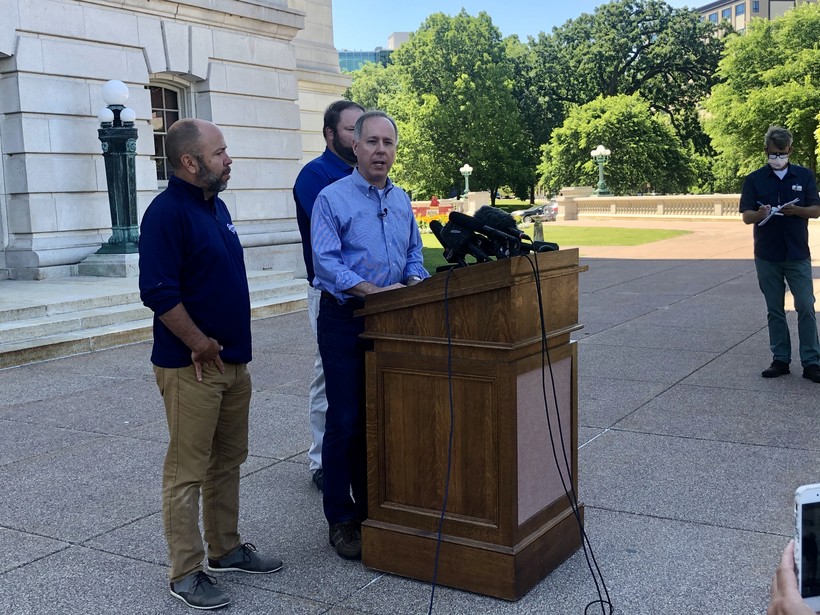 Assembly Speaker Robin Vos, R-Rochester, and GOP leaders decry a violent protest in Madison the night before during a Capitol press conference on June 24, 2020. Laurel White/WPR

Later on Wednesday morning, leaders of the Republican-controlled state Assembly gathered on the steps of the Capitol to criticize Evers and Rhodes-Conway, saying they didn’t do enough to staunch the violence and destruction.

Assembly Majority Leader Jim Steineke, R-Kaukauna, said police should have been called to the scene much earlier. Police in riot gear did not arrive on the Capitol Square until hours after the destruction and violence began. But according to an MPD incident report, pepper spray "was deployed from within the State Capital (sic) building to repel individuals who were attempting to force entry."

"This is a failure of leadership at all levels in the city of Madison," Steineke said, adding he believes protesters have learned "there are no consequences for their actions."

.@jimsteineke: “The city of Madison is in dire crisis right now.” pic.twitter.com/AnGc8rg7AN

"The governor must step up and immediately put an end to this violence. He cannot allow this to continue," said Fitzgerald. "The Mayor of Madison and the Dane County Sheriff need to stop hiding and use local police forces to better protect the seat of government."

In a prepared statement, Rhodes-Conway said people who committed crimes on Tuesday evening will be held accountable, but did not address how law enforcement would respond to future protests.

Rhodes-Conway later held a virtual press conference on Wednesday. During the conference, she called for accelerated court proceedings for Yeshua Musa, the Black activist whose arrest spurred the protests, and called for the police to look into incidents of vehicles hitting Madison protesters.

Rhodes-Conway also announced that city officials and the city's school board have reached an agreement to end a contract that stations police in Madison high schools. The Board of Education president had earlier announced that the board will meet next Monday to vote on the issue.

"We must now work together to redirect funding from police to new forms of youth and student support," Rhodes-Conway said.

Madison Alder Arvina Martin said alders and county board members met with "national experts" to discuss a program that "would change how and who responds to 911 calls that don't necessarily need police presence." She expects city and county leaders to work on the program in the coming weeks.

GOP leaders said Wednesday there is no timeline for lawmakers returning to the Capitol to take up changes to criminal justice laws in Wisconsin.

Vos said he has had conversations with Assembly Black Caucus chair Rep. LaKeshia Myers, D-Milwaukee, and believes lawmakers will be able to come up with a set of bipartisan proposals. He said there is support among Republicans for a ban on police use of chokeholds. He said many law enforcement officials say those holds are rarely used.

"Reforms need to happen, but the vast majority of police do a good job," he said.

Last week, Evers released a set of bills related to policing in Wisconsin. The proposals include the chokehold ban and statewide standards for police use of force.

Vos criticized the governor for not consulting with GOP lawmakers before releasing his proposals.

"We’re not going to negotiate with terrorists," Steineke said.

What Does The Law Actually Say About Vaccine Mandates?
A Lake Superior Tribe's Ancestors Were Removed From Their Home. Now, They Want Their Burial Lands Back.
Fascinating Facts About Loons From A Biologist Who's Studied Them For Decades
Wisconsin Home Sales Keep Rising, Even As The Number Of Homes For Sale Keeps Falling
Wisconsin Athletes Ready To Represent Team USA At The Olympics