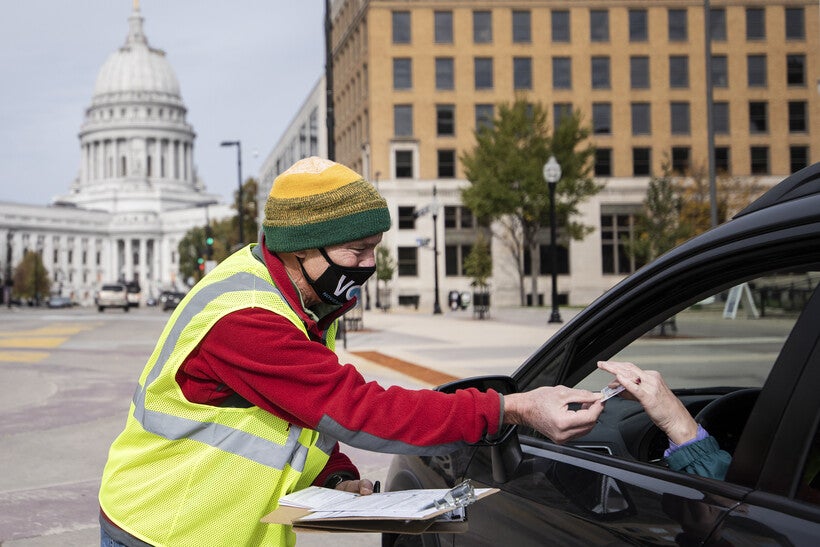 Poll worker Wade DallaGrana checks a voter’s identification Tuesday, Oct. 20, 2020, outside of the Madison City Clerk's Office. Voters have the option of voting from their cars or inside the building at this location. DallaGrana said things were very crowded this year because of the pandemic. Angela Major/WPR

With just one week until Election Day, Wisconsin election officials are urging voters to return absentee ballots in person, if they haven’t already done so.

According to the Wisconsin Elections Commission, about 320,000 ballots have been issued to Wisconsin voters that still haven’t been returned. Ballots must be in the possession of a local election official by 8 p.m. on Election Day to be eligible to be counted.

For months, officials have urged voters planning to cast their ballots by mail to account for a seven-day return trip through the U.S. Postal Service to their local clerk’s office. That means Tuesday is the final day officials recommend mailing ballots before Election Day.

"That’s what the Post Office says is the amount of time they need to get a letter in Wisconsin from Point A to Point B and make sure it gets there," said Reid Magney, spokesperson for the Wisconsin Elections Commission.

About 79,000 ballots arrived at clerks’ offices after Election Day for April’s presidential primary in Wisconsin, according to an Elections Commission study. A six-day extension for accepting ballots, granted by a federal court, allowed those ballots to be counted. On Monday, the U.S. Supreme Court ruled against granting a similar extension for the upcoming election.

Magney said the best way for voters to return mail-in ballots after Tuesday is to hand deliver them to their municipal clerk’s office.

Some voters may also be able to drop their completed ballot at their polling place on Election Day, but not every voter might do so. There are 39 communities in Wisconsin that use "central count" locations for absentee ballots, which means absentee ballots can't be counted at polling places on Election Day. Communities with central count locations include Milwaukee, Green Bay, Kenosha, Janesville, Beloit and Superior.

"Voters need to follow the instructions that came with their ballot," Magney said. "It’s hard to do a one-size-fits-all prescription across the state (for returning ballots)."

Magney also noted voters are ineligible to vote in person if they have put their completed ballot in the mail to their clerk, regardless of whether that ballot has been received by the clerk by Election Day.

If a voter has already mailed their ballot and decides to vote in person instead, the only way they may do so is if their mail-in ballot is received before 5 p.m. on Thursday and they call their clerk to have it destroyed (this is called "spoiling" the ballot).

Voters can check to see if their ballot has arrived at their local clerk’s office by visiting the MyVote Wisconsin website.