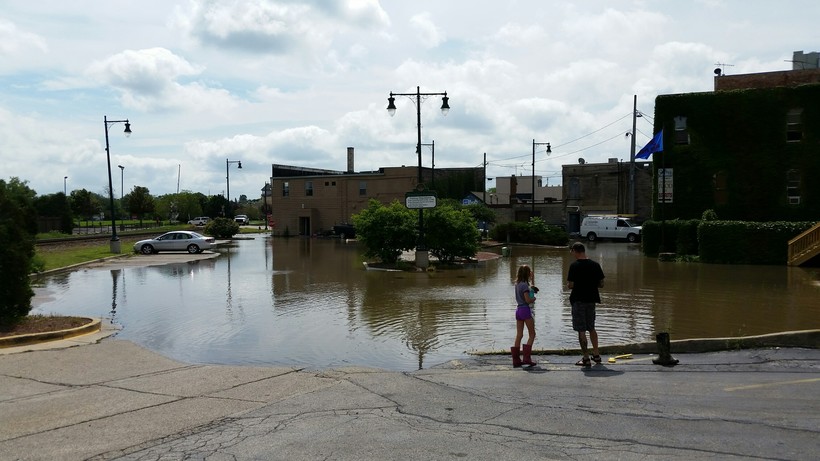 Part of a parking lot remains flooded in Burlington, Wisconsin on Thursday, July 13, 2017, after storms Tuesday into Wednesday. Chuck Quirmbach/WPR

Vos: 'Big Victory' Only Property Harmed During Flooding
By The Associated Press and Abby Ivory-Ganja
Share:

Wisconsin emergency management officials say flood waters are beginning to recede in Burlington but thousands are still without power and the state Department of Natural Resources is monitoring a dam that sustained damage.

Water levels for the Fox River were just over 14 feet high Friday, down from 16 feet Wednesday, according to the National Weather Service.

The Fox River in Burlington is expected to drop out of flood stage by Wednesday, said Wisconsin Emergency Management spokeswoman Lori Getter.

She said the city is beginning recovery efforts, including gathering information for damage estimates. About 4,000 homes were still without power Friday and the four bridges spanning the river remain closed.

She added the DNR is monitoring a dam that sustained a small amount of damage. She said officials plan to draw down Echo Lake over the next two weeks, which should help alleviate pressure on the structure.

"With a tornado, you have the incident occur and then it’s clean up, but with this flooding, it’s going to take us time," she said. "We have to wait for the water to recede and for people to get a good idea of the damage to their homes, and also so we can see the damage that’s been caused to infrastructure."

Getter said officials are slowly moving into the recovery phase.

About 100 Wisconsin National Guard soldiers are in the city to help local officials with traffic control, welfare checks and sandbagging.

"We’re still having National Guard soldiers on the bridges to keep people off. We’re still doing safety checks to make sure everyone’s accounted for and if they need help," she said.

Getter said there have been no reported deaths so far.

The historic flooding forced businesses in Burlington to close while waiting for power to be restored, but residents are upbeat as cleanup efforts begin.

Bob Koldeway owns a bike shop in town and was spending the day Thursday mopping and drying the floor of his store after it flooded with more than 2 inches of rain Wednesday.

About 6 inches of rain hit Burlington early Wednesday morning, causing flooded basements. Many businesses and homeowners are pumping water out of basement and throwing out flood-damaged items.

Wisconsin Republican House Speaker Robin Vos, who owns a factory in town, called it a "big victory" that only property was harmed during the flooding.

On Thursday, Gov. Scott Walker declared a state of emergency for Racine, Kenosha and Walworth counties