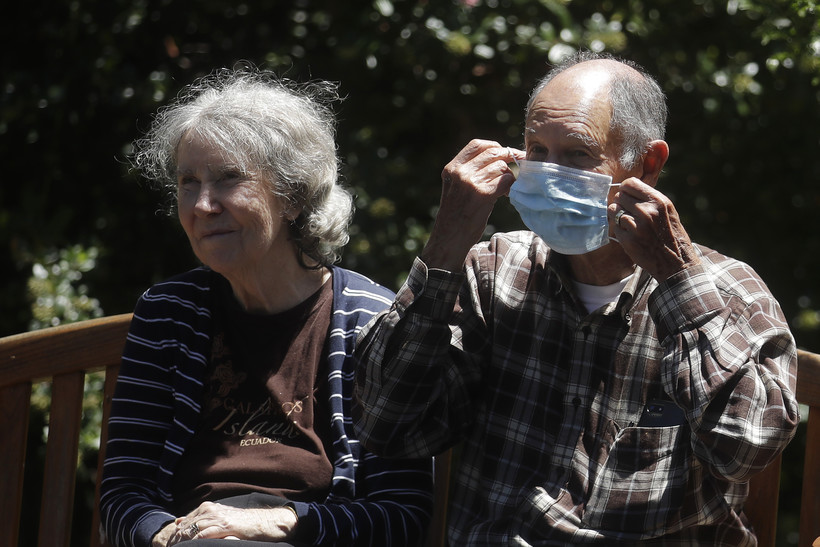 Larry Yarbroff, right, adjusts his mask as he sits with his wife, Mary, while visiting her at Chaparral House in Berkeley, Calif., Friday, July 10, 2020. Jeff Chiu/AP Photo

As the number of coronavirus cases in Wisconsin continues to grow, nursing homes across the state say they’re struggling to get the personal protective equipment they need.

An investigation from the New York Times showed nursing homes in Wisconsin were among those to receive faulty equipment from the federal government, including gowns that look like garbage bags. Nursing home administrators told the Milwaukee Journal Sentinel that much of the equipment has gone unused.

St. Paul Elder Services in northeast Wisconsin has found it particularly difficult to get isolation gowns during the coronavirus pandemic, to the extent that it’s put out calls on social media to have local seamstresses make them, said president and CEO Sondra Norder.

"I wish that the Defense Production Act had been invoked a long time ago for the production of disposable isolation gowns," she said.

St. Paul Elder Services received two shipments from the Federal Emergency Management Agency as part of a $134 million plan from the Trump administration to provide thousands of nonprofit nursing homes across the country with 14 days’ worth of free PPE.

"We have never seen black gloves in health care before," Norder said. "I’ve seen them used by colorists in salons."

There was no indication whether the gloves were latex-free, so staff didn’t feel comfortable using them, she said.

"We received 690 of the blue, plastic — what’s been called the glorified garbage bags. Those gowns which weren’t even labeled gowns, they were labeled aprons," she said.

Emily Karls, administrator at Shorehaven in Oconomowoc, said two types of blue, plastic gowns arrived from FEMA. The ones that tied in the back were OK, but the Wisconsin Department of Health Services advised nursing homes not to use ones that had to be pulled overhead for safety reasons, she said.

Isolation gowns are important because they help prevent staff members from spreading viruses as they go room to room, helping residents brush their teeth or get dressed, Karls said.

Shorehaven also received thin cloth face masks from FEMA, which are no replacement for surgical masks, she said.

FEMA received complaints on less than 1 percent of the PPE it sent to nursing homes, according to a representative from the agency, which declined a request for an interview with Wisconsin Public Radio.

"We continue to engage with nursing homes to keep lines of communication and feedback open at all times to help address concerns," FEMA said in a statement.

Karls is constantly in fear of not being able to provide her staff the safety equipment they need, she said. Some PPE items are now impossible to get, while others have soared in price, she said. Shorehaven used to work with two or three vendors, now it has five or six. For the first time in her career, Karls is also asking staff to re-wear PPE in certain scenarios, she said.

"It has been so challenging, it has been so stressful, and once this is over, I never want to talk about PPE again," she said.

St. Paul Elder Services has enough surgical masks, gloves and eye protection for now. But skilled-nursing facilities across the state have a critical need for N95 masks, Norder said.

The respirators should be fit-tested before use, but it’s nearly impossible to find a test kit, Norder said. St. Paul Elder Services borrowed one from a local fire department, and her husband, who was trained to fit test N95 masks for his own job, taught Norder how to do it properly.

Ultimately, all staff members were fit-tested for the random assortment of N95 masks that St. Paul Elder Services received as donations, scrounged from the maintenance department or purchased, though they’re still hard to find and expensive to buy, Norder said.

The state of Wisconsin sent St. Paul Elder Services one box of N95s — 10 masks total — as part of a promotion for its mask decontamination system, she said.

"The overall government response to this pandemic has been a failure in terms of preparedness, in terms of testing strategy, in terms of support to long-term care facilities that are protecting the most vulnerable among us," she said.

Shorehaven is also running low on N95 masks, Karls said. After a staff member tested positive for COVID-19, two units went on quarantine for two weeks, requiring N95 masks and other PPE to prevent possibly spreading the virus. Fortunately, no other staff members or residents tested positive, but it depleted their reserves, she said.

The N95 masks Shorehaven typically buys have increased about five-fold in price, she said. Even when they order them, there's no guarantee the masks will arrive, she said.

"It's kind of like Christmas morning when you're getting your shipment from the supplier in, and then it's like, 'OK, what did we get?'" she said. "You're so excited and hoping you got good stuff."

People may be able to help by wearing cloth masks instead of surgical masks as they run errands, especially as a growing number of stores and municipalities are requiring masks, she noted.

And for Shorehaven, the challenges of the pandemic go beyond acquiring PPE.

Some of its residents are on Medicaid, which has made it tough to cover the growing costs associated with keeping patients safe from the coronavirus, Karls said. The government has provided some financial help, and Waukesha County has donated some supplies. Changing and conflicting guidance from the state and federal governments has also made things difficult.

According to a report from the Kaiser Family Foundation, long-term care facilities account for just 3 percent of Wisconsin’s COVID-19 cases but 42 percent of its deaths, underscoring the importance of protecting residents and staff.