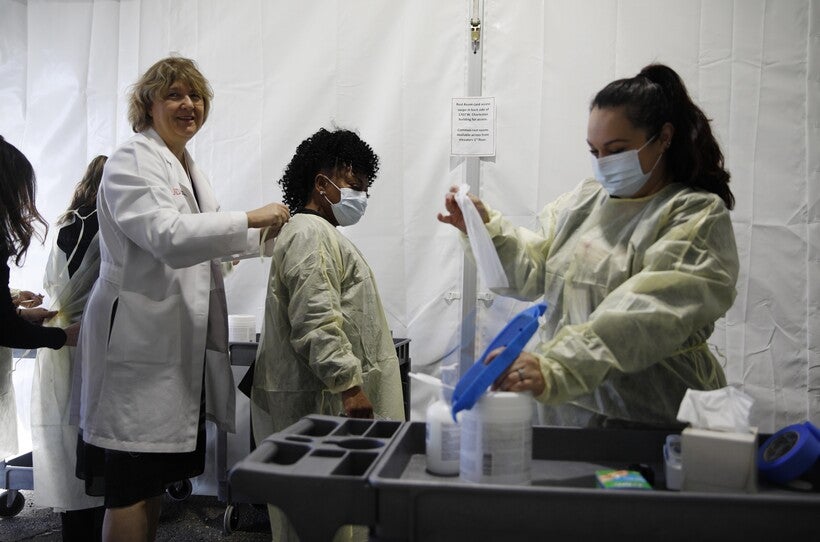 Doctors and health care workers with the UNLV School of Medicine suit up in personal protective equipment before taking patients at a drive thru coronavirus testing site Tuesday, March 24, 2020, in Las Vegas. UNLV Medicine, the clinical arm of the UNLV School of Medicine, started conducting COVID-19 testing by appointment for people who meet the Centers for Disease Control and Prevention guidelines. John Locher/AP Photo

For 20 days in April, nurse Elizabeth Riley's day would begin by looking for coverings for her shoes. Then, she would put a shower cap on her hair and secure her one N95 mask that would need to last for the next five days.

Over the N95 mask, Riley and her colleagues would layer a paper surgical mask because their single N95 mask would be exposed to the COVID-19 virus, then they would top it off with a plastic face shield. 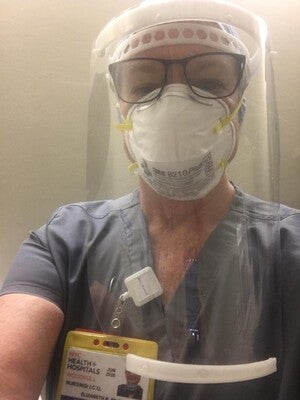 Sometimes, she couldn’t find covers for her shoes.

"I had to take those blue ... hats like shower caps and put two of those over each foot, and they're really slippery and hard to walk around in," she said. "But I needed to have my feet covered because I'm walking through COVID all day."

At the beginning of April, Riley, a registered nurse in Barron County, answered New York Gov. Andrew Cuomo's call for medical professionals to come to New York City to help fight the coronavirus outbreak that has infected nearly 200,000 people in the city.

And even with all the protective equipment and precautions, she too became infected with COVID-19. She said she got it in New York, but was unable to get tested until she returned to Wisconsin. She has been slowly recovering since she got home. For more than three weeks, she has been isolating and trying to keep her husband from also getting infected.

"Usually, I just stay up in my room so that there's no possibility of me infecting him," she said. "But otherwise, I wear a mask and we stay 10 feet apart and I can't really touch anything that he's going to touch."

While on the mend, she still can’t smell or taste, easily experiences shortness of breath and is exhausted.

Riley hadn't worked in an ICU for years when she reached out to an emergency staffing company looking for nurses to volunteer to go to areas hit hard by COVID-19.

"I explained that it was years and years ago that I'd had ICU experience, but I felt like I could learn it again," she said. "And they said, 'Great … can you get here tomorrow?' That was how fast this whole thing happened."

She was assigned to Woodhull Medical Center in Brooklyn. Initially, she was in an ICU that had been built to be one — it had glass doors so that medical providers could see the patient's and their beds were close enough to the doors that IV pumps could be replaced without having to enter the room.

Eventually, a medical surgical unit had to be transformed into a makeshift ICU because of the number of patients who needed ventilation, Riley said. She spent the first few days in the real ICU, then was moved permanently to the makeshift ICU.

"It was in theory, a good idea, but in practice it was very difficult to manage because it wasn't set up to be an ICU," she said. "The doors are all wooden doors and you can't see through them. But if you open them up, then you run the risk of infection or virus getting out into the hospital."

Easter Sunday was particularly difficult, she said. They had seven code blues — a medical emergency like cardiac or respiratory arrest — that day.

"Of those codes, we had three deaths and we would barely get a code card put together again and then somebody else would code, and it felt like there was nothing but death everywhere," she said.

Riley primarily treated patients who were on ventilators. She described the situation as like walking into a different world every day. During her time there, not one person she treated on a ventilator was taken off.

"They can't talk because they're ventilated and sedated," she said. "You talk to them and hope they can hear you and understand so they're not frightened."

Every morning on her bus ride to the hospital, Riley would write for about 30 minutes to arrange her thoughts and process what was happening.

She wants people to understand that COVID-19 isn't just the flu.

"It's a terrible disease, it's very difficult to deal with and it's easy to get," she said. "I had all the protective equipment I needed and I still got it." 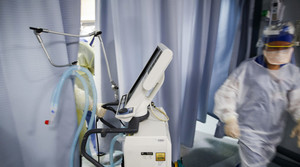 More than 180,000 cases of the coronavirus have been reported in New York City. A Wisconsin nurse shares her experience on the frontlines after working for 20 days at a Brooklyn medical center. Plus, we’ll look closer at her recovery process after being diagnosed with COVID-19.