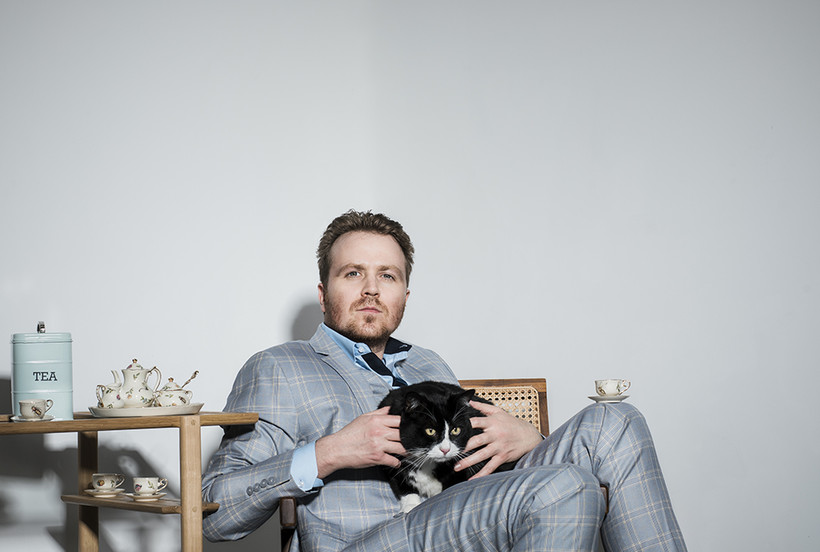 Growing up, Gareth Reynolds always knew he wanted to pursue a career in comedy. The Brown Deer, Wisconsin native joined his high school’s ComedySportz club and would later graduate to the professional circuit as a member of the Milwaukee branch of the improv troupe.

"Because of ComedySportz and doing theater and things in high school, I was like 'OK, well now I know what I want to do and then I had to figure out how the hell to do it,'" Reynolds told WPR’s "BETA."

Reynolds, who now lives in Los Angeles, returned to his home state last fall where he recorded his debut album, "Riddled with Disease" (recorded at The Comedy Club on State in Madison) and a few episodes of the popular history and comedy podcast, "The Dollop" he co-hosts with fellow comedian Dave Anthony.

Reynolds is the son of English immigrants and jokes that growing up in the Milwaukee area was sometimes a culture clash.

"There would be Milwaukee traits that I would take on that my little English mother would be puzzled and disturbed by," said Reynolds. "It was also cool because I was able to be incubated by the English culture and then really was exposed through my friends and through social situations to Wisconsin and the things I embrace and love about Wisconsin."

On his album, Reynolds riffs on a track called "Father Time" about his dad’s funny tick about always reminding him of the time and the time difference between Milwaukee and LA.

"You’re very aware now with phones when someone calls, but my father, when he leaves me voicemails will be like '2:30 p.m. here in Wisconsin, 12:30 p.m. your time,'" Reynolds said laughing. "I’ve made fun of him so much about it that now he just texts me 'call me when you can.'"

Reynolds feels a strong affinity for Wisconsin, admitting that the only tattoo he has is of the Green Bay Packers logo. He says it demonstrates not only his love for the team, but a hometown pride. That’s why Reynolds felt it was important to return to Wisconsin to record his album.

"I do feel a particular connection to Milwaukee and Wisconsin and people from the Midwest in general because I think there is a culture that I just find so familiar. And there’s also, I think, the attitude of people is so refreshing," he said, "And, I think there’s something nice about sharing the stuff you do with people you grew up with or with your parents or your family."

Reynolds got his break on NBC’s short-lived hidden-camera farce "The Real Wedding Crashers" which he lightheartedly describes "as creatively stimulating as it was successful." However, it positioned Reynolds both creatively and logistically to navigate the entertainment industry.

"There were connections I made through that show that behooved me for years and years to come, but little of it was from the actual show," Reynolds said. "I met Steve Byrne who became a guy who took me under his comedic wing and got me on the road doing stand-up."

Uninspired by the show’s content, Reynolds and his writing partner, Evan Mann, began creating their own ideas and would eventually wind up in the writer’s rooms for some of the most innovative TV comedy series of recent years including Mitchell Hurwitz’s trendsetting hit, "Arrested Development."

"Mitch Hurwitz was so good to my writing partner and myself," said Reynolds. "He moved us up to executive producers, which just is not protocol for that to happen in a year — for someone to change your credit — and Mitch really went to bat for us."

In 2014, Reynolds was slated to be the first guest on comedian Dave Anthony’s history podcast, "The Dollop," but the two clicked so well that Gareth ended up being the show’s permanent co-host.

"Part of the reason I think he asked me was because when we had been on shows together we had a lot of fun and we were making each other laugh," Reynolds recalled. "And it from there just grew. We developed a good working relationship and friendship and I think it helped the show blossom."

Reynolds hopes to build on his success going forward. There’s more touring ahead for both "The Dollop" and his stand-up career and much more writing as well.

"Every year just seems to get a little better so I have no complaints," said Reynolds. "It’s truly a busy life, but a charmed one in many ways."