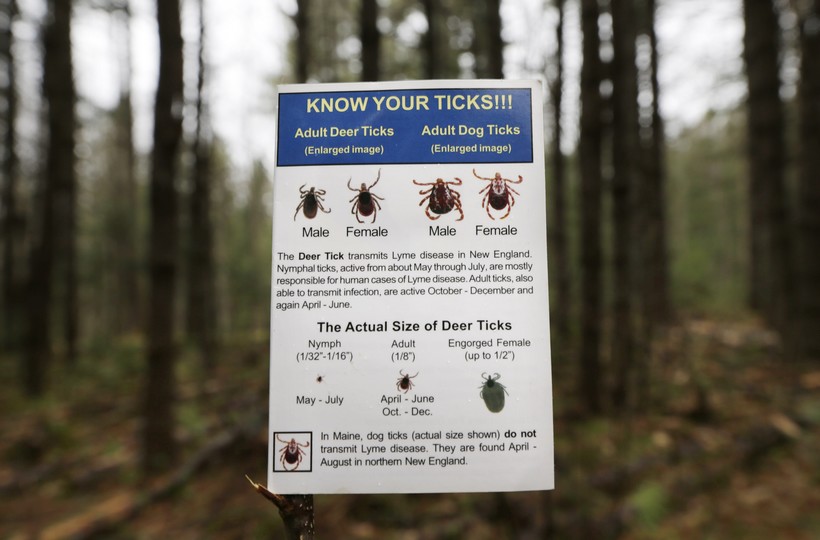 In this photo made Friday, May 9, 2014, an informational card about ticks distributed by the Maine Medical Center Research Institute is seen in the woods in Freeport, Maine.

Wisconsin May Dodge Lyme Disease Spike Projected For Northeast US

Wisconsin may not see the same spike in Lyme disease that’s expected this year in northeastern states.

Scientists in New York are projecting a big spike in Lyme disease cases in the eastern United States.

Their projection is based on a sharp increase there in the number of mice, which are often covered in Lyme disease-carrying ticks.

Susan Paskewitz, professor of entomology at the University of Wisconsin-Madison, began checking Wisconsin sites in response to the news, to see if this state's mouse population was also growing.

"What we found was no suggestion than in the three places where we looked, that we had seen any kind of a large spike last year that would indicate problems this year," she said.

But she said even a typical year of Lyme disease cases in Wisconsin is a concern, because the disease that was once largely concentrated in northwestern Wisconsin has spread.

"(Ticks) have really moved into almost every piece of woods that we go and visit," Paskewitz said. "We find them in Door County now, we find them down in Kenosha County, wherever there are woods.”

The Department of Health Services confirmed 1,300 cases of Lyme disease in 2015, with many more suspected cases.

The number of Lyme disease cases has trended upward as the state's climate has become warmer and wetter.

Because of that, Paskewitz said anyone who spends time outdoors in Wisconsin this year should take precautions against ticks, such as using insect repellant and conducting regular tick checks.