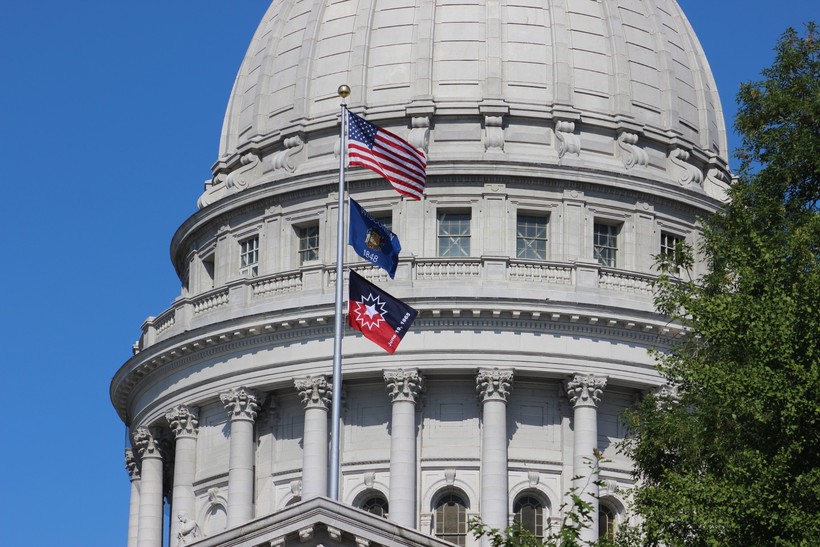 The Juneteenth flag was flown with the state and U.S. flags at the Wisconsin State Capitol building on Friday, June 19. Bridgit Bowden/WPR

As the holiday's flag flies over the Wisconsin State Capitol building for the first time, people are gathering across the state on Friday to mark Juneteenth with in-person and virtual protests, rallies and celebrations.

Franzetta Lee of Northcott Neighborhood House in Milwaukee said she was "ecstatic" when she heard about Gov. Tony Evers' executive order to mark what she calls a "joyous day." The 155-year-old holiday marks the anniversary of the day that a group of enslaved people in Galveston, Texas, learned they were free after the end of the U.S. Civil War.

Northcott Neighborhood House organizes the annual Juneteenth Day Street Festival, but Lee said that event won't be held this year because of the COVID-19 pandemic. They will instead hold virtual events, including segments on Juneteenth history on WTMJ-TV.

A number of groups that have led protests following the death of George Floyd are organizing in-person rallies, marches and community events for Juneteenth weekend. 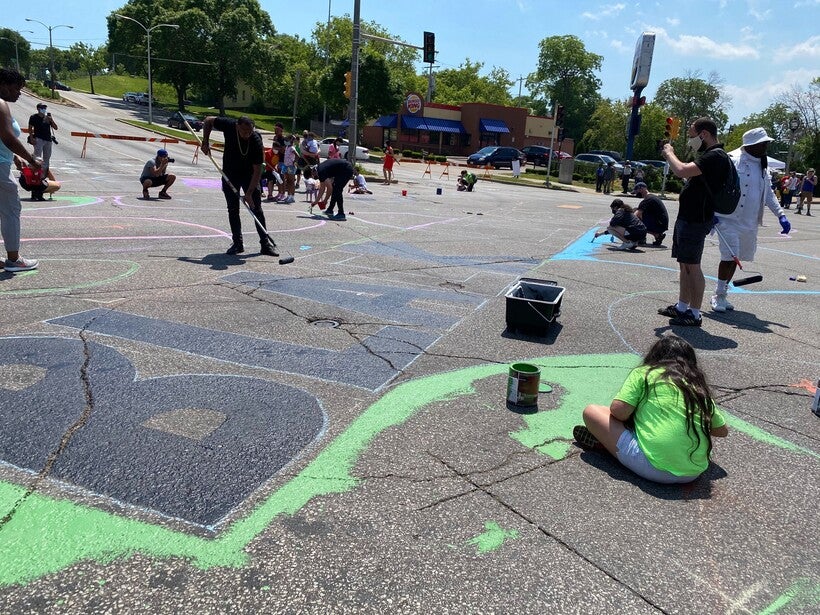 Hill said he wanted to paint something that was bright and beautiful, but make sure the statement — Black Lives Matter — wouldn’t be lost.

The letters were painted black across the intersection. Hill set off the words with green, purple, orange and blue designs, outlined by him and painted by dozens of children and community members.

"It’s beautiful, it’s inviting, and it’s an intersection for the community, the police and the community they serve," Hill said.

Jasmine Bounds attended the celebration with her mother and daughter, Zuri, 3, who painted the street purple while she danced with her grandmother.

This is 3-year-old Zuri Bounds painting what might turn out to be the best part of the #BlackLivesMatter mural. #JuneteenthDay pic.twitter.com/cCKJpTe10J

"Art is amazing, art saves lives and I feel like coming together through art is just so revolutionary," Bounds said.

Other events in Milwaukee planned for Juneteenth include a protest and block party, and a sit in.

Organizers in Madison kicked off a Juneteenth gathering at Olin Park at noon Friday.

Awa Phatty, a rising junior at Memorial High School and member of the Black Student Union, was registering people to vote at Friday's event, a task she described as crucial "because representation matters within whatever community you are in."

She and fellow Black Student Union member Grace Korger would like to see more people of color and young people vote in upcoming elections. 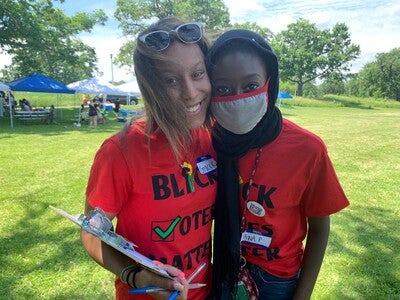 "The Black vote matters a lot, especially youth that are coming in, Millennials and Gen Z, because those are the people who are going to be electing our officials who will have our best interest," Phatty said. "That plays a big role in getting our right to make sure there's equity and equality and it all goes based off who is in power and who can make those decisions."

Phatty would also like to see Juneteenth become a national holiday.

"I would love to see it as an actual holiday because it is really important to African American people ... and I feel like we need to acknowledge that. And it'd be great if we could see people from all walks of life coming to join the celebration," she said.

After the gathering at Olin Park, organizers plan to lead a 6 p.m. "March to Freedom" to the Dane County Jail calling for the release of Black inmates and cuts to police funding. Organizers with Freedom Inc. and the Free The 350 Bail Fund plan to bail out four inmates from Dane County Jail Friday evening, and will continue to bail people out throughout Juneteenth weekend.

"Juneteenth is all about honoring the fact that in order for Black people to be free, that took Black resistance. And what better way to celebrate Juneteenth than to take action to actually defund police," Freedom Inc.'s Mahnker Dahnweih said. "Today we’re going to take action in alignment with Movement for Black Lives which is a global ecosystem of Black, Queer, Trans and Intersex-led organizations that say 'enough is enough.' We fighting for all of us to get free."