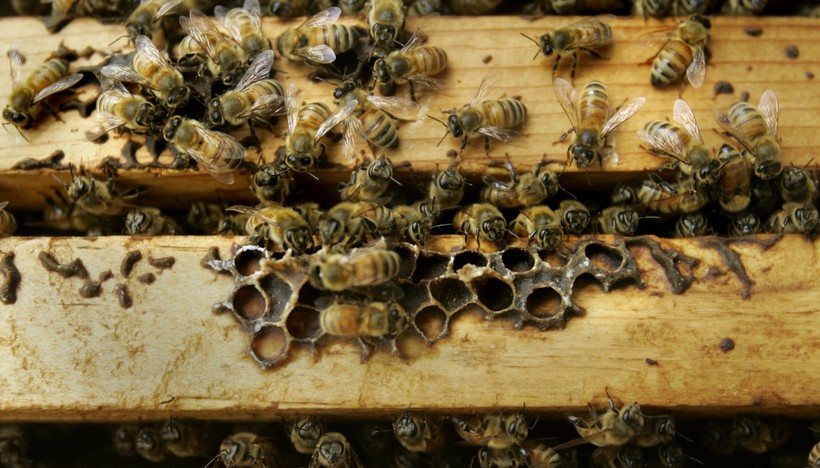 Honeybees are seen inside a colony at the USDA's Bee Research Laboratory in Beltsville, Md., in this April 25, 2007 photo. Haraz N. Ghanbari/AP Photo

Wisconsin honey production fell for the third year in a row in 2018.

The state produced 2.3 million pounds of honey last year, according to a report from the National Agricultural Statistics Service. That's 23 percent less than in 2017.

Kent Pegorsch, president of the Wisconsin Honey Producers Association, said weather was the main reason honey production fell in 2018 — starting with the snowstorm that hit many parts of the state in April.

"All of the plants were set back. And then when we did get weather, we either got too warm of weather and not enough rain or too cool of weather and too much rain," said Pegorsch, who owns Dancing Bear Honey in Waupaca.

He said rain washes the nectar out of flowers and it can take several days for plants to build up enough for bees to collect it.

Pegorsch said the tough weather conditions were consistent across most the state, leading to the significant decline in honey production.

But he said changes in agricultural practices have also had an impact on the industry over time.

Pegorsch said increased pesticide use and a shift to larger fields with fewer fence rows have affected habitat for pollinators.

"These fence rows in years past were important areas for honeybees and pollinators to gain nectar and pollen, their food sources, throughout the year," Pegorsch said. "Now, we’re seeing the honey season more compressed into a very short period in the summer when the crops that are there for the honeybees are available for them to collect food from. But in the spring and fall, there's just not enough food sources for the bees."

Parasitic mites called varroa mites have also plagued honeybee colonies across Wisconsin and many other states.

Pegorsch said he believes the agriculture industry is paying more attention to honey producers and working to improve conditions for pollinators.

But he said all of the challenges definitely cause concerns about profitability in the honey industry.

"We’re forced to spend a lot more time managing our honeybees now than we were 10 or 20 or 30 years ago. We have to spend a lot of time with each colony to make sure that it's in optimal health," Pegorsch said.

Pegorsch said many Wisconsin producers see high demand for their product due to new markets like the brewing industry and specialty soda makers.