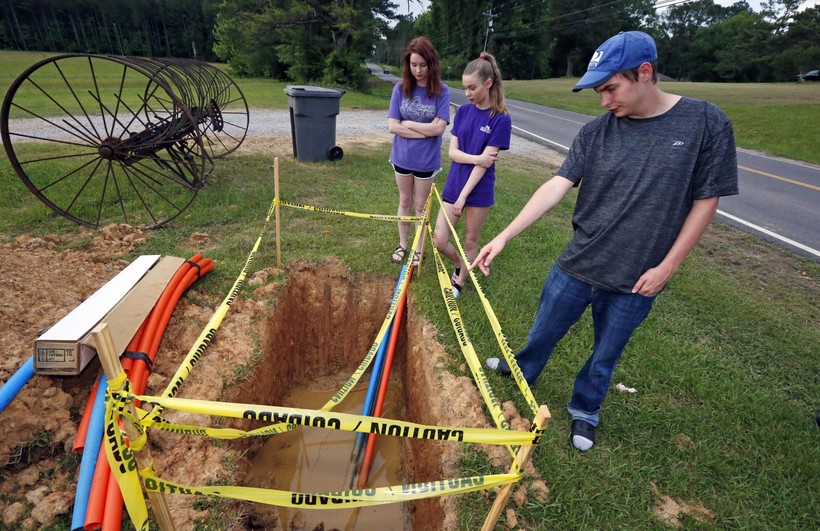 In this May 8, 2019, photograph, Riley Shaw, right, and his youngest sister, Leah, center, and his twin, Abigail, stand around a fiber-optic line that is expected to bring the Shaw family internet service to their home outside Starkville, Miss. Rogelio V. Solis/AP Photo

Wisconsin Has A Goal Of Broadband For All By 2025

Wisconsin's broadband infrastructure consistently ranks near the bottom of states in the nation. In 2018, Wisconsin was ranked 32nd for internet access, out of all 50 states.

"It’s a lofty goal and one if we can hit it that would be fantastic," said Testin on WPR's "The West Side." "I think it sends a strong message that this is an issue that has bipartisan support that we can all get on board with and ensure that we can connect every corner of the state."

Testin has authored bills to improve broadband infrastructure and said both the state and federal government are working to improve internet access in Wisconsin.

At the state level, Testin said the Public Service Commission (PSC) has created broadband expansion grants for small providers that typically serve rural and underserved areas. He said between 2014-2018, the state has helped connect more than 4,000 businesses and 75,000 households with high-speed internet.

But it won’t be easy connecting the entire state, especially in rural areas where there is little competition from telecommunications companies that can install the hardware needed to connect people to broadband.

"It would take an overlay of multiple technologies," said Steve Bauder, director of engineering for the Wisconsin Educational Communications Board. "There are areas that are much easier to get to with fiber, but there are areas where there is such a sparse population, it’s just hard to make fiber pay and that’s where wireless comes in."

Changes At The Federal Level

"We can do a deep dive into the mapping of the areas to make sure were getting an accurate assessment as far as where the connection is occurring and where it’s pulling up short and then assessing the multitude of programs that are meant to address it," Kind said.

"That I think is part of the problem. It‘s just so multifaceted. So many different federal and state agencies and programs. To try to coordinate all that and maximize the resources that we have is a real challenge moving forward," he added.

Kind represents the largely rural 3rd Congressional District which includes parts of western and central Wisconsin. He said a few of the rural counties in his district don’t have access to high-speed internet.

"It’s not good for economic development. It’s not good for making sure that the rural areas have a chance to succeed in a 21st century global economy. It’s crucial for families, businesses and farmers, but it's essential for young people," Kind said. "If we don’t want to see a flight of young people from rural to urban, you’ve got to get them broadband connection or they’re going to move where they can get it."

Local Governments Get Involved Too

Local governments in Wisconsin are also getting more involved in the issue.

In recent years, Buffalo County lost 100 jobs when a cheese factory and a power plant shut down.

While that may not seem like a lot of jobs, for a rural county on the banks of the Mississippi River, it was significant. Buffalo County has just over 13,000 residents, the sixth smallest county by population in Wisconsin.

In the wake of the lost jobs, the Buffalo County Board of Supervisors formed an economic development committee to study what could be done to bring more jobs to the area.

"One of the things the study said is if we’re going to go into the 21st century we need broadband all over the county," said David Danzinger, a Buffalo County supervisor.

He’s since joined Buffalo County’s Broadband Advisory group, a volunteer organization that is looking for ways to bring high-speed internet to as many residents as possible.

Buffalo County was one of the first local governments in Wisconsin to sign up for the Broadband Forward program through the PSC. There are now 35 Wisconsin communities in the program.

"You need to try to get everyone to sit down at the table, that's the big thing. There are different players here. There are these large companies, AT&T, Frontier and then we have the co-ops in the county," Danzinger said. "They both have a little different business plan. You have to sit them all down and try to work out something."

Editor's note: WPR Wisconsin Public Radio is a service of the University of Wisconsin-Madison and the Wisconsin Educational Communications Board.