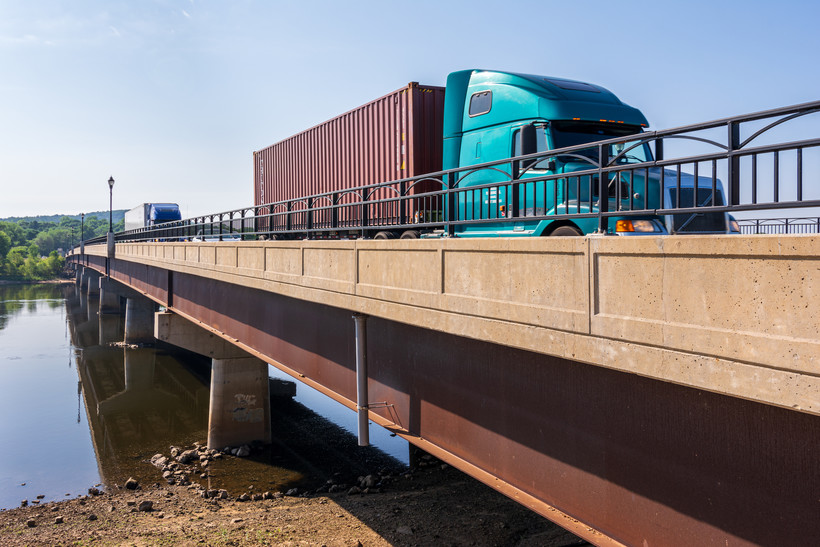 A semitruck on the Highway 12 bridge crossing over the Wisconsin River in Sauk City, Wis. on June 11, 2021. Bill Martens/WPR

Supporters say it will improve air quality, but the trucking industry fears it may force some out of business
By Danielle Kaeding
Share:

A proposal by federal environmental regulators to limit pollution from heavy trucks is being welcomed by Wisconsin health and environmental advocates. But the state’s trucking industry fears it will put small operators out of business.

In March, the U.S. Environmental Protection Agency proposed a new rule for the first time in two decades that would require heavy trucks to cut nitrogen oxide emissions by up to 90 percent from current standards by 2031. Those emissions, when combined with heat and sunlight, can cause smog or ozone pollution that’s known to worsen asthma and other respiratory problems.

Milwaukee County Executive David Crowley said in a virtual briefing Thursday that Wisconsin needs the strongest safeguards against truck pollution that will set the state on a path toward zero-emission trucks by 2035.

"By investing in cleaner trucks and cleaner buses, we will reduce harmful pollution and ensure our most vulnerable communities in Wisconsin have cleaner air," Crowley said.

"When you look at the fact that you're dealing with increased insurance premiums and outrageous fuel prices, driver shortages, technician shortages — these are all concerns for operators that are operating on very razor-thin margins to begin with," said Kedzie.

Milwaukee County had the highest rate in the state for emergency room visits due to asthma with 17,454 visits from 2018-20, according to the Wisconsin Department of Health Services. More than half a million residents in Wisconsin suffer from asthma that’s often made worse by nitrogen oxide emissions from the tailpipe and power plants.

Reducing heavy truck pollution is expected to prevent 18,000 cases of asthma and up to 2,100 premature deaths, according to the EPA. The agency estimates the new regulation would also avoid 1.1 million lost school days and 78,000 lost days of work.

Kyle Johnson, political director for Black Leaders Organizing for Communities, said the standards would be a step toward correcting environmental injustices that Black communities have long endured.

"My two older sisters and I were diagnosed with asthma as children, and more than 20,000 people die prematurely every year due to pollution," said Johnson. "We can and we must do better."

If approved, the pollution regulations would limit tailpipe emissions starting in 2027. The cost of implementing the new regulation is expected to provide economic benefits up to $250 billion due largely to reducing health care expenses. The EPA estimates it would cost around $27 billion to put in place.

The agency said the proposed restrictions are in line with an executive order issued by President Joe Biden to transition to zero-emissions vehicles. Transportation accounts for the largest share of heat-trapping emissions that contribute to global warming.

Kedzie, the trucking association president, said larger fleets may be able to absorb costs of shifting to new technology, but he fears smaller operators would be forced out of business. He said the industry has supported efforts to reduce pollution and questioned whether existing technology could cut nitrogen oxide emissions by 90 percent. The EPA contends current technology can reach 75 to 90 percent reductions from current standards.

Kedzie also added electric trucks are expensive and cost up to $400,000 per vehicle. The International Council on Clean Transportation, an independent nonprofit organization, estimated electric trucks currently cost around two to three times their diesel counterparts.

Cost is the largest barrier to electric vehicle adoption, according to Giri Venkataramanan, a professor of electrical engineering at the University of Wisconsin-Madison.

"Obviously, you save in the longer term because you could charge your vehicle from a plug, and the electricity is cheaper than gasoline today," said Venkataramanan. "But that is a very, very slow payback."

The upfront cost of purchasing electric vehicles is a burden that lies on the carrier, said Kedzie. He argued the electric vehicle industry isn’t ready to accommodate long-haul trucks. Venkataramanan agreed heavy trucks often run many hours a day which makes it difficult to replenish the amount of energy needed to continue operating efficiently.

"There has to be some sort of infrastructure in place to do fast-charging or swapping out and things like that," said Venkataramanan. "And those are questions that industry is thinking about, and the federal government is thinking about, on how to enable that."

The recently enacted Inflation Reduction Act includes an electric vehicle tax credit of up to $7,500 for the next 10 years. The bipartisan infrastructure law passed last fall is providing $5 billion to states to help build out charging infrastructure along highways, including $79 million over five years for Wisconsin.

Venkataramanan said throwing money at the issue won’t allow the transition to happen overnight. He’s confident there will be solutions to ongoing challenges, but he said that will take compromise and time.