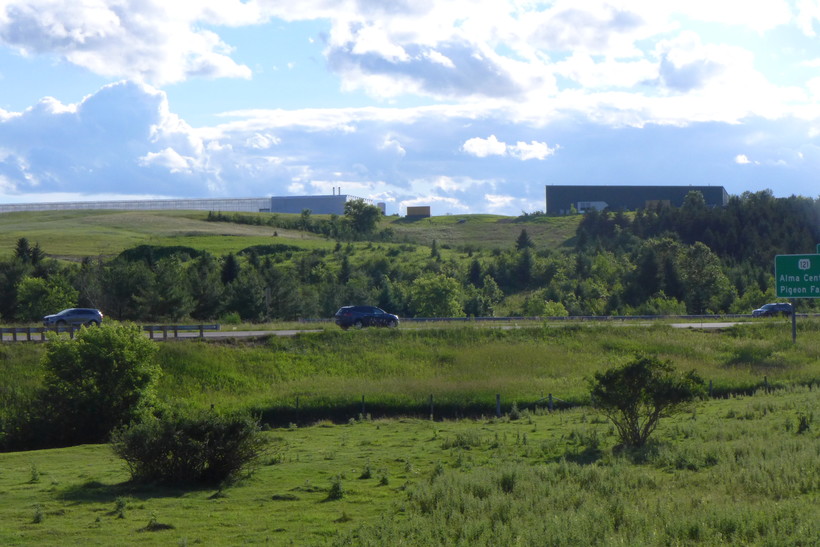 Superior Fresh, a high tech fish farm and aquaponics facility, overlooks I-94 in the unincorporated town of Northfield. The company claims it will be able to produce 160,000 pounds of Atlantic salmon and rainbow trout along with nearly 2 million pounds of leafy greens per year.

Fish farming in Wisconsin has traditionally centered around raising bait and sport fish for the state's anglers. But after a 10-year lull, the state's aquaculture industry is seeing growth and new farms are raising fish destined for the dinner plate.

There are 2,500 registered fish farms in Wisconsin, but fewer than 350 raise fish as a business. According to the United States Department of Agriculture, sales from Wisconsin fish farms declined between 2005 and 2013.

"For the past 10 years or so Wisconsin’s aquaculture industry has kind of been stagnant," Hartleb said. "It hasn’t really lost businesses, but it hasn’t gained any. I would say in the past three years there’s been this kind of resurgence in Wisconsin aquaculture, where not only are new businesses starting to open up but it’s younger generation people starting those businesses."

On a hill overlooking the unincorporated community of Northfield, just off Interstate-94 in Jackson County, a green metal building, two acres of Plexiglas and a red barn stand out in the surrounding sea of farm fields. This is the home of Superior Fresh, a multimillion dollar fish farm and aquaponic greenhouse capable of producing 160,000 pounds of Atlantic salmon and rainbow trout and up to 2 million pounds of varietal, leaf lettuce per year.

It’s hailed as the first privately owned, indoor, Atlantic salmon farm in America. Currently, there is a combination off around 60,000 salmon and rainbow trout in their early life stages.

Superior Fresh COO Brandon Gottsacker said they hope to ramp up to 75,000 by next year.

Nearly everything these young fish experience is computer controlled. Gottsacker and his team are able to use water temperature and lighting to fool the Atlantic salmon into believing they’ve gone through a winter, which triggers the fish to transition from fresh to saltwater and put on the majority of its weight.

"Inside our building we can grow these fish a little bit quicker than outdoor farms because we give the fish an optimum environment to live in their entire life," Gottsacker said. "So, we avoid winters and super cold water that would slow fishes metabolism down and ultimately their growth."

With this level of control, Gottsacker claims Superior Fresh will be able to grow their fish a year or two faster than in the wild or traditional salmon farms that use net pens in the ocean.

But with nearly 100,000 fish in an indoor facility one would expect fish waste to be a liability. For an aquaponics facility like Superior Fresh it’s part of their business model.

Brunno Cerozi is in charge of recirculating water between the fish house and the 123,000-square-foot greenhouse next door. Superior Fresh COO Brandon Gottsacker and production manager Brunno Cerozi in the greenhouse where they’re processing leaf lettuce, which gets its water and nutrients from the fish house next door. Photo courtesy of Superior Fresh

Standing next to a series of long, shallow pools with floating mats covered with heads of romaine, red leaf and butter lettuce, head grower Adam Shinners said he can grow greens nearly twice as fast as in the field and in a fraction of the acreage.

"I definitely believe that this is the future. The amount of space we utilize here is so much less than traditional agriculture, and we can keep this production going year-round, which is definitely something that’s going to be needed, especially in northern hemispheres," Shinners said.

In an effort to spur the growth of more fish farming and aquaponics facilities such as Superior Fresh, state Sen.Tom Tiffany, R-Hazelhurst, sponsored a bill easing regulations for the state’s aquaculture industry.

He said under the previous law fish farms weren’t treated as favorably as traditional agriculture.

"What we did was we wanted to streamline some of the regulatory functions, not change any environmental standards, but just streamline the process and really give greater opportunity for people in the aquaculture industry because there’s no reason we don’t have a more robust, growing aquaculture industry," Tiffany said.

Tiffany first introduced his aquaculture bill in 2016, but it got a cool reception and was opposed by a number of environmental groups. After being retooled the senator re-introduced the bill this year and it passed unanimously in the state Senate. But it was still opposed by groups including environmental law firm Midwest Environmental Advocates.

"There are concerns about the waste coming out of all those fish and adding to algae concerns, additional nutrients from any feed given to them," Geers said. "It also raises questions about when fish are brought in from elsewhere creating problems for invasive species and cutting off so much of the water supply from the stream that the native fish population might be threatened."

Whether Tiffany’s bill will spur an aquaculture revolution in Wisconsin remains to be seen, but for the team at Superior Fresh, there is excitement about the future.

If all goes well, Gottsacker said they would considering building a new operation 10 times the size of the facility in Northfield.