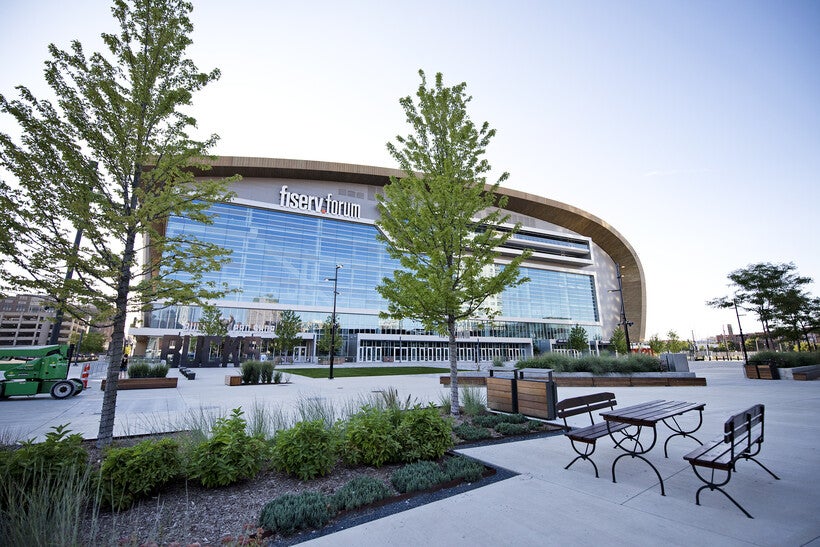 The Fiserv Forum was supposed to be the site of this year’s Democratic National Convention. Angela Major/WPR

The Milwaukee Election Commission announced Tuesday that Miller Park and the Fiserv Forum will not be used as in-person absentee voting sites for the Nov. 3 presidential election, as originally planned.

The city fears using the sites could be legally challenged due to a recent court ruling, and that ballots placed there could be at risk of not being counted, said Claire Woodall-Vogg, Milwaukee Election Commission executive director.

Miller Park and Fiserv Forum were announced in August.

"It was a very tough decision, but the last thing I would want is city of Milwaukee voters to use those sites and then later have their ballots thrown out due to our mistake or violation of a very unforgiving state statue," Woodall-Vogg said.

Rick Schlesinger, president of business operations for the Milwaukee Brewers, said he doesn’t want to get into the middle of recommendations analyzing election laws.

"Far be it from me to try to get in the middle of that thicket of complex laws and interpretations," Schlesinger said. "We are in agreement that in an abundance of caution and to avoid any risk that ballots may not be counted, regrettably we will not be a site for early voting. Obviously elections continue and if in the future there is an opportunity for Miller Park to be a site we are certainly open to that."

This is obviously disappointing BUT we don’t want the potential for any votes to be illegitimate. It’s become increasingly harder for people, especially, communities of color, to find safe and accessible places to vote and we were excited for FF to provide that space. https://t.co/ocKi103F48

Lt. Gov. Mandela Barnes was to the point:

They hate it when people vote. https://t.co/aSyanv5Ifp

The city added both locations in response to the COVID-19 pandemic and a desire to meet public demand for early voting by the safest means available. Milwaukee made national news during the April election when only five polling places were open in the city.

Woodall-Vogg said there will be more than 170 polling places open on Election Day with only seven location changes.

Woodall-Vogg said the city still offering 13 in-person absentee "early" voting locations that are geographically spread out across the city. The city had three sites in Nov. 2016 and eight sites in Nov. 2018.

"We are doing everything within our ability to make sure every person in this city has a fair chance to cast a ballot and regret we are not able to pursue the unique opportunity of integrating these two well-known locations," Barrett said.