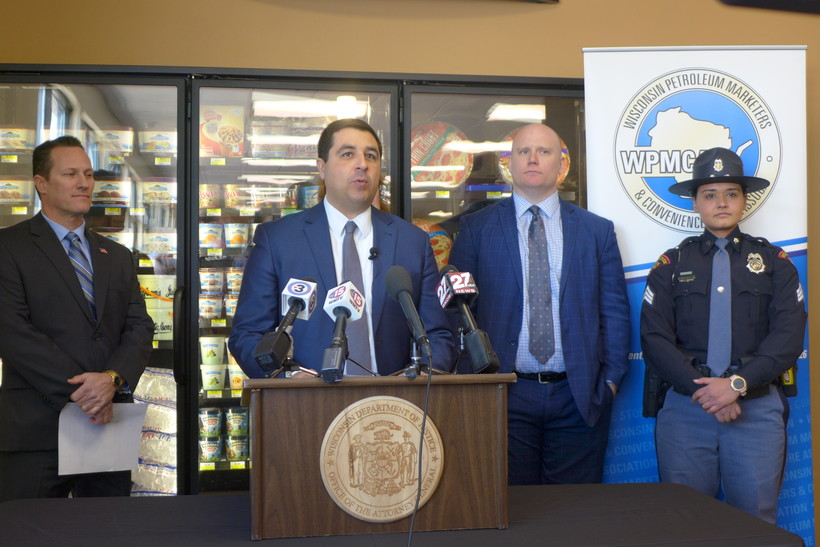 Wisconsin Attorney General Josh Kaul announces an effort to alert more convenience store employees to suspected human trafficking they may see during a press conference Jan. 21, 2020 at a Stop-N-Go gas station on 1100 N. Windsor Ave., Cottage Grove, Wisc. It is similar to a partnership the Wisconsin Department of Justice has with hotels and motels in the state in an effort to curb a nationwide problem where people are forced into the sex trade. Shamane Mills/WPR

Wisconsin Attorney General Josh Kaul is creating new partnerships to increase awareness about a crime that can be hard to spot because it takes place in the shadows of society.

Even when human trafficking is out in the open it can be hard to detect. That’s why Kaul, along with the Wisconsin Department of Children and Families, announced Tuesday that Gov. Tony Evers' administration is working with convenience stores to increase the understanding of human trafficking.

"It’s a good thing people are becoming aware of this horrible crime so that we can keep fighting it more effectively," Kaul said during an appearance at a Stop-N-Go store in Cottage Grove.

The state justice department released a report earlier this month which assessed sex trafficking in Wisconsin.

Some of the findings were that the crime is underreported and that there was sometimes confusion regarding the difference between prostitution and human trafficking. Officials at the press conference urged those who suspect trafficking to report it and noted it can be difficult for victims to come forward on their own.

"Victims are often reluctant to seek help due to threat of force by the trafficker. Illegal drugs are often involved and used as additional leverage against victims," said State Patrol Sgt. Harman Chahal.

The average age someone is targeted for trafficking is 12 years old, and oftentimes that occurs online, Kaul said.

The Wisconsin Department of Children and Families has been working with the DOJ to provide training resources to workers in the hospitality industry, specifically the Wisconsin Hotel and Lodging Association. The partnership with the Wisconsin Petroleum Marketers and Convenience Store Association is the most recent private sector partnership in the effort to fight human trafficking.

"We know by partnering with the business community we can leverage additional help," Amundson said.

The DOJ report on trafficking noted it’s a problem that is receiving more recognition nationally and locally because of its impact on individuals, families and communities. The prevalence of sex trafficking in Wisconsin is difficult to estimate, the report states, since it is often underreported and there are misunderstandings about both the signs and definitions of human trafficking.