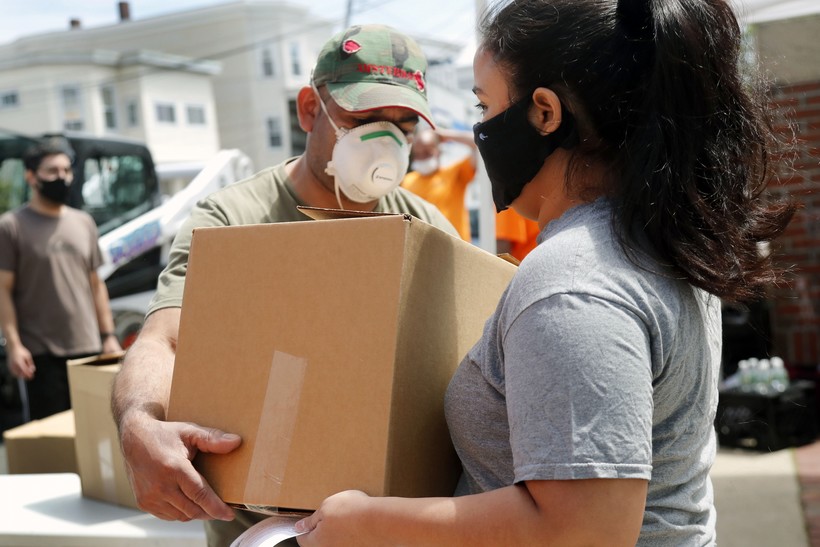 A woman receives a box of food Tuesday, June 2, 2020, at a pop-up pantry in Chelsea, Mass. Elise Amendola/AP Photo

Democratic members of Wisconsin's congressional delegation are asking the head of the U.S. Department of Agriculture why state businesses didn't receive more contracts for a new program buying excess food during the COVID-19 pandemic.

Funded by federal coronavirus response money, the program contracts suppliers to purchase, package and distribute family-sized boxes of food to local food banks and other organizations serving those in need. It includes money for fresh produce, meat and dairy products.

The USDA announced in May that it had approved $1.2 billion in contracts for the program.

Kind said the department hasn't been transparent about how the contracts were awarded.

"Only 1 percent of the money went to Wisconsin entities. And that doesn't make sense given the established relationship we've had with USDA, many of the programs that have been familiar with us in the past," he said.

As an example, Kind said the food box program denied an application from the Hunger Task Force in Milwaukee because of a "minor technical difficulty" and didn't allow the organization to fix the mistake.

The Hunger Task Force didn't respond to requests for comment.

Kind and the other lawmakers also asked Perdue to release more specific details on the companies that did receive contracts, a practice Kind said is standard for government programs.

The USDA does provide lists of approved contractors on its website with each company's city and phone number.

Eight companies are listed as being based in Wisconsin, with contracts totaling $7,567,303. Four of the companies received contracts for fresh produce boxes and two companies were contracted to provide a combination of food items.

The USDA awarded two contracts to Wisconsin producers for fluid milk distribution in the Midwest, totaling $208,150.

During a call with reporters Thursday, Wisconsin Department of Agriculture, Trade and Consumer Protection Secretary Randy Romanski said he has also been concerned about the lack of information about how the contracts were awarded.

"Considering Wisconsin's stature as a state with tremendous diversity in agriculture production, the diversity of commodities that we produce, the volume of milk and cheese, we're a top 10 producer in a whole variety of commodities, I would have expected Wisconsin producers to be more represented in the program," Romanski said.

Romanski said he will be talking with a USDA administrator next week to learn more about how the contracts were awarded and what producers can do to be eligible for the remaining $1.8 million in contracts.

But some agriculture economists in the state say there could be reason why more Wisconsin dairy suppliers didn't qualify.

He said many Wisconsin plants cater more to food service and institutional buyers.

"Plants creating food boxes for giving away to consumers would need to be focusing on consumer-size packages and not 20-pound bags of shredded mozzarella. I mean, that's not the kind of thing that they would have been wanting to include in boxes," Stephenson said.

He said the USDA will likely pay more attention to the distribution of funds in the next round of contracts given the number of complaints about the program so far.

But no matter who gets the contracts, Stephenson said all dairy producers have felt the positive impacts of the program.

"The big government purchases that we have are one of the major reasons that we've had such a tremendous lift in market sentiment here over the last few weeks. It has been really quite unreal," Stephenson said. "So in that regard, it didn't really matter who's filling those cheese boxes. Dairy producers in Wisconsin are getting the benefit of that rise in prices."