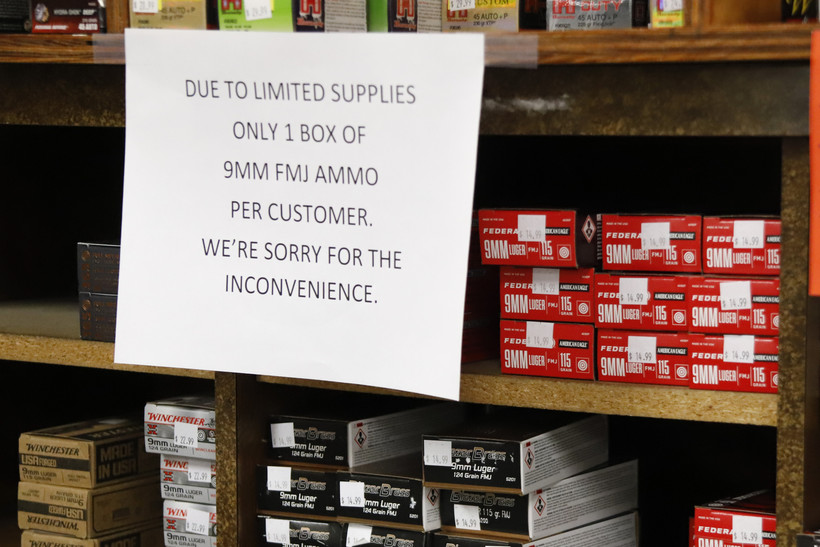 The spike in demand for guns and ammunition driven by the COVID-19 pandemic has not subsided in Wisconsin. Gun dealers around the state say they are still having trouble keeping shelves stocked 10 months after the first cases of coronavirus were reported here.

In late March, Pat Kukull of Superior Shooters Supply in the city of Superior told WPR she estimated her gun sales had spiked by as much as 500 percent. In an interview in December, she said the situation has been stressful with demand being "absolutely solid" every day.

Kukull said she prefers when customers looking for firearms have multiple options and her staff can spend more time to educate new buyers.

She said panic buying has forced her to ration bullets to one box per person, and she's even had trouble getting pepper spray, mace and air rifles.

COVID-19 has been the main driver of panic buying, said Kukull, but protests and riots have contributed.

"And then, like everything else, once somebody knows that they can't go into a store and buy 2,000 rounds of ... ammo like they used to, now it's starting to feed on itself," Kukull said.

Troy Dormady has worked at Moe Hardware Hank and Sporting Goods in River Falls for more than 20 years and has never seen demand like this. He said the rush for ammunition started with calibers for handguns like .380 and 9mm. Then Dormady said it spilled over into everything else, even common rifle rounds used for deer hunting.

Dormady and Kukull said ammo production was also impacted by COVID-19. In July, Remington Arms Co. filed for bankruptcy protections in federal court. Dormady said he got a letter from another ammunition manufacturer that it was in talks to purchase the rights to the Remington brand.

"Hopefully by next deer hunting season we should have most of your deer calibers, provided the virus starts to go away and we don't get any more massive riots," said Dormady.

In Racine, Mike Arts is a manager at Shooters Sport Center. He said he's been able to get a few more guns than he was two months ago, but demand is still high for most calibers.

Arts said his staff members are asked all the time why ammunition is so scarce and when things will improve.

He said the firearms industry has been through runs on ammunition and guns before and there's no telling when things will get back to normal.

"It doesn't matter whether you're talking refrigerators or 9mm," said Arts. "You know, when everybody bought everything that there was, it just takes a while for it to come back."