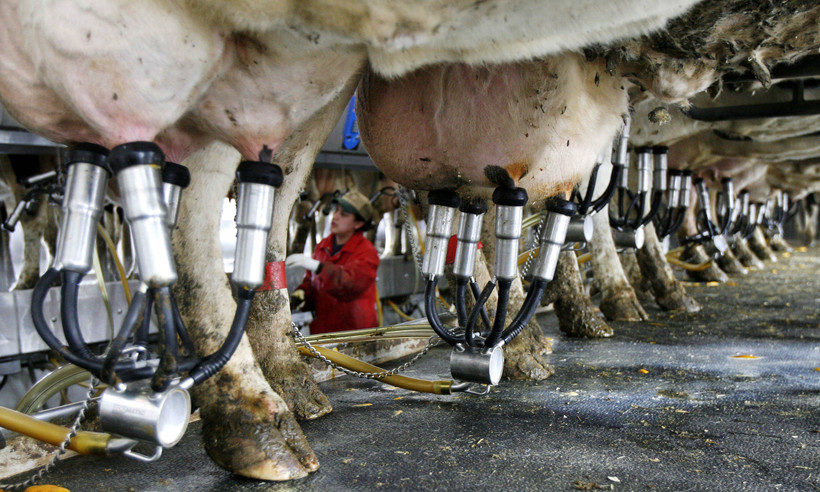 In this March 5, 2009 photo, an Hispanic worker watches the milking operation at a farm in Fairfield, Vt. Toby Talbot/AP Photo

In a press conference Thursday, leaders said the Farm Workforce Modernization Act, a bill already passed by the U.S. House and pending in the Senate, would fix labor shortages by letting them hire H-2A visa workers.

The H-2A program allows employers to bring in immigrants for temporary or seasonal agricultural jobs. As of now, the dairy industry is excluded from the program.

That fuels labor shortages because there aren't enough U.S. citizens to staff the nation's dairy farms, said Brody Stapel, the board president of Edge Dairy Farmer Cooperative and a Wisconsin dairy farmer.

"There are not either enough local workers or enough willing workers to fill these labor-heavy jobs. Farmers have tried everything, and these are typically living wage jobs," Stapel said. "Wisconsin alone has a lot to lose if we don't solve this serious problem."

There are over 6,000 dairy farms in the state, he said. According to a University of Wisconsin-Madison study, dairy generates nearly half of Wisconsin's agricultural revenue each year. Over 150,000 people work in the industry, making up 4.2 percent of the state's total workforce.

With Wisconsin's working population dropping, Stapel said the labor shortage is on track to get worse. Because of that, he said the Senate needs to change immigration policies.

"The severity of the issue cannot be overstated," Stapel said. "Congress needs to act to provide farms with meaningful access to a visa program for year-round workers ... If the past few years have taught us anything, it's that we have taken our safe, dependable food supply for granted. And we can no longer afford to do this."

Food prices have surged 11.4 percent over the last year, according to the U.S. Bureau of Labor Statistics. Americans are feeling that in their grocery bills, said Steve Obert, executive director, Indiana Dairy Producers.

"If we want to fix this, we have to fix the agricultural labor shortage. Immigrant workers make up nearly 75 percent of the agriculture workforce (nationwide)" he said. "That high percentage is not because they are lower-cost employees. It is because they are willing to do the work of feeding, milking and caring for our dairy cows."

Though immigrants make up 5 percent of Wisconsin's population, they take on 10.5 percent of jobs in the dairy product manufacturing industry, according to the immigration research organization New American Economy.

"If the Senate and Congress don't fix this, dairy farms in Indiana, in Wisconsin and all across the country will shut down their operations, and we'll all be worse off for it," he said.

Because of the current system, many farms are struggling to get work done consistently and on-time, said Walt More, the president of American Dairy Coalition and a Pennsylvania dairy farmer. It's also made it harder for farms to expand, he said, and that has far-reaching consequences.

According to the U.S. Department of Agriculture, the country is expected to import more agricultural products than it exports next year for the first time ever.

"Time is of the essence to ensure this can be solved by moving forward to fix the (agriculture) labor shortages before the end of this year," he added. "It is vital to move forward immediately and assure a reliable labor force for now and in the future."