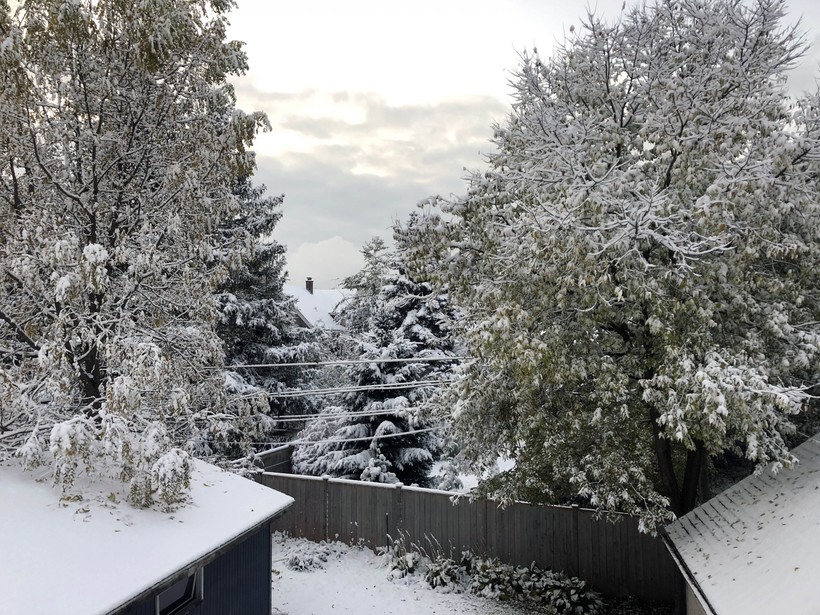 By the morning of Tuesday, Oct. 29, 2019, about 3 inches of snow fell near Madison, Wisc., according to the National Weather Service. Neenah had about 4 inches of snow early Tuesday with about 3 1/2 inches in Green Bay. It was the first snow fall for many Wisconsin residents across the state. Snow can be seen here on the east side of Madison that morning. Rachael Vasquez/WPR

Some Wisconsinites received their first taste of wintry weather on Tuesday with a fresh blanket of snow on the ground. Wisconsin could see more of the same this winter as NOAA’s Climate Prediction Center is forecasting wetter-than-average weather from December through February.

Wetter-than average weather is most likely across the Northern Plains, Upper Mississippi Valley and the Great Lakes. Climatologist Bryan Peake with the Midwestern Regional Climate Center said the chance for rain or snow is at least 40 percent above normal.

"If we go into the winter kind of in a similar condition where we are now, and then we do have a wetter than normal winter, it certainly could lead to some more spring or maybe even late winter flooding from snowpack melt and just general rainfall," said Peake.

The Upper Midwest is also likely to see equal chances for above or below normal temperatures. Peake said that’s likely to create a situation where people may not know what to expect from week to week.

No strong influence from El Niño or La Niña is expected this winter. However, the Arctic Oscillation, or the atmospheric circulation of air over the Arctic, could influence cold conditions that set the stage for some record-setting snowfalls across the Midwest and Wisconsin last year.

"We could have a lot of extremes in some cases, especially in the cold direction but also possibly in the warm direction," he said.

According to Peake, northern Wisconsin saw about 80 to 100 inches of snowfall last year and the southern portion of Wisconsin saw between 40 to 60 inches for the year.

A final winter outlook is expected in mid-November.

For many, what felt like winter began Tuesday morning, with Neenah getting about 4 inches of snow, Green Bay getting 3 1/2 inches and Madison getting 3 inches, according to the National Weather Service.

As for later in the week, forecasters have their eyes on a developing weather system moving in for Halloween when another round of snow is expected.

Snow has all but ended this AM, but more wintry weather is ahead. A light mix is possible tonight (little to no accum), which will transition to rain on Wed. That will change back to snow Wed night, continuing Thurs. *LOTS* of uncertainty re: amounts, so stay tuned for updates! pic.twitter.com/85dlL90TBe