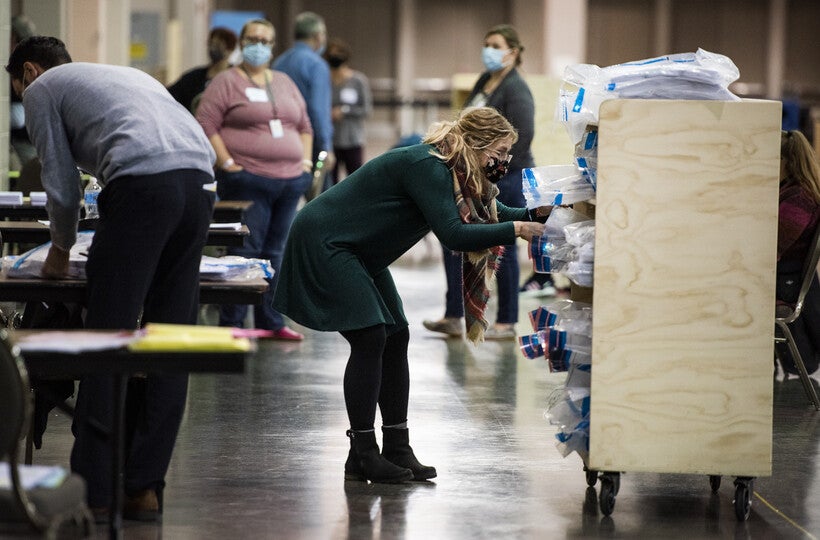 On Tuesday, Milwaukee officials discovered 386 previously unopened and uncounted ballots during the recount. Claire Woodall-Vogg, executive director of the Milwaukee Election Commission, said at the time simple human error led to the ballots being previously overlooked.

Biden went into the recount with a margin of victory of about 20,600 votes statewide.

The recount must be completed by Tuesday, Dec. 1, when the Wisconsin Elections Commission is scheduled to meet to certify the state’s election results.

The re-tallying in Wisconsin’s two Democratic strongholds began last week. As it has progressed, the president’s campaign has objected to large categories of ballots, attempting to have them disqualified from the recount. Those efforts have so far been unsuccessful, with the three-member boards of canvassers in both Dane and Milwaukee counties voting to reject their arguments. Each of the boards of canvassers is made up of two Democrats and one Republican. Some of their decisions on whether to throw out ballots have been unanimous; others have split along party lines.

The Trump campaign’s objections during the recount could be fodder for a lawsuit after the re-tallying is complete. On Tuesday, a lawsuit was filed before the state Supreme Court seeking to throw out Wisconsin's presidential election results. That lawsuit is unrelated to the recount.

The Trump campaign requested the partial presidential recount in Dane and Milwaukee counties last week, citing "illegally issued" and "illegally altered" absentee ballots across the state, but arguing those things happened at particularly high levels in the state’s Democratic strongholds.