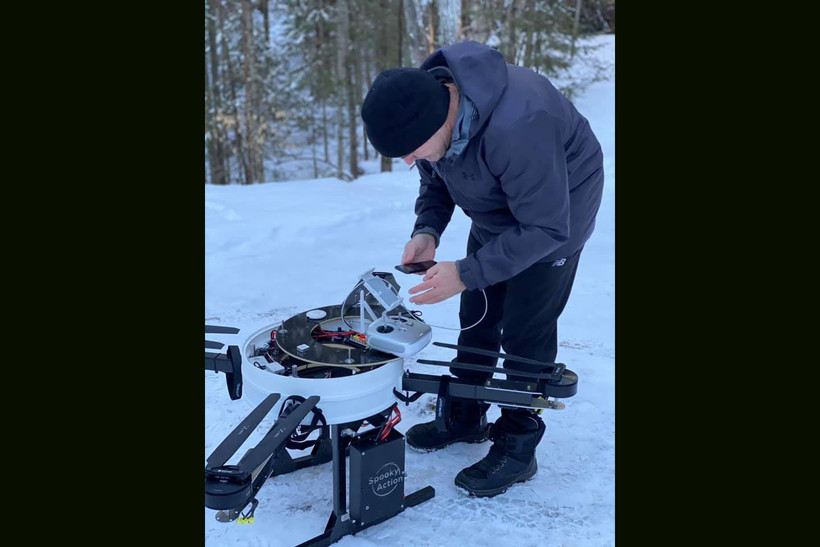 Scott "LB" Williams works on a drone. Wisconsin Telelift is partnering with Northland Pines School District to provide internet access to rural students via a network of drones. Photo courtesy of Wisconsin Telelift

Rural Northwoods students who lack reliable internet at home will soon be able to connect to their school networks via a drone-powered cellular signal.

A Wisconsin startup will be part of a state-funded pilot program in the Eagle River area that will test the use of drones as a way to expand internet connectivity into rural areas.

It's a partnership between the new company Wisconsin Telelift and the Northland Pines School District. The drones will be fitted with cellphone towers, allowing students throughout the sprawling Northwoods district to get online, even in rural areas where cellphone service and broadband access are unavailable or unreliable.

It's a real need in a district that is among the state's largest geographically, spreading over 435 square miles in Vilas and Oneida counties.

As many as 15 percent of the district's 1,340 students have no internet access at home, said Northland Pines administrator Scott Foster, and half of its students have unreliable connections that don't always allow for streaming video and other tools used in educational software. The district provides Chromebooks to its students and portable hotspots to those who need them — but the hotspots can only work where there is a strong cellular signal. In much of the district, that's just not the case.

"Not only is it an issue that some students can't afford to buy broadband at their house," said Scott "LB" Williams, founder of Wisconsin Telelift. "It's actually not available for a lot of people."

The notion of boosting signals via drone is new, and it's based on new technology that makes it possible for the drones to remain in the air for days and weeks at a time. The key, Williams said, is that such long flight times require a huge amount of energy, more than what any battery power could accommodate. The solution: These drones are "tethered" to the ground with a power cord, which plugs into a generator. With that power source, the drones can hover at 100 feet or higher for more than a month in all but the very worst weather.

"We now have this aircraft that has 160 pounds of lifting thrust, and we can fly it for 42 days," Williams said. "It's so advanced that people still believe it can't be done, even though we're doing it." 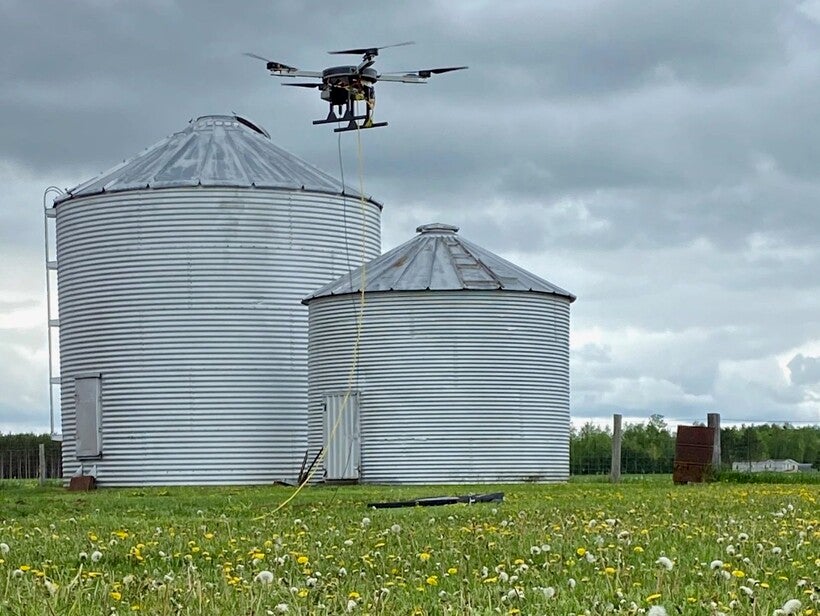 The "tethered" drones are attached by a wire to a power source on the ground. They’ll fly about 100 feet in the air. Photo courtesy of Wisconsin Telelift

Internet access is one of the most persistent challenges to Northwoods and rural Wisconsin.

A report from the Office of Rural Prosperity issued in December highlighted rural connectivity as a top priority for rural economic development. Business groups and policy analysts have found the same thing. And even as Wisconsin has made advances, the cost of creating broadband infrastructure remains an obstacle in sparsely populated regions. That makes the possibility of a more mobile, less costly way of addressing connectivity something that could attract the attention of local policymakers.

For now, the pilot project with Northland Pines has relatively modest aims. Foster said the drones will likely go up in the evenings to ensure the school's VPN networks are available to students. They can go up in the event of a snow day to help make virtual learning possible. And Foster and Williams said they'll use the pilot project to learn more about how to make the tool effective — to test its range in the wooded areas of the Northwoods, and to find ways to make the service effective. They'll start testing this month.

"This isn't the Holy Grail of solutions that, boom, just solves it and now rural people will have internet," Foster said. "But I do think it has a spot, and maybe it will point us in a direction of a better long-term solution for these really hard to meet areas."

From Foster's perspective, the project will also serve as a type of project-based learning for students in the district — a chance to witness the intersection of science, technology and entrepreneurship. He expects challenges in the process, but also a chance to address one of the district's persistent problems.

And for Williams, it's a way of proving Wisconsin Telelift's technology works and has practical application.

Williams is an Air Force veteran — his nickname, LB, is an old military call sign — who spent years abroad, including an assignment in South Africa. When he left the service, he and his wife, Greta, started a nonprofit there that focused on conservation research. It was through that work that they learned about the use of drones to help address poaching, human trafficking and other crimes.

Their nonprofit work also connected them with Rahul Tiwari, a young, technically gifted engineering student whose innovations led him to found the Minnesota-based startup Spooky Action robotics, with which Wisconsin Telelift partners.

The Williamses moved back to northern Wisconsin with their kids in 2018 to be near Greta's family.

"I never would have believed we would still have the challenges that we have here," Scott said. "To think that technologies that started development in a remote game reserve in Africa have application in the U.S. is fascinating, but it's true."

Just last week, Scott left a job in order to focus full-time on trying to build Wisconsin Telelift. The company employs a handful of part-time workers, and the Williamses' 16-year-old son is an intern. They expect the company to grow, and even hope to tap Wisconsin manufacturing firms for the production of their drones.

The pilot project with Northland Pines is funded by a $100,000 grant from the Wisconsin Economic Development Corp. and the Public Service Commission.

In the long run, Scott sees many potential applications for the service. The drones could be an emergency response tool in the wake of emergencies or natural disasters that knock out traditional cellular service. Another use would be to boost networks during high-traffic times, as when, for example, large groups of fans at Lambeau Field crash cellphone networks because they’re all using phone and data signals at the same time. As people increasingly rely on these networks, having a way to increase or back up their capacity will be important, he said, in both urban and rural areas. And he's hoping drone-powered networks will catch on.

"I think every county in the U.S. should have one," he said.