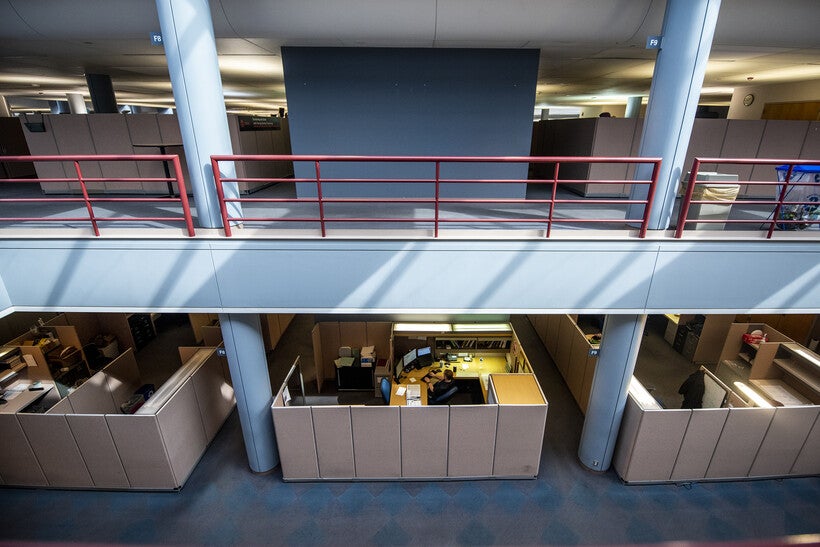 While workers are slowly returning to the office after the pandemic forced many to work from home, companies are rethinking how they invest in their workspaces.

Since the COVID-19 pandemic, many of the jobs that were traditionally done in a physical office space have been done remotely. And while there are no longer pandemic restrictions limiting the ability to gather at work, many people have continued to work from home.

"We don't believe that's going anywhere," said S.R. Mills, chief executive officer of Bear Real Estate Group, a Kenosha-based developer that owns and manages real estate in Wisconsin and 13 other states. "We think that will continue — (though) certainly not to the same degree as it was during the pandemic."

The shift toward remote work has changed commercial development.

In downtown Madison for example, only two of the over 70 current, recently completed and planned development projects were offices, according to the Downtown Madison Development Tracker website. Meanwhile, in the Milwaukee area, 73 out of 93 office leases from January through March 2022 were in the suburbs instead of the downtown area, according to Milwaukee Business Journal.

"There are so many spots where we're having to rethink, 'OK, what's that building gonna be?' Maybe it doesn't remain this office. Maybe it has to get converted into something else," Mills said. "We do see that the marketplace is shifting."

But Matt Dorner, economic development director for Milwaukee Downtown Business Improvement District 21, said the number of people returning to the office in downtown Milwaukee has increased over the last year.

He said recent announcements from companies like Milwaukee Tool and Fiserv Inc. — both of which plan to bring offices to the city — will cause that trend to continue. Those projects, Dorner said, will combine to occupy over 500,000-square-feet of formerly vacant space.

"We have really great momentum, and we're also seeing just the general uptick in foot traffic (from) people returning to the office," he said. "And I think we're going to continue to see that through 2023."

He said a September survey of downtown employers found that about 60 percent of employees were going to the office on an average workday.

"When we compared those numbers against some national data that was out there, (we found) that downtown Milwaukee was actually faring really strong in terms of returning to the office versus some of our peer cities," he said.

At the same time, Milwaukee is working to attract and retain remote workers and companies that employ them by working on quality of life improvements.

"We need greater investment in things that make Milwaukee a destination for workers that can choose to live anywhere," City Development Commissioner Lafayette Crump said in a statement. "By doing so, we will not only help attract remote workers, but these improvements will also create a positive value proposition that will attract all workers and benefit existing residents."

While the number of employees returning to the office is gradually increasing, the needs of workers and companies have shifted.

"The size of the office is shrinking, but they really want to ensure that there's great amenities, primarily to retain, attract existing employees and future employees," Mills said.

A few of the design elements companies are now integrating include developing collaborative spaces, incorporating new technologies and creating inviting outdoor spaces, according to Jonathan Webb, director of workplace strategy for KI, a Green Bay-based manufacturer of office furniture.

"The way that we have adapted to working everywhere has had a profound impact on the office and the design of office spaces," Webb said. "It's really been an interesting thing to watch companies that we work with figure out what the office space means now because it’s a lot different from it was before 2020."

He said employers are allowing workers to choose where they want to work, whether in the physical office or from home.

That means companies must ensure spaces used for group meetings are adaptable to ensuring everyone in a meeting, both physically and virtually, can easily see and talk to each other, Webb said.

"When we talk about flexibility and collaboration, what we are really trying to do is maximize engagement among employees so that when they do come to the office, they really feel like there's a really strong sense of purpose to what they're doing," he said.

At the same time, Web said the new generation of office workers is hungry for social interaction, after the pandemic forced many to finish their academic careers remotely.

"Having a workplace that cultivates and allows people to build relationships within the workplace, I think is really, really important," he said. "It's actually something that that younger generation really wants."

He added that outdoor spaces have become a vital tool for companies trying to bring workers back to the office, as well as for promoting employee health and wellness.

"It's a big source of employee satisfaction when they can take a break outdoors or have a meeting outdoors," he said. "It's something a lot of employers haven't considered in the past."

Companies are also investing in spaces that help foster a sense of community among coworkers, Mills said.

"It doesn't have to necessarily just be for one company. I think you can have multiple offices sharing those spaces," he said. "They can be really, really dynamic. You can spend some money to make them great, and they can self-sustain from coffee shops or a little bar area that can serve cocktails and food."

'Edging into more flexibility': Wisconsin workers, employers rethink the future of the office after 2 years of pandemic disruptions

A national survey shows an increasing percentage of employees who are able to work from home want to do so. And some Wisconsin employers are committing to this new way of working.