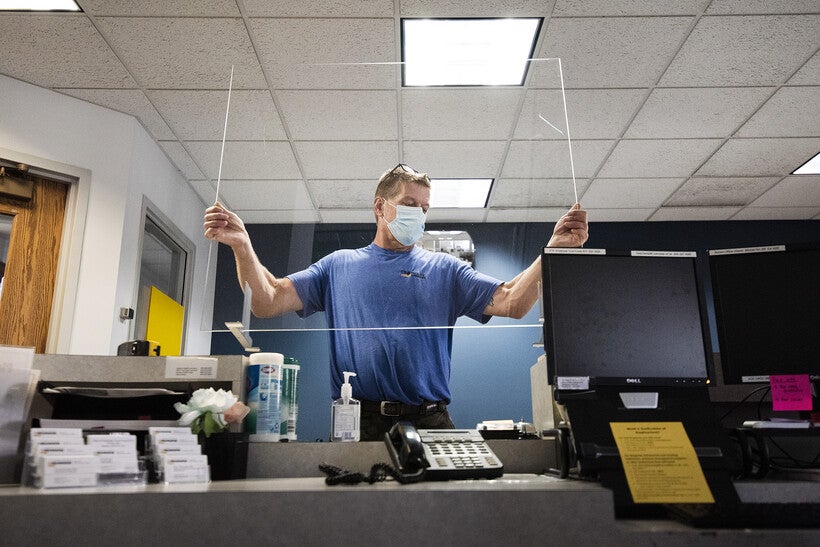 Eric Kozak places a piece of plexiglass on a desk Friday, Jul 31, 2020, at the human resources offices at UW-Milwaukee. About 600 pieces of plexiglass will be placed around the campus, Kozak said. Angela Major/WPR

Over the next month, hundreds of thousands of Wisconsin college students will return to campus as the state continues to grapple with the COVID-19 pandemic. There will be masks, social distancing and even smartphone apps aimed at limiting new outbreaks.

But while there are students eager to regain some form of in-person learning, a number of instructors and staff are concerned about their safety.

In March, a cascade of public and private colleges in the state moved classes online and told students to stay home, if possible, due to a small but growing number of positive COVID-19 test results. The transition happened within a matter of weeks, and the effects shook higher education in a way never seen before.

Public and private universities issued tens of millions of dollars worth in housing and dining refunds to students who were no longer on campus. Sporting events and summer camps were canceled. For the University of Wisconsin System alone, there was an estimated $212 million in lost revenues.

There were less than 50 confirmed cases of COVID-19 in Wisconsin when campuses first began to shut down in the spring. As of Tuesday, there have been 56,056 cases, with a weekly average of 840 new cases per day, according to the Wisconsin Department of Health Services.

Given the high levels of COVID-19 activity, some aspects of college life remain on hiatus. On July 27, the Wisconsin Intercollegiate Athletic Conference announced the cancellation of football, women's soccer, women's volleyball and all cross-country seasons due to the growing number of COVID-19 positives.

Still, campuses like the University of Wisconsin-Eau Claire are pushing ahead to reopen this fall, with administrators stressing that they’re doing everything they can to keep students and employees from contracting COVID-19. That includes holding hybrid classes, with half of the enrolled students attending in-person some days and the other half following along online.

UW-Eau Claire, like other universities, announced mandatory face masks prior to Gov. Tony Evers' statewide mask mandate. The campus will also require students to both record their daily temperature using a smartphone app developed in collaboration with the Mayo Clinic, and to seek testing if they develop symptoms, though Chancellor Jim Schmidt says the campus is "having problems getting supplies" for new testing equipment. 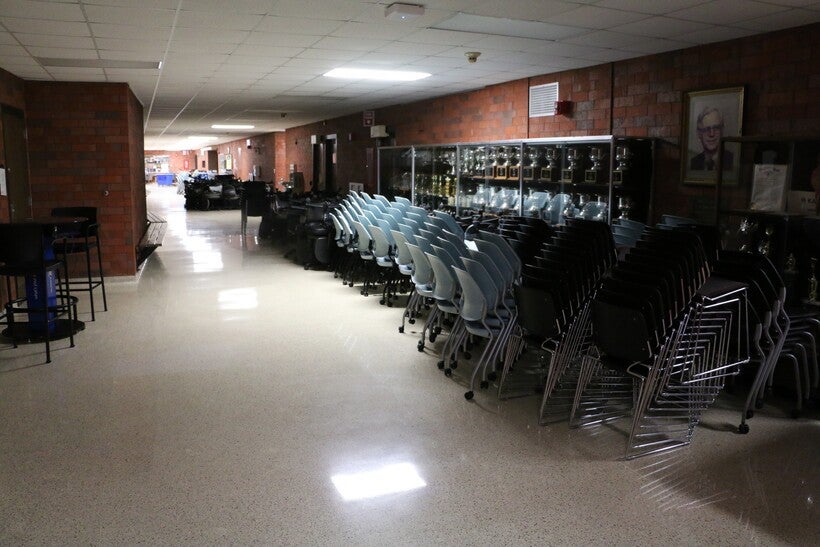 For Students, Mixed Feelings On Returning To School

Currently, a small "move crew" of student employees at UW-Eau Claire are removing thousands of chairs from classrooms and meeting spaces to accommodate the 6-foot social distancing recommendation put out by the U.S. Centers for Disease Control. Elenor Sladek, a senior at UW-Eau Claire, is spending six to eight hours per day moving furniture and setting up hundreds of hand sanitizing kiosks across campus ahead of the return of around 11,000 students.

"Obviously, we can do everything that we can on campus to monitor what's going on," said Sladek. "But the university really has no idea what's going on off campus. Definitely Water Street and the bar scene. That's something that would be concerning for me."

In June, the Eau Claire City/County Health Department warned residents about potential COVID-19 exposures at three bars popular with college students. According to the Wisconsin Department of Health Services, nearly 40 percent of all positive cases in Eau Claire County came from people in their 20s.

UW-Eau Claire sophomore Emily Sweatt is worried enough about returning to campus that she requested to be released from her fall housing contract. She said her request was initially rejected, but she has appealed the decision and is awaiting a reply.

"My plan initially was to return in the fall and live in the dorm," said Sweatt. "But now with the cases spiking again and people not seeming to take things as seriously as I feel they should, I don't know that I necessarily feel comfortable living dorm-style in a bigger city." 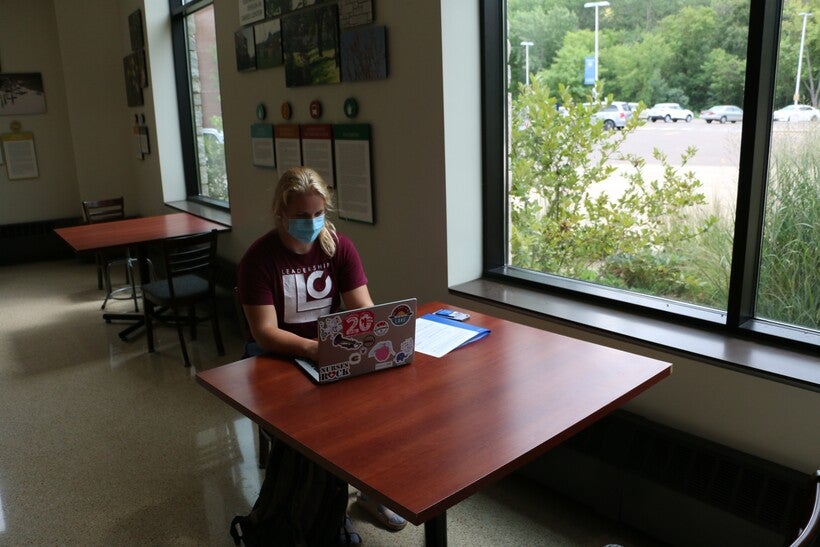 Nursing Major Elanor Sladek works on a research project in the Davies Student Center at UW-Eau Claire. She said campus administration is doing everything it can to prevent outbreaks of COVID-19 but she's concerned about students not taking precautions seriously off campus. Rich Kremer/WPR

But other students are demanding in-person classes this fall. UW-Eau Claire junior Joseph Tirado said the sudden switch to online classes was "pretty bad." As a chemistry major, he said the worst part was trying to do lab work virtually.

"Once we went online, we were just given the data and we didn't get any laboratory experience, which is really important for me, for internships and my future career," said Tirado. "And I completely missed out on that. I was really upset about that. And I really hope I don't do that again this year."

While Tirado said he was recently quarantined after two of his roommates tested positive for COVID-19 without showing symptoms, he also said if UW-Eau Claire had announced it would only hold online classes this fall, he wouldn’t have enrolled.

Administrators across higher education in Wisconsin have said student demand is the main reason they're holding at least some in-person classes this fall. 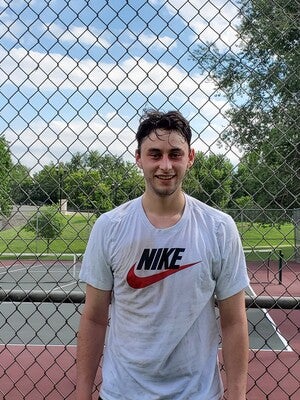 Joseph Tirado is a UW-Eau Claire junior majoring in chemistry. He said he wants to return to in-person classes this fall because his spring semester chemistry labs "were a joke." He said he needs in-person lab experience for internships and a future career. Tirado said if UW-Eau Claire had announced over the summer that fall classes would be online he wouldn't have enrolled. Rich Kremer/WPR

A breakdown of UW System universities shows variations in the number of face-to-face classes offered. UW-Oshkosh reports that 60 percent of its classes will be in-person, while UW-La Crosse is expected to hold only 14 percent of classes face-to-face.

UW-Madison also plans to test residents in university housing bi-weekly for the virus. That testing plan is the most comprehensive among UW campuses, with others like UW-Eau Claire, UW-Milwaukee and UW-Stevens Point only testing students who develop symptoms. UW-Madison is also the only state-owned campus that has announced it will offer COVID-19 testing to employees.

The "Smart Start" announcement came as Dane County was experiencing a spike in COVID-19 cases, predominantly among young people. The county recently reported that from July 11 through July 24, people age 18 to 25 accounted for 31 percent of all cases.

Some Question Role Of Finances In Decision To Reopen

While some students are eager to return to campuses amid the pandemic, some instructors and staff are not. A survey of around 400 UW-Madison employees conducted in late June and early July by the campus’s United Faculty and Academic Staff union found that 86 percent of respondents reported feeling uncomfortable or extremely uncomfortable about coming back to campus.

Kate Diamond is an outreach specialist at UW-Madison and member of the UFAS union. She said the survey results turned up some surprises. For example, she said more than half of respondents said they take the city bus to work.

"We know right now that what happens on campus is going to happen to the Madison community," said Diamond. "And being able to now understand that over half of our respondents rely on taking public transportation to work, we know that’s absolutely true."

Diamond said the survey didn’t ask respondents whether they think the university is pushing its reopening plan because of financial concerns, but she said she believes that’s the case.

"I think all the signals that we get from administration is that this is a financially driven decision and not a decision driven by health and safety needs at all," Diamond said.

On July 28, Chancellor Blank wrote in a blog post that was not the case.

"While I want to make clear that fiscal considerations are not the primary force in our decision to offer a hybrid model of classes this fall, it is true that our budget next year is also greatly affected by the return of students," said Blank.

College budgets were severely impacted by the campus shutdowns that happened in March. A May estimate by the University of Wisconsin System projected the state’s 26 universities and branch campuses would lose more than $212 million through the summer. Chancellor Blank has pegged UW-Madison losses at around $150 million, though she warns the actual number could be much higher.

UW-Madison Associate Professor of Gender and Women Studies Sami Schalk said the surge of new cases and having a partner who is at higher risk of developing severe symptoms means it isn't worth it for her to hold in-person classes this fall.

"It just seems so clear to me that at some point we are going to have enough of a spike that we are not going to be able to have face-to-face classes," said Schalk. "And I would rather just already be planning for mine personally."

A new study conducted by researchers from the Yale School of Public Health, Harvard Medical School and Massachusetts General Hospital used computer simulations to suggest that COVID-19 infections can be controlled on campuses if students follow strict behavioral guidelines and are tested every two days.

Schalk said she believes administrators at UW-Madison are doing everything they can to minimize the risk of outbreaks on campus this fall, but the university cannot control people’s individual behaviors. 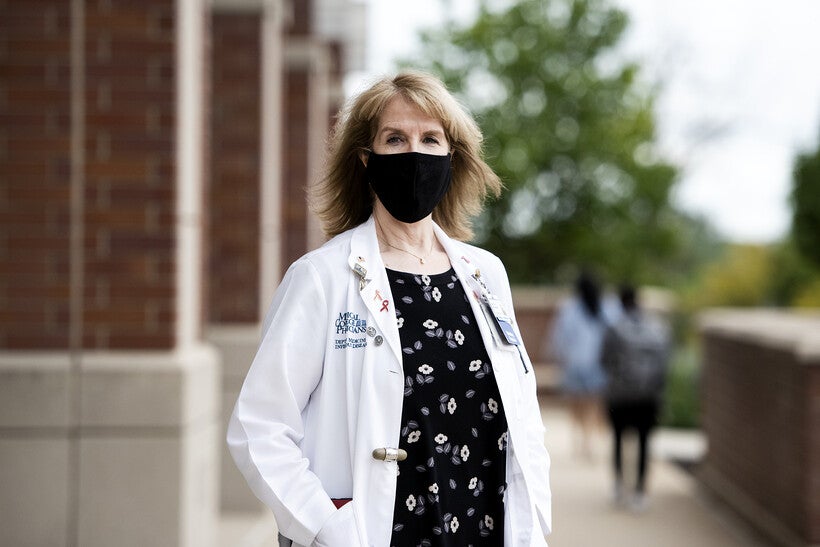 Froedtert Hospital Director of Infection Prevention and Control Dr. Mary Beth Graham agrees that what happens off campus will have a big impact on the success of college reopening plans. She said campus recommendations that students avoid gatherings is akin to putting "muzzles on kids" and limiting the freedom of living away from home.

"The best-laid plans of the institution are only as good as your students following the recommendations," said Graham. "That’s the potential weak link."

The option to work from home is not universal for all college employees. Stan Yasaitis, UW-Milwaukee university services assistant and chair of the university staff senate, said he’s been working on campus throughout the pandemic mailing thousands of admissions letters to students.

"University staff are the lowest-paid employees on campus," said Yasaitis. "We don't have the economic ability to say, 'No, we're not coming back on campus if we're ordered to return to work on campus,' regardless of our concerns about health and safety."

Yasaitis said UW-Milwaukee has been very open about its planning for the fall return of students, and said the university needs to be an in-person institution in order to financially continue. Still, he worries about shortages of protective equipment like masks and said he’s warned staff members to purchase their own in the event the university has trouble purchasing enough for its employees. 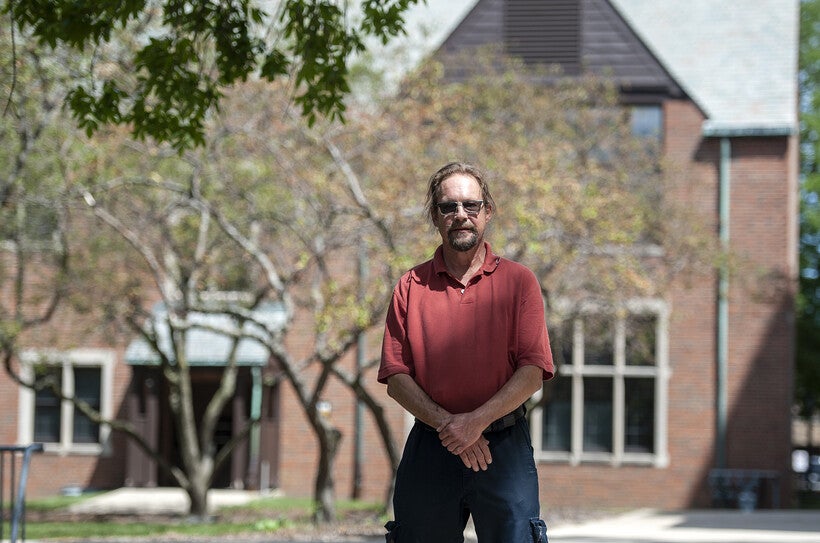 Campus reopening plans at public and private institutions in Milwaukee were complicated this July due to new guidelines issued by the city’s health department barring any school from offering in-person classes. In response, a coalition of administrators from 14 institutions sent a letter to the department on July 14, urging it to include language in the order offering exceptions to colleges and universities.

A week later, the Milwaukee Health Department changed course, allowing institutions of higher education to offer in-person classes this fall so long as their reopening plans are approved by the department.

On July 31, Marquette University, the state’s largest private college, announced that its reopening plan was approved by health officials, though it said a final decision on what fall classes will look like would be issued the first week of August.

Milwaukee Area Technical College Vice President Janice Falkenberg said they’re hopeful they’ll get final approval as well since less than 25 percent of classes will be face-to-face and the campus has extensive health measures in place, including mandatory temperature scanning at all entrances.

While Milwaukee colleges are advocating for students to come back to campus, the Milwaukee Public Schools board of education announced K-12 students would start their school-year online.