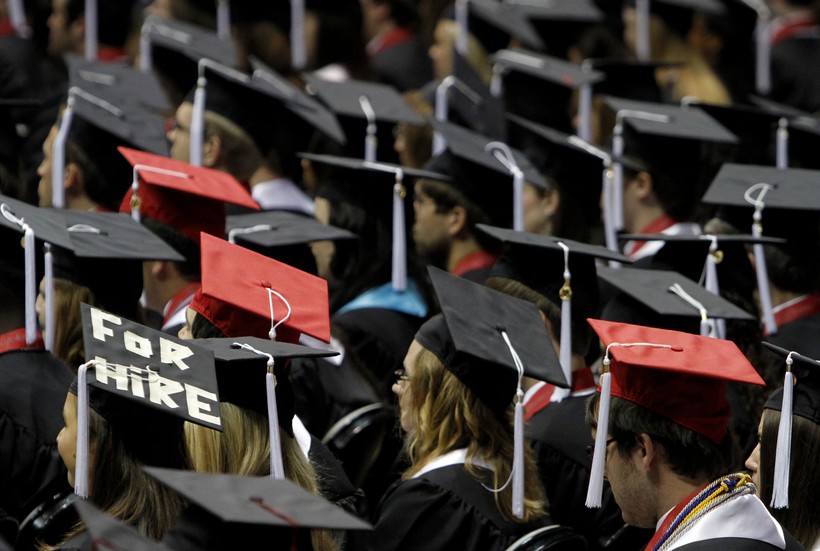 68 Percent Of Freshmen Enrolled In 2013 Graduated Within 6 Years
By Rich Kremer
Share:

The percentage of students graduating from Wisconsin colleges within six years has improved. While the state fared better than most other states, administrators at public and private universities in Wisconsin say they are rolling out new initiatives to further boost graduation rates and shrink disparities between students of color and their white counterparts.

New data from the National Student Clearinghouse Research Center (NSCRC) shows 68 percent of students who enrolled in Wisconsin colleges in 2013 graduated within six years. That's up from 62 percent for those who enrolled in 2009. While the increase may seem small, the impact on individual students can be significant.

Students who graduate sooner pay less tuition and accrue less debt than those taking longer to earn degrees. They also have the opportunity to begin careers sooner and earn higher wages than those who spend extra years in school.

Among the 45 states profiled in the NSCRC report, Wisconsin had the eighth highest six-year graduation rate when measuring all students. Vermont topped the list with 74 percent graduating in six years or less.

Graduation rates varied, though, when digging deeper into the data.

At Marquette University in Milwaukee 82 percent of those who enrolled in 2013 graduated last year.

Vice President for Enrollment Management John Baworowsky credited a software that helps warn staff of students who are falling behind and at risk of failing. He said the goal is for faculty and staff to be alerted to things like students scoring poorly on midterm exams. He also said the university is working to create more opportunities for undergraduate students to study abroad or conduct research with faculty.

"Those are some key, high-impact learning practices that help motivate students and keep them focused toward graduation," said Baworowsky.

The NSCRC does not breakdown graduation rates by race and ethnicity for private, nonprofit schools.

UW System President Ray Cross said campuses and system administration have been working to reduce those gaps. He pointed to a rollout in 2019 of new software aimed at helping alert student advisors when students are missing classes, not using dining hall services or scoring poorly on tests. Cross said the UW System has been streamlining remedial classes, particularly in mathematics with a goal of getting students to finish prerequisites in their first year.

"Those support efforts actually improve, disproportionally, the work we're doing with underrepresented groups," said Cross. "So, that has a larger impact on that group just by increasing the support for students."

Cross said closing the graduation rate gap between white students and students of color is vital for the system and for the state's economy amid a shortage of skilled workers. According to system data, the graduation rates for underrepresented minority students have improved from 35.5 percent of freshmen enrolling in 2000 to 45.6 percent for those who enrolled in 2012.

The NSCRC data does not breakdown graduation rates by income for public or private campuses.

Within the UW System, graduation rates for all students are significantly higher on some campuses than others, according to system data.

UW-Madison's six-year graduation rate was the highest at 87.2 percent for the freshman class that enrolled in 2011. For that same time span, UW-Superior had the lowest rate overall at 42.4 percent.

Emily Neuman, UW-Superior's director of institutional research, said their most recent data shows the six-year graduation rate has increased to 48 percent for freshmen that enrolled in 2013.

She said graduation rates are influenced by a number of factors including whether a student works or whether they’re from lower-income families. She said one way to measure that is by looking at students who are eligible for Pell Grants, which are offered by the federal government to low-income students. At UW-Superior, Neumann said 40 percent of students enrolled in the 2018-19 school year were Pell recipients.

UW-Superior Interim Executive Director of Student Success Mickey Fitch-Collins told WPR the campus is using the advising software championed by system president Cross and has also boosted advisement efforts to help guide students through their collegiate career. She said another promising change is the use of what are known as bridge programs aimed at better preparing students for college.

"Part of that is that they enroll in a course that's called collegiate study skills in their first semester and that teaches them all the skills that we think are helpful to be successful in college," said Fitch-Collins. "So, things like note taking and how to effectively digest lectures in classes and how to give presentations."

At UW-Madison, 16.5 percent of students qualified for Pell Grants in the 2018-19 school year. But Vice Provost for Academic Affairs Jocelyn Milner said efforts to reduce the cost of college through programs like Bucky's Tuition Promise, which offers four years of free tuition and fees for freshmen from low-income families, have helped those students focus on academics.

"For that 2013 cohort the six-year graduation rate for Pell Grant recipients was 78.8 percent," said Milner. "So, still way over the (68 percent) average, and a little bit lower than students who have more means."

Milner said UW-Madison has also been working to offer clear, easy to understand plans in the campus course catalog showing students what requirements are needed to graduate on time. She said campus officials at UW-Madison are hopeful to one day reach a six-year graduation rate of 90 percent.

In November, UW-Madison announced that a cohort of students that graduated in during the 2018-19 school year did so in just under four years. Chancellor Rebecca Blank said it was a record for the university.