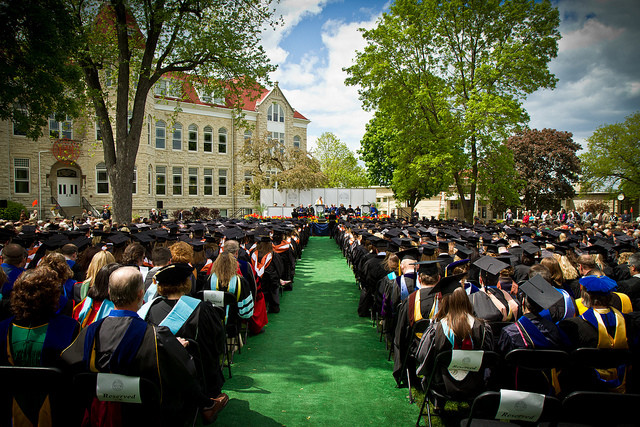 Carroll University is among 22 campuses that have banned smoking in Wisconsin. Photo: Meltsley (CC-BY-NC-SA).

Two years ago, 15 Wisconsin colleges and universities had tobacco-free campuses. Since then, seven more campuses have banned smoking, and some have also banned e-cigarettes.

The bans are part of a national trend: Across the U.S., one-third of all campuses — meaning roughly 1,400 universities and colleges — have banned smoking.

Clifford Douglas directs the national Tobacco-Free Campus Initiative. Prior to that, the attorney pushed for banning smoking on airlines and helped initiate a criminal investigation of the tobacco industry.

“In all of the efforts I’ve been involved in, I have never seen progress — as rapid progress and significant — as I’ve seen in our efforts to promote adoption of smoke- and tobacco -free policies on college campuses,” Douglas said.

University of Wisconsin-Stevens Point has itself banned smoking, a measure that Chancellor Bernie Patterson has supported. But he said the timing has to be right and a decision made whether to focus on education or enforcement.

“There was concern from the very beginning that this would be (an) 'I  gotcha! You're going to get in deep trouble' approach,” Patterson said. “Our campus police wanted absolutely nothing to do with it, and rightfully so. So the way we have settled on this is that it's really a peer-pressure, ‘Be nice, we’re a tobacco free campus and we'd appreciate it if you didn't smoke,’ kind of approach.”

Patterson said UW-Stevens Point has been a leader in wellness initiatives and that the smoking ban is an example of this.