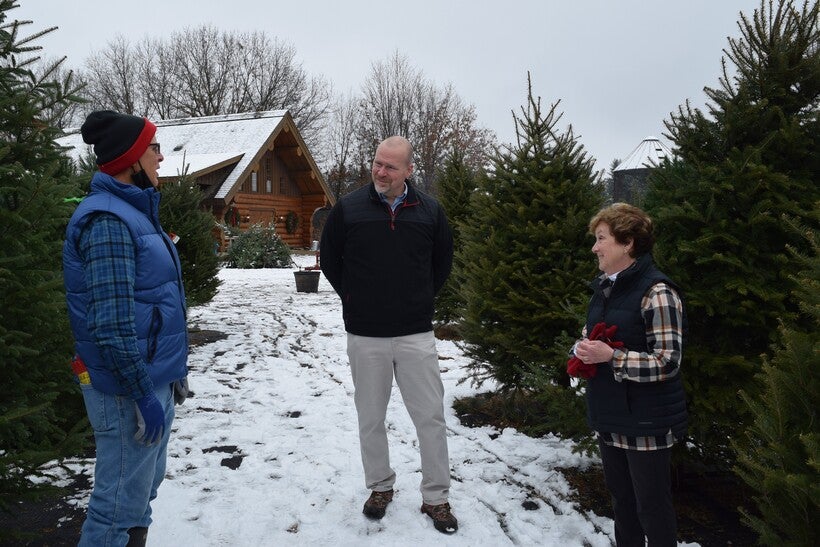 Randy Romanski, secretary of the Wisconsin Department of Agriculture, Trade and Consumer Protection, center, talks with Tim and Therese Olson on their Christmas tree farm in Eleva, Wis. on Friday, Dec. 3, 2021. Hope Kirwan/WPR

Therese Olson and her husband Tim have been selling Christmas trees from Lowes Creek Tree Farm near Eau Claire for more than 30 years.

Most of the trees they're selling this season were transplanted into fields ten years ago.

This long growing time has helped the state's Christmas tree growers maintain a steady supply during the COVID-19 pandemic, which has disrupted production and shipping schedules for so many other businesses this year.

Randy Romanski, secretary of the state Department of Agriculture, Trade and Consumer Protection, visited Lowes Creek on Friday to highlight the state’s position as the fourth-largest Christmas tree producer in the nation.

"(Producers) are planning over a period of years. They’re planting one to two trees for every one that's harvested just in the anticipation that they are planting for the future," Romanski said.

DATCP licenses around 400 tree growers in the state and inspects tree exports that travel to dozens of other states and parts of Canada. 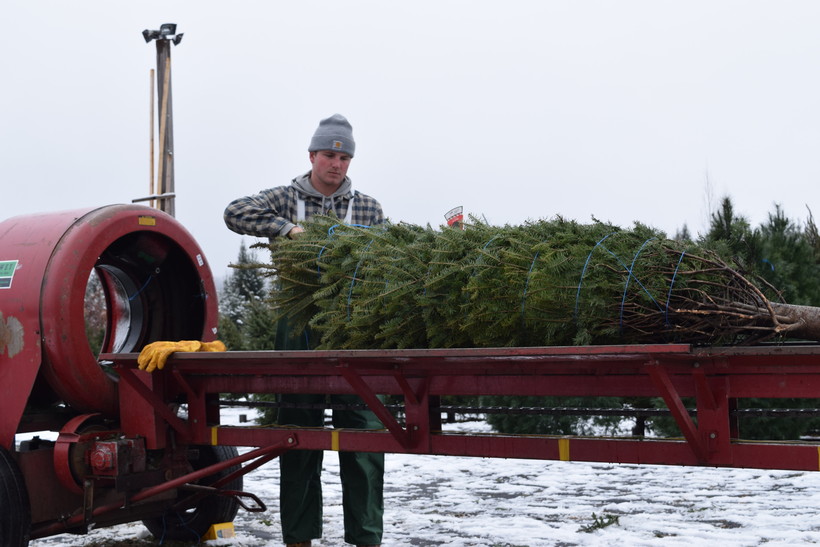 On her farm, Olson said they're seeing more regional customers mention looking for a locally-produced tree or a more environmentally-conscious choice when shopping this year.

"The weekend after Thanksgiving was busier than we've ever seen. We had nice weather and we had a lot of enthusiastic people coming out," she said.

Olson said they’ve also been able to loosen some of the pandemic-related restrictions they put in place last year to try to keep their customers and employees safe.

"We actually adjusted our operation immensely (in 2020). We chose to discontinue our choose-and-cut operation because we do take people out in closed buses," Olson said. "We required everyone to wear masks, even in the outdoors, because at that time we did not know how it was spread and there are hundreds of people here at one time."

With a better understanding of how the virus spreads heading into this season, Olson said they reopened their choose-and-cut fields and are no longer requiring masks outside. But she said they’re still paying attention to the pandemic and are already prepared to adjust operations again next year in response to public health needs.

Romanski said he believes there's been increased attention paid to agritourism operations like Christmas tree farms during the pandemic.

"It's almost like what we saw with a lot of parks. People wanted to be outdoors, they had an opportunity to be outdoors during the pandemic, and that's something that you can experience here on the farm as well," he said.

But tree producers haven't been immune to the negative impacts of the pandemic on agriculture.

Olson said farm equipment production has been delayed since last year, putting their orders behind by months. 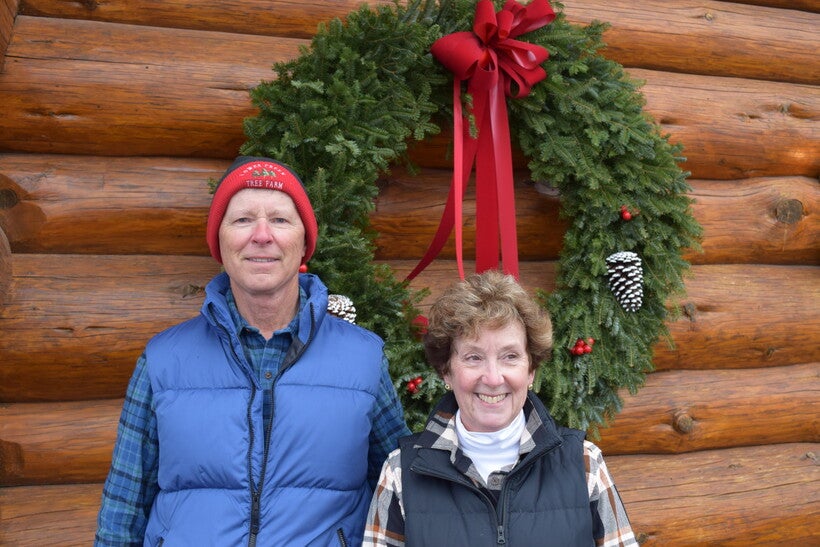 Lowes Creek is also a nursery and landscaping business. Olson said these summer operations have flourished with more people staying at home and investing in their outdoor spaces.

Finding workers for the farm's seasonal jobs has been more difficult this year, something Olson said she has heard from almost every local business in her area. With drought-like conditions in western Wisconsin and many other parts of the state this summer, Olson said they had to pull workers from their already limited supply to hand water their youngest trees.

"We were watching very carefully because we did go through the drought of 1988," Olson said. "We dedicated those folks to start watering the trees that we had just planted. Because in approximately 10 years, we will notice that those trees that did not survive will affect the harvest."

Olson said they aren't feeling the pinch for employees as badly this winter.

"Many of the employees that come back for our Christmas season are individuals who have worked for us as teenagers out in the field or watering... during their summers in high school and college," Olson said. "Whatever they’re doing, they cross out the weekend after Thanksgiving and the first part of December to come out and help us."

She said these workers are like family to her and her husband, and will help keep their tree farm going through another holiday season.