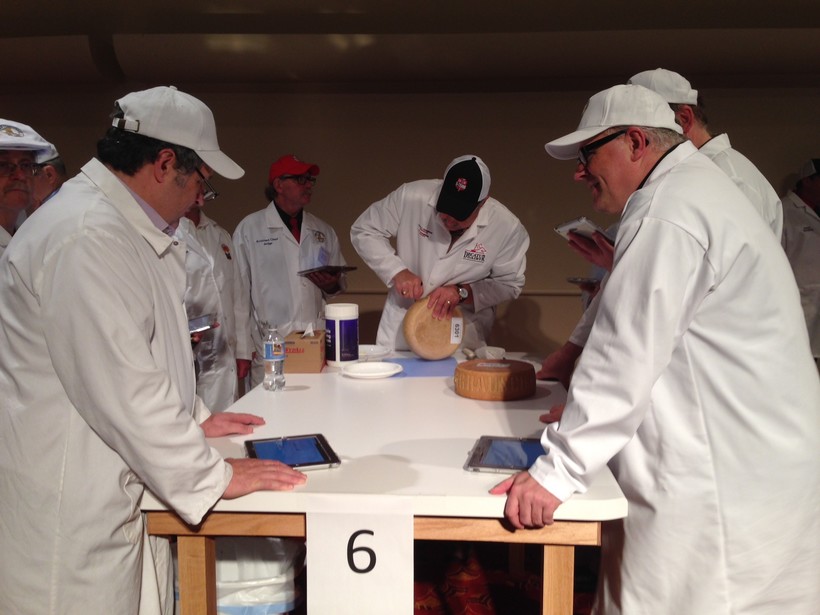 A U.S. cheese has won the World Championship Cheese Contest for the first time since 1988 — and, perhaps unsurprisingly, it's a cheese made in Monroe, Wisconsin.

The Grand Cru Surchoix made by Fitchburg-based Emmi Roth USA beat out 2,955 other cheeses from around the world on Wednesday night in Madison. Emmi Roth quality assurance manager Kevin Davis said it’s an incredible honor for everyone — from the milk farmers to the cheesemakers to the production employees.

The Grand Cru Surchoix is now the world champion of cheese. Maureen McCollum/WPR

"This is cheese we make every day," he said. "We take notes on what would be the best cheese to submit to the contest. It happened to be March, the right time for this cheese. If the contest was in June, we may have submitted a different cheese."

The Grand Cru Suchoix is an alpine-style, artisan cheese, similar to gruyere. Davis said the recipe came from Switzerland, and that they tried to duplicate the Swiss’ cave-aged process.

The cheese was judged by the dozens of dairy and cheese specialists, including Russell Smith, the chief judge for the Australian cheese industry.

"It was my highest-scoring cheese," he said. "The big flavors are balanced. It’s fruity and savory. It’s often difficult to get the texture right, and this texture was just right. It’s a big cheese with gorgeous flavor."

One other Wisconsin cheese was among the 16 finalists: the Extra-Aged Pleasant Ridge Reserve made by Uplands Cheese in Dodgeville.