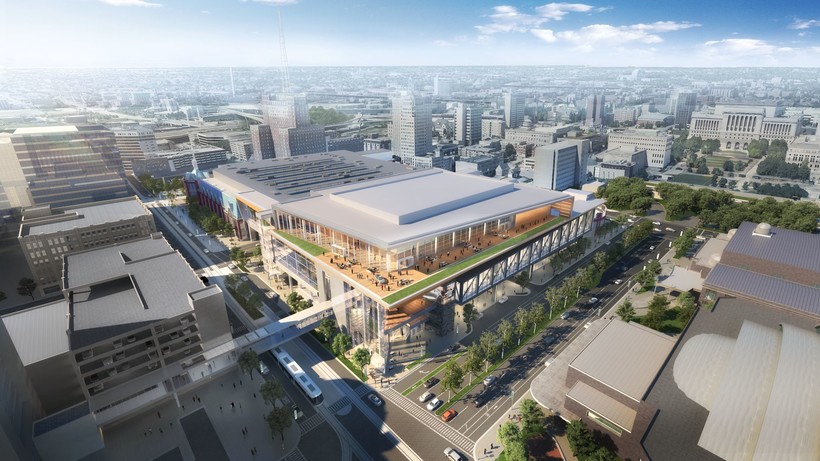 A rendering of the Wisconsin Center expansion. Rendering courtesy of Eppstein Uhen Architects and tvsdesign.

Construction Will Begin When Economy Improves
By Corrinne Hess
Share:

After years of discussions and setbacks, Milwaukee’s downtown convention center will be expanded. The timeline of the $420 million Wisconsin Center project, however, is unknown since the convention center's governing body is funded with hotel and food and beverage taxes. Those taxes have been drastically cut since the new coronavirus pandemic began.

The Wisconsin Center District Board, which is made up of 17 members appointed by the governor, Milwaukee mayor and Milwaukee County executive, voted to move forward with the project after a lengthy discussion.

The project will require increasing Milwaukee County’s hotel tax rate from 2.5 percent to 3 percent in January, extending the food and beverage tax past its 2033 expiration, and restructuring existing debt.

Before voting, the board was told the Wisconsin Center District is facing a $21 million shortfall.

So far, 61 events have been canceled or postponed at Wisconsin Center, Fiserv Forum, Miller High Life Theatre and University of Wisconsin-Milwaukee Panther Arena, all venues operated by the district. Restaurants and bars have been closed since March 17.

Marty Brooks, president and CEO of the Wisconsin Center District, said expansion is critical for the long-term success of the district.

The expansion will double the square footage of the convention center by adding 112,000 square feet of space to the exhibition hall, create more than 1,150 on-site construction jobs, attract an additional 100,000 visitors to Milwaukee annually, and generate an estimated $12.6 billion in spending over a 30-year period, Brooks said.

Brooks is hoping to break ground on the project in 2021, but it will depend on market conditions.

Supporters say the expansion is something that has been needed for 20 years. Before the new coronavirus pandemic, Milwaukee had been turning away conventions because of its inadequate facilities.

"It never seems to be the right time in order to make these plans happen," said Milwaukee Alder Ashanti Hamilton. "Right now I think it is very important for us to be able to put forward some sense of hope in the event we make a turn in these tough times that there is a bright spot for Milwaukee and a commitment to build a strong city."

Opponents of the downtown convention center expansion pushed to table the discussion until the economy improves.

"We seem to be going into this thing blind as a board," Sanfelippo said. "These are events that are out of our control, and the best economists in the country and in our state are having a very difficult time projecting what our economy is going to look like. I just don’t know how we can put ourselves on the hook for additional debt payments when we’re not certain we can cover what we’ve got now."