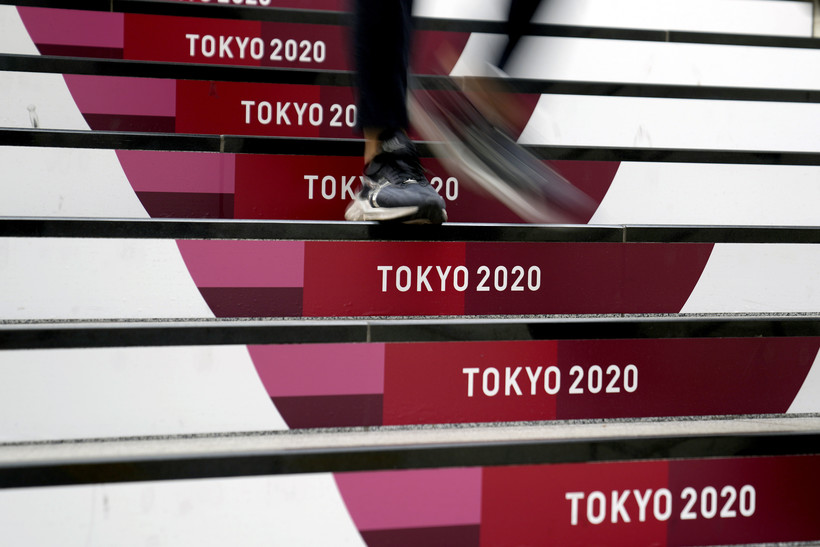 A commuter walks down stairs leading to a subway station before the start of the 2020 Summer Olympics, Wednesday, July 21, 2021, in Tokyo. Jeff Roberson/AP Photo

Wisconsin Athletes Ready To Represent Team USA At The Olympics

Seven Team USA athletes will represent Wisconsin at the Tokyo Olympics in the coming weeks in events including trap shooting, track and field, rowing and sailing.

Alie Rusher, for example, will be representing Team USA in the quadruple sculls rowing event. She was born in London and raised in Glenview, Illinois, but currently she calls West Bend, Wisconsin home after having visited the area each summer.

"I spent all my summers there doing, like sailing on the local lake and hanging out with my cousins," said Rusher. "Then when I went to college, my parents built a house there."

Being an Olympian runs in the family. Rusher's parents were Olympic rowers themselves in 1988 and 1992, taking home silver and bronze medals in the process.

"We had posters of the Olympics framed in our hallway and the duffel bags we used were my parents' old bags in the Olympics," said Rusher. "It was just something I wanted to do as a little kid because you know, if you admire your parents, like, you want to do what they did."

Rusher, at her parents' encouragement, took up multiple sports to develop her athletic skills before trying rowing in high school.

"Rowing is also something that you can get into later in life," said Rusher. "As long as you are athletic and fit, you can really succeed."

The sport takes a variety of forms at the Olympics, ranging from single-person boats to eight-member teams.

Rusher said the quadruple sculls event requires a mix of strength and finesse.

"The biggest challenge has been staying super light and quick, yet also finding a way to add my power to the stroke because the boat's moving so fast," said Rusher. "It's definitely fun to be in a team boat versus the single, which I was in most of the year. I definitely feed off the energy of other people."

Rusher said the pandemic gave her an extra year to train, allowing her to work with Olympian rowers past and present.

"I was sort of always of the mindset that if I wanted to go to the Olympics, no matter how long it would take, as long as I kept chipping away at it, I could get there," said Rusher.

She said she's looking forward to being on what she calls the big stage for the first time.

She said it has the potential to be one of the best rowing experiences she ever had. And she plans to continue rowing for the next Olympic cycle.

Meanwhile, Madelynn Bernau, who grew up in Racine County, will represent Team USA as a trap shooter.

She started target shooting when she was 12 years old. She said when she was younger she had no interest in being competitive in it, but she secured her spot on the Olympic team in March of last year.

"It's still hard to believe that I actually am one of those athletes and now athletes look up to me," said Bernau.

Bernau said taking part in the Olympics is more exciting than it is nerve-wracking.

"I do appreciate people coming up to me and wanting to learn from my experiences and me being able to give my personal you know, information and knowledge to them. I really do appreciate that," said Bernau. "But I've never been, like, an attention seeker. I'm not wanting to stand out in a crowd."

Bernau said before being chosen for the Olympics, she considered herself an underdog in the sport.

"I never made, like, top three out of all the girls in the nation until the Olympic trials, and then it was kind of like everything just, not spiraled out of control, but it was like a fast-forward button," said Bernau. "The whole year and a half or a year that we've actually been given to prepare has actually helped me a lot, you know, grow and learn as an athlete."

She said she's excited, even if the Olympics look different this year because of the pandemic.

"We're kind of on track to getting back to normal," said Bernau. "It's just that little kindle of hope, I think, that people need, you know, just to keep pushing through and keep living their lives, and eventually, we're just going to get through this."

COVID-19 concerns meant the games were postponed from last year. Even now, with Japan in a state of emergency, events will be closed to spectators.

The opening ceremonies of the Tokyo Olympics are Friday. The games continue through Aug. 8.