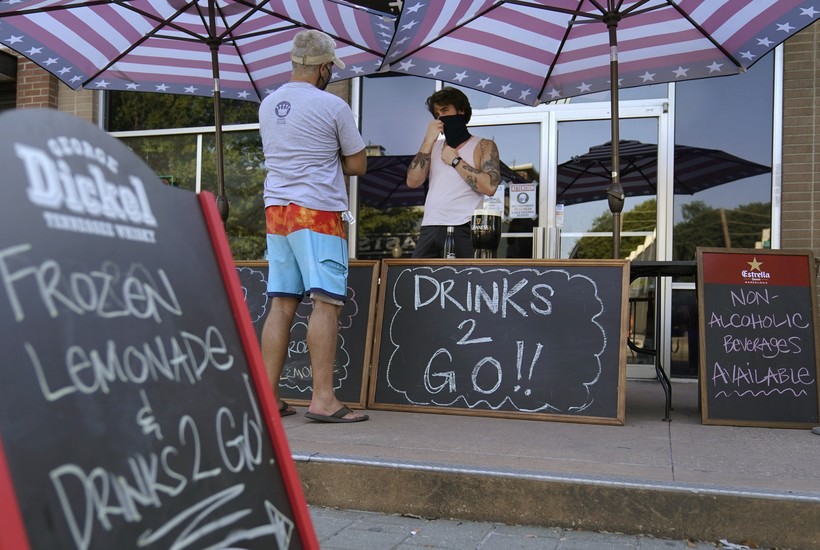 A drinks-to-go table is set up outside the Old Crow bar on Greenville Avenue in Dallas, Thursday, Aug. 13, 2020. Some states and cities in the U.S. are allowing cocktails to-go due to the pandemic. LM Otero/AP Photo

Bars and restaurants in Wisconsin would be able to sell cocktails to go under a proposal approved unanimously Wednesday by the state Assembly.

Under the bill, licensed businesses would be able to sell the beverages as part of takeaway orders as long as the drinks are equipped with a "tamper-evident seal."

Supporters say the plan will provide much-needed support to bars and restaurants struggling to make a profit during the COVID-19 pandemic.

In prepared testimony before an Assembly committee last month, Kristine Hillmer, president and CEO of the Wisconsin Restaurant Association, said restaurants often rely on liquor sales to stay afloat. She said those sales have been drastically curbed by a decline in in-person dining during the pandemic.

According to the National Conference of State Legislatures, more than a dozen states have laws on the books allowing to-go cocktails, several of which were approved during the pandemic.

The bill has yet to be voted on in a Senate committee.

Another bipartisan bill approved Wednesday would allow hairstylists in Wisconsin to provide natural hair-braiding services, like twisting and weaving, without a barbering or cosmetology license. Some members of the Legislature’s Black caucus have advocated for the bill, including Rep. Shelia Stubbs, D-Madison, one of the bill’s sponsors.

"African-style hair braiding is a natural and ancient craft that provides many talented practitioners pathways to self-sufficiency and entrepreneurship," Stubbs said during debate. "This will not only impact the economic lives of people of color, but this bill will help stimulate the economy across the state of Wisconsin."

The measure passed on a vote of 88-5. No groups have registered their opposition to the bill. It has yet to be voted on in a Senate committee.

During Senate debate, Democratic lawmakers raised concerns about some of Limbaugh’s controversial statements, including a skit calling former President Barack Obama a racial slur and a recurring segment that mocked people dying from AIDS.

Assembly Democrats echoed many of those concerns Wednesday.

"The man you are choosing to honor chose fear and anger," said Rep. Francesca Hong, D-Madison. "This man made people feel scared."

"I just want you to sit with that for a moment to understand how this looks," said Rep. LaKeshia Myers, D-Milwaukee.

Several Republicans spoke in support of Limbaugh, saying he was instrumental in shaping their political ideals. Rep. Scott Krug, R-Nekoosa, said he started listening to Limbaugh as a teenager.

"Not only did I appreciate at the time that there was somebody that wanted to speak what I believed, it really helped mold some of the things that brought me to this chamber, this career," he said.