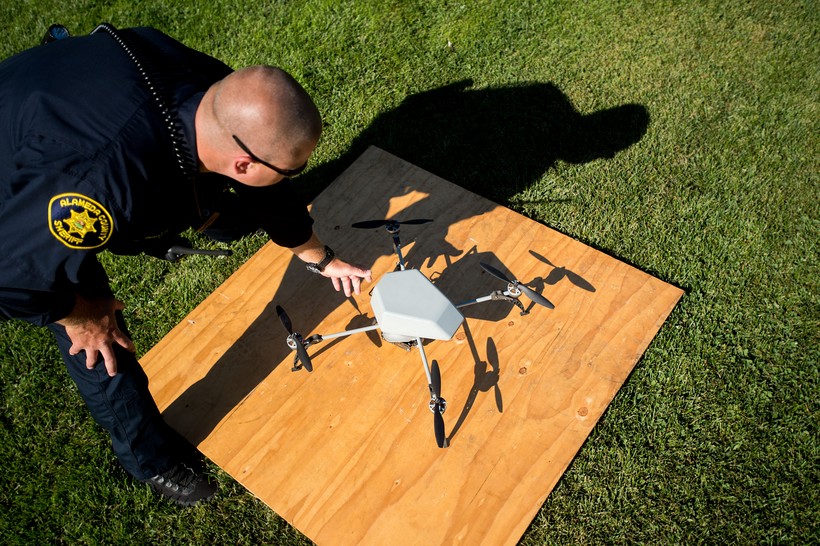 Alameda County Sheriff's Deputy Dave Durbin prepares to fly a drone during a demonstration of a search and rescue operation, in Dublin, Calif. Noah Berger/AP Photo

Wisconsin Among Nation's Leaders In Drone Use By Public Safety Agencies

Number Of Departments Using Drones Tripled In A Year
By Danielle Kaeding
Share:

Wisconsin is among three states nationwide that are seeing the highest use of drones by state and local public safety agencies. The number of police, fire and sheriff’s departments using drones tripled from 18 to 56 in Wisconsin this year.

Nationwide, the number of agencies with drones has more than doubled to 910, said Dan Gettinger, co-director of the Center for the Study of the Drone at Bard College. He said one reason Wisconsin may be seeing growth is that it’s less expensive than using manned aircraft.

"As far as I’m concerned, the first time we’re able to use that drone to find a lost child or elderly person, it will more than pay for itself," said Spoden.

Spoden said drones can save valuable time and resources in such cases. In other cases, Superior Police Chief Nick Alexander said they can potentially save lives. His department has used drones for rescue operations, mapping out crime scenes and building searches. He noted one of the department’s two drones was used to fight a massive blaze that broke out at the Husky Energy oil refinery last month.

"The refinery incident a month ago really serves as a powerful example of the value it can bring," he said. "Husky, I know, has publicly stated that the footage that our drone was able to show helped them see a path where they could get in and start defensive firefighting operations."

However, the growing use of drones also coincides with increasing concerns over privacy and oversight, said Emilio de Torre, director of community engagement with the American Civil Liberties Union of Wisconsin.

"It would be extremely short-sighted of us to think that drones are going to be deployed with any new measurement of guidance or that there’ll be some sort of oversight to make sure they’re being deployed fairly and that there’s some well-written policy governing its usage," he said. "I’m worried that it’s just going to be a new toy that’s going to be used willy-nilly and one or two high-profile good examples will be elevated. There’s a great opportunity for wholesale abuse of privacy and civil rights and civil liberties of the citizens of Wisconsin."

Torre encouraged communities to be proactive and develop open-ended policies that require agencies to account for the technology they buy, its usage and data storage. He noted the use of drones and other technology should be subject to regular monitoring to ensure technology isn’t used in a manner that undermines people’s civil liberties.

Law enforcement argue they’re using drones to better protect the public — not spy on them. Madison Police Lieutenant Mike Hanson said a team of 11 officers went through four days of intensive training and certification by the Federal Aviation Administration to operate the department’s drones.

"The Madison Police Department is aware of this technology and some of the fears that some citizens might have out of the fact that it’s so new to society in general," said Hanson. "We are training our operators, and it is built into our standard operating procedures to have set guidelines for its use."

Hanson said there are no plans to buy more drones for the department at this time, but he could see expanding their use in the future. Superior’s police chief said they’re planning to add a third drone with thermal imaging for his department this year.