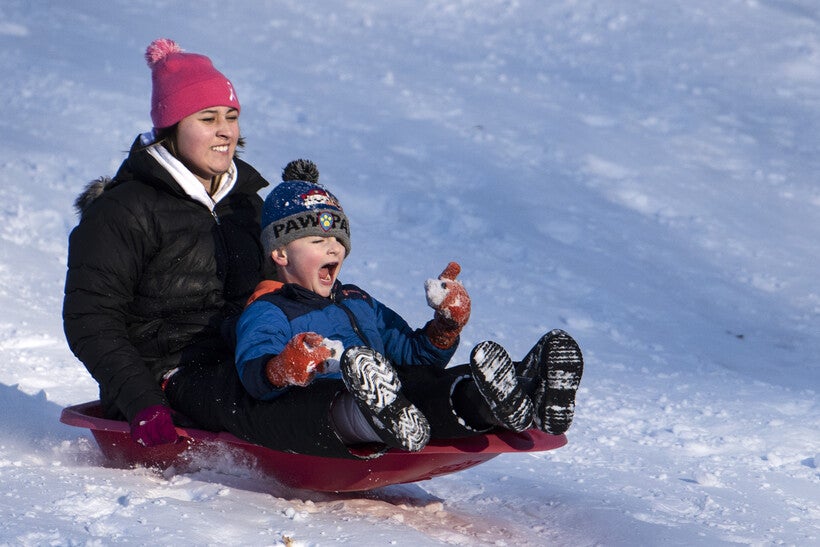 A snow squall last week and blizzard-like conditions this week in Wisconsin are reminding everyone winter is far from over — never mind the groundhog and any predictions based on the furry animal’s shadow.

Late winter in Wisconsin can be a grab bag: Oftentimes beautiful; sometimes challenging; and occasionally downright dangerous. And when people hear the phrase "wintry mix," they know they’re going to get a bit of everything Mother Nature has to throw at them. That’s meant hail, sleet, thunder and snow depending on what part of the state you’re in.

Late Monday into Tuesday, motorists were urged to avoid all unnecessary travel. Many schools across the state announced Monday that they'd be closed Tuesday.

In northern Wisconsin, many businesses were closed Tuesday while road crews tried to keep up with a deluge of snow and blizzard-like conditions that lowered visibility.

As of 10:30 a.m. Tuesday, 27.5 inches of snow had piled up over 24 hours in Washburn, a city in northern Wisconsin along the shore of Lake Superior's Chequamegon Bay, according to National Weather Service reports.

"I actually contemplated this morning, before coming to work, whether I should ski, snowshoe or walk. I decided to just walk. It was above my knees in some locations," said Tony Janisch, assistant city administrator in Washburn.

"It's been snowing sideways for two days now," Janisch continued. "With the potential of 6 to 14 more inches of snow today, we could be hitting levels we saw two years ago when we got 31 inches of snow" in the Washburn area.

Round 2 of our #WinterStorm will bring additional snow today. Highest amounts will be along the South Shore of Lake Superior and under a few narrow lake-enhanced bands. #Snow will wind down this afternoon through early Wednesday morning for most areas. #MnWx #WiWx. pic.twitter.com/SppHiUTgev

Further south, the weather service warned of slick conditions, not only on roads but sidewalks. West of Milwaukee there was thunder, sleet and freezing rain Tuesday morning.

In Walworth County, snow was falling at the rate of an inch an hour.

Parts of Wisconsin, including Richland Center, Mauston and La Crosse also had hail.

And it's not over.

Josh Sandstrom, a National Weather Service meteorologist in Duluth, said snow will continue falling through Tuesday evening before the storm starts to wind down.

"We’ve got our second round of snow coming today," Sandstrom said. "It’s basically a large area of low pressure that’s moving through the Upper Midwest, and it's bringing some heavy snowfall on the northern side of the low-pressure system as the system moves to the northeast."

How icy is my driveway in Waukesha? 🧊 😳

Strong winds in the Ashland area gusting up to 40 mph led to a lot of blowing and drifting snow Tuesday morning.

"We’ve got 4-foot drifts, but then we have patches where there’s hardly any snow on the ground at all," Sandstrom said.

For the past month, he said, Wisconsin weather has come from an Alberta clipper, a low-pressure system that originates in western Canada and produces little snow and a blast of icy air. This latest weather system is coming from the southwest, he said, bringing moisture from the Gulf of Mexico, which is blanketing northern Wisconsin with snow and covering much of the rest of the state in ice.

Fun fact: On this day 100 years ago, a snowstorm was affecting much of Minnesota, including Duluth, just as it is today. From 2/21 to 2/23, 1922, 15 inches of snow fell at Duluth with northeast winds to 50 mph creating blizzard conditions. Read more here: https://t.co/P9qAnCsFjG