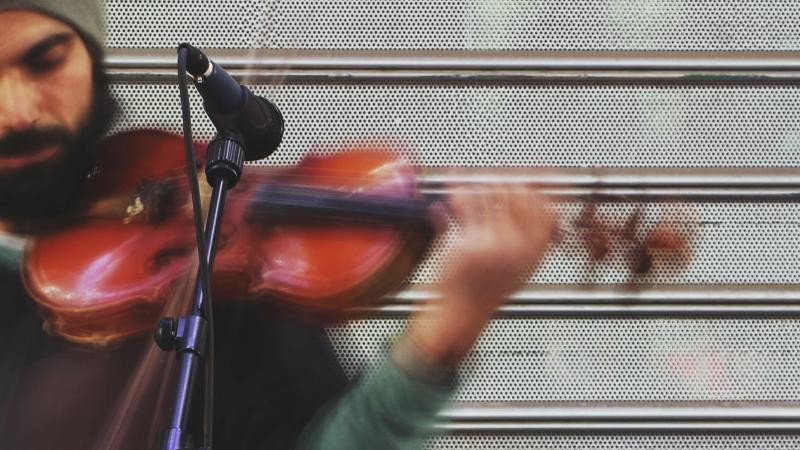 William Brittelle Says He Is A Post-Genre Musician

Losing Genre Means Composer Can 'Do Whatever He Wants'
By Anne Strainchamps
Share:

Then there’s William Brittelle. A classically trained composer who brings death metal screams, classical strings, digi-pop vocals and looping synthesizers together in one indefinable style. His most recent album, "Loving the Chambered Nautilus," hit No. 1 on Amazon’s chamber music chart.

After series of personal crises and some serious professional soul-searching, Brittelle rejected all the labels.

Today, he calls himself a post-genre musician.

"I’m allowed to do whatever I want to do," he said in his interview with "To the Best of Our Knowledge" host Anne Strainchamps. Brittelle talked about his musical influences, growing up in a small southern town, the self-inflicted vocal disorder that rendered him voiceless for six months, his quest to create immersive, consciousness-altering musical experiences and his recent adjustment to fatherhood.

Brittelle composes music that ranges in scale and scope from symphonies to chamber groups indie-rock bands.

This interview has been edited from its original version for clarity and length.

William Brittelle: That whole album marked the end of my tumultuous relationship with genre information, and with feeling angry that in the classical realm, I wasn’t allowed to include things that were influential to me.

I was listening to a lot of thornier, athletic chamber music, and a lot of "pop" pop music too, and wondering how these things would go together. I remember getting in an argument (about Chambered Nautilus) with a programmer for NPR who said, "We can’t program this because it’s just pop music." And it was a string quartet piece.

At the time I was still reckoning with what it means to participate in classical music, but I’m in a different place now and that’s a discussion I’m not really interested in anymore.

WB: "Mohair Time Warp" is the first work I wrote that reflects my decision to find a way to bring everything I like together. It’s when I realized that the solution to what I’m trying to say artistically is not out there, it’s inside me. It’s about creating a space inside myself where I’m allowed to do whatever I want. If I like Def Leppard, great. If I like Xenakis, great.

This piece opens with me yelling "bam bam bam" over and over. I was on a subway and I remember how cathartic it was to think, 'I’m just going do whatever the hell I want to now.'

So much of what I’ve done since is about creating that freedom for myself and then trying to be really passionate about other people having that opportunity too.

"Dream Has No Sacrifice"

WB: A lot of my work starts with poetry or text and this was a phrase I just kept coming back to. I think when you’re younger, your dreams are about the future and achievement and moving toward something off in the distance, on the horizon.  And it’s easy to withstand adversity when you think you’re sacrificing for something that’s going to be so great down the road.

But when you become a father, all of a sudden you just have to be present. You’ve hit the horizon. The dream is this moment.

For me, being a father means getting used to extremely meaningful moments wedged between total disasters. When you’re 20, you can marinate in the moments that are meaningful. You can sit on a rock and look at the view as long as you want.

But now someone’s tugging at your shirt and wants to pee. So you have to be present to the moment, get everything out of it, and know that it’s all going to be demolished in the next moment.

A couple of nights ago, I was sitting in the living room looking around and everything was such a mess — books everywhere, food on the floor — the kind of mess that would drive a 28-year-old Type-A person crazy. And I looked around and thought, this is the evidence of the beauty of your life. This is what it looks like. And it’s nice to think that’s a possibility in every moment, even if it doesn’t feel like it.