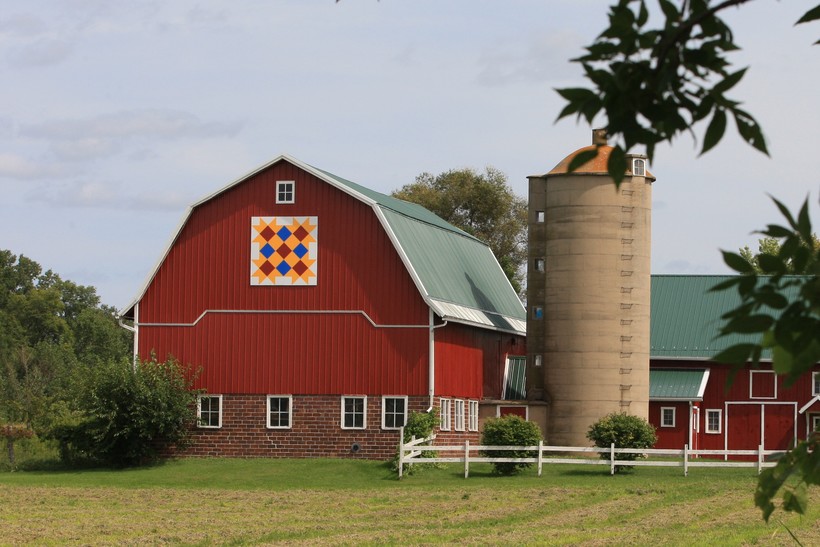 A Shawano County barn quilt is attached to a barn in the county. For the last nine years Jim and Irene Leuenberger have voluntarily painted the artwork in the basement of the Shawano Country Chamber of Commerce. Photo by Jim Leuenberger

Who's Behind The Shawano County Barn Quilts?

In Febuary, we received a question from Cassie in Shawano County.

Cassie asked: "How and who do we contact about getting a barn quilt in Shawano County?"

This summer, WPR's Patty Murray hit the road to find out the answer to this question, and saw some beautiful artwork along the way.

Shawano County is the self-proclaimed Barn Quilt Capital of the state, possibly the nation. The mostly geometric 8-foot square plywood painted quilts are on about 350 barns in the northeastern county.

The farmland there is dotted with many of the iconic red Wisconsin dairy barns. What sets the area apart is the striking abstract art attached to them.

The barns are mostly current or dormant dairy operations. Some of the large, red buildings are modern with metal siding, while others are more than a century old with weathered wood siding.

The creators of Shawano County’s quilts are Jim and Irene Leuenberger. For the last nine years, the couple has voluntarily painted the artwork in the basement of the Shawano Country Chamber of Commerce. 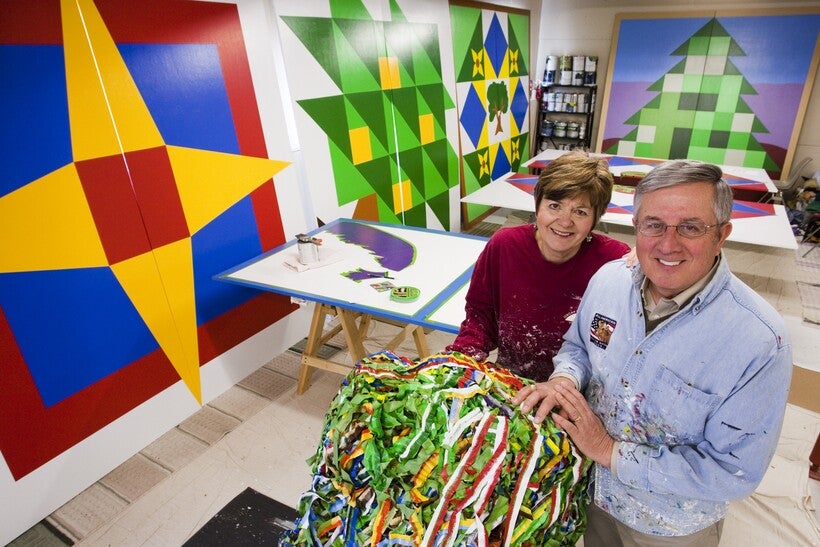 For the last nine years Jim and Irene Leuenberger have voluntarily painted the artwork in the basement of the Shawano Country Chamber of Commerce. Photo courtesy of Jim Leuenberger

Jim came up with the idea for the Shawano County barn quilt project after having seen designs in other states.

Driving on the backroads south of Shawano, Jim likes to point out some of his and Irene’s handiwork, as he does on barn quilt bus tours that the couple hosts several times a year.

However, he said there are a few barn "canvasses" he has not been able to work with.

"We are coming up on a barn on the left that is possibly my biggest frustration," he said. "I have probably talked to those people five times about putting a quilt on and they just do not want one."

"Wouldn’t that be a beautiful spot?" he rhetorically asked of the red wooden barn.

Indeed the barn in an open field with its old glass-balled lightning rods did seem to be begging to be wrapped in a quilt.

Shawano County is northwest of Green Bay and east of Wausau. Go around a backroads corner or speed by on Highway 29 and you will see them.

Irene said the designs "pop" more if they are not complicated.

"Sometimes the patterns are simpler, they really show up better because if there is too much detail and you cannot get that close to the barn, you don’t see the detail," she said.

That is especially significant for drivers moving at up to 70 mph. Much as commercial billboards, the quilts draw attention because of their simplicity.

Other areas in Wisconsin, and around the United States, also are home to barn quilt trails, but Shawano County seems to have hit on something in terms of volume.

Shawano County has "the largest quilt trail in the nation, by far" author and barn quilt aficionado, Suzi Parron, said.

"There are a couple of other (counties) with 200 or so blocks but in Shawano every one is the full 8-foot size. Most other communities include many smaller barn quilts on their projects. So, yes. They are the barn quilt capital not just of Wisconsin but also of the entire country!" Parron, who has travelled the country, exclaimed.

"Hex signs are usually round and are part of Pennsylvania Dutch culture," she said. "Barn quilts originated with the patterns that are typically sewn onto cloth quilts."

It costs around $200 to $300 to make a barn quilt. Some area businesses sponsor the costs for farm owners.

Irene said it can cost a few bucks to hoist the large plywood quilts onto the side of a huge barn, but most of the money goes into materials.

"We put two coats of primer on the barn quilts, both sides because you want it on the backside to preserve the wood, especially if it is against a barn," she said. "Then we put three coats of paint on the front side so that is five coats of paint."

Just as with cloth quilts, Irene said there is much detail involved, but she claimed people can do it if they try.

"Lots of taping and drying in between so you have to have the space to do it. But if people have the space and (you) give them a little encouragement, they can learn to paint a barn quilt," she said.

"Quilter" Jim said some barn owners have made improvements to their properties once they realized busloads of tourists were coming by the outdoor folk art gallery.

Driving down the by-way he pointed out a barn belonging to retired dairy farmers.

"They do not have cows anymore," he said.

"Since we put the quilt on here, this is one of the first ones, look how nice it looks. It has not deteriorated one tiny bit," Jim said. "They put new windows in the barn, they put a new door in. They landscaped it because they knew people were going to take pictures, which is pretty cool." 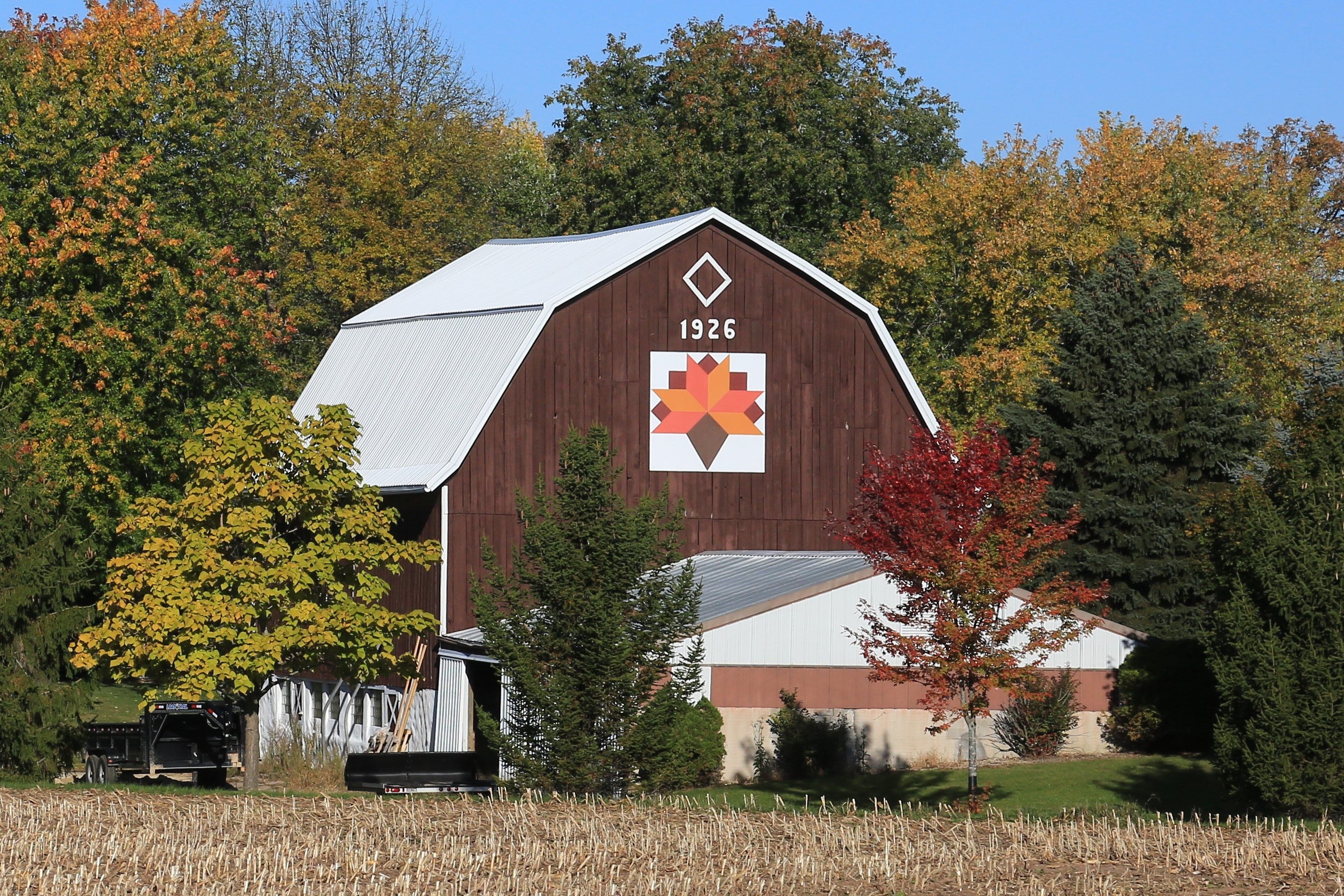 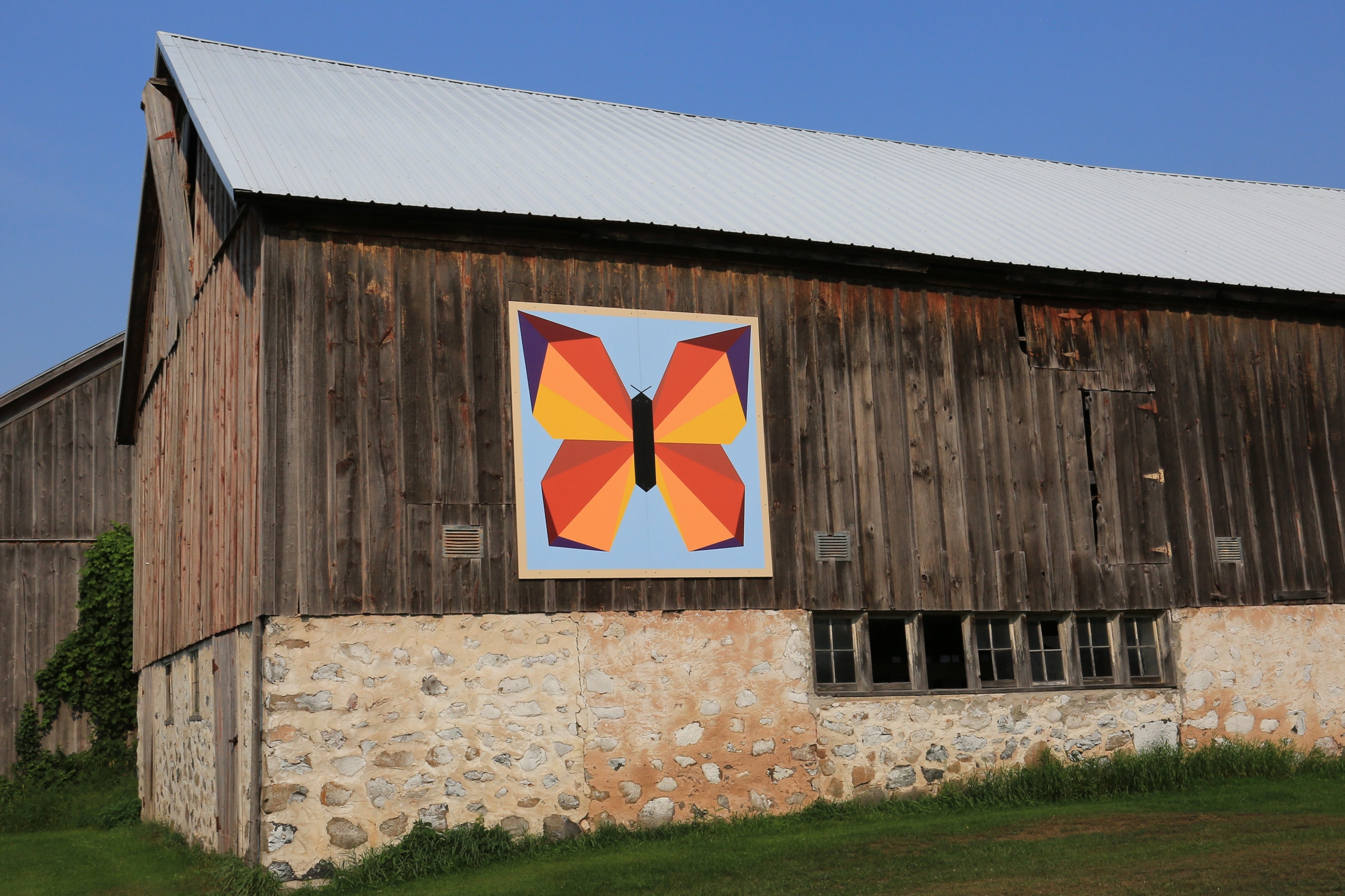 The Leuenbergers say in the nine years since they have worked on the project they have not lost one quilt to the elements or to fire.

The quilt patterns come from a sort of catalog but others are designed to fit the barn owner’s personality or profession: one depicts a pumpkin for a pumpkin farm owner; some others cows, for obvious reasons; and another a barber pole. 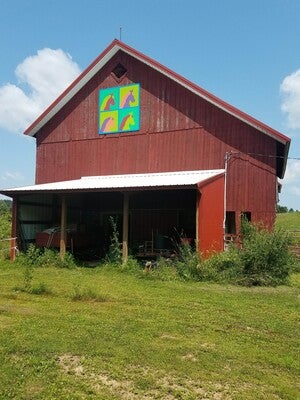 A Shawano County barn quilt called the Andy Warhol is attached to a barn in the county. Patty Murray/WPR

Because of their geometric and colorful appeal, Jim pointed out one of his favorites.

"The next one we are coming up on is the Andy Warhol," he said.

Out of the verdant summer farm fields of Shawano County appeared a barn quilt evocative of the late pop artist’s milieu. Instead of a grouping of Campbell Soup cans, Marilyn Monroe, or Elvis, there arose four flagrant horse faces.

"I love lime green," Jim said. "When you see it you will see what I mean. Four horse heads. They are really neat but I know I say that a lot. What do you think, think it looks like an Andy Warhol?"

It sort of did.