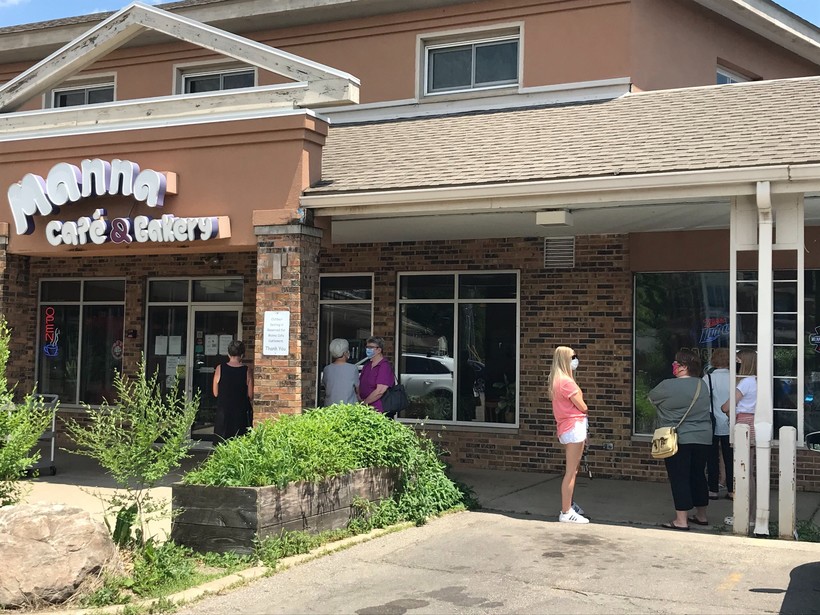 Manna Cafe closed on June 28, 2020 after 15 years in business. Owner Barb and Mike Pratzel say the pandemic was a factor in their decision to close a popular gathering spot on Madison's north side. Shamane Mills/WPR

Manna Café Closes After 15 Years While Other Restaurants Try To Adapt To Doing Business During Pandemic
By Shamane Mills
Share:

Even in the best of times, keeping a restaurant open can be challenging. Customer tastes change. Workers can be hard to come by.

Add a global pandemic to the list of concerns and it can become impossible to stay afloat.

Restaurants around Wisconsin shut down indoor seating at the end of March under the statewide "Safer at Home" order in March as part of an effort to contain the coronavirus. The Wisconsin Restaurant Association estimates 30 percent of eateries around the state that temporarily closed because of COVID-19 won’t reopen.

"When the crisis hit, people were pretty much forced to close down immediately," said Wisconsin Restaurant Association President and CEO Kristine Hillmer. "There was very little time to close down in a way that made sense. Many still had food they had to figure out what to do with."

Even as restrictions relax around the state, some restaurants are hesitant to welcome customers inside.

"We don’t feel comfortable letting people in and sitting down in here," said Barb Pratzel, who co-owns Manna Café & Bakery on Madison's north side with her husband Mike Pratzel. "We think Dane County’s decision to reopen is happening too fast, too soon. We firmly believe that. Our staff believes it. They don’t want to come in here. If we were to open, they wouldn’t work — that is, if we opened inside seating. Everybody’s afraid. And we agree with that."

Manna Café closed for good on June 28. The decision to retire was prompted in large part by the pandemic, Barb said, but also their age: both she and Mike are in their 60s.

In the weeks leading up to the closing, Manna Café's carryout business was bustling. On a hot day in mid-June, customers waited under awnings on a strip mall to get what they say is some of the best food in town.

Even though it was 88 degrees outside, Ryan Braithwaite ordered lemon lentil soup, one of his favorites. 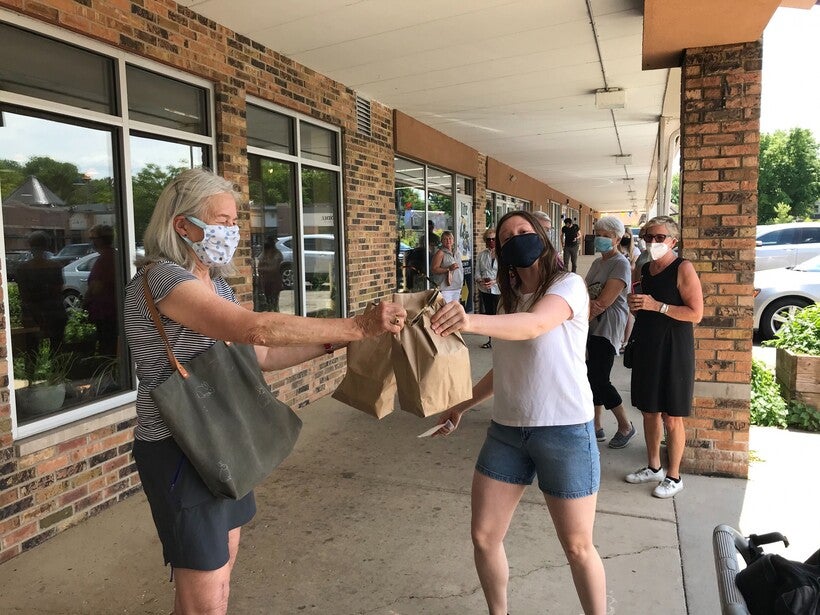 "These guys sell a lot of soup over the summer. They don’t switch to just gazpacho, which isn’t soup. It's glorified salsa," said Braithwaite who describes himself as a "foodie."

Braithwaite was a regular at Manna Café. He said he ate there at least once a week.

"It’s a Madison institution. The food is phenomenal. The staff is great. I'm on a first name basis with four or five people here. It's a real shame. I don’t want to complain. As a customer, it’s annoying for me but I can only imagine what it's like for the staff and the owners," he said.

Paula Kraemer, another longtime customer waiting outside, was stocking up on homemade quiche and Reuben sandwiches, both of which she hoped to freeze and eat once the restaurant closed.

"We’re very sad. The whole neighborhood is sad. Maybe something will take its place, but the quality has been reliable and good and it’s going to be a loss for the neighborhood," said Kraemer, who lives in Maple Bluff on Madison’s north side. 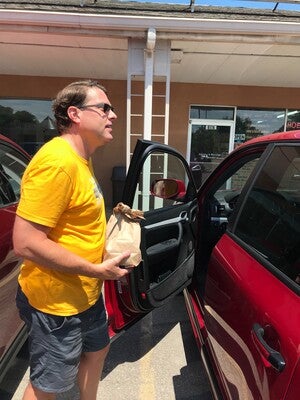 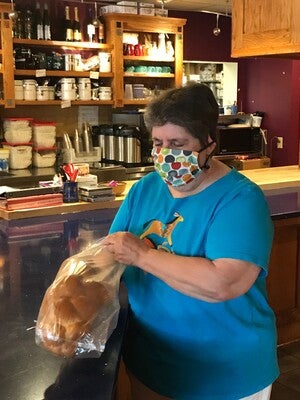 Barb Pratzel, who owns the now-closed Manna Cafe with her husband Mike, bags homemade bread made on site. The Pratzels provided carryout food to customers during the pandemic, but did not allow people to sit inside even when it was allowed under the county's reopening plan. Shamane Mills/WPR

Compliments on Barb Pratzel’s baking prompted her to leave a science writing job at Hazelton Laboratories, now Covance Laboratories, to launch a bed and breakfast in 1985.

"I had a passion for cooking and baking that came out of my childhood," said Barb. "I would bake all the time. And because my husband and I couldn’t eat everything I baked, I would bring this into work. People at work would say, 'Gosh, this is so good. You have to go into business someday.'"

After running Collins House Bed and Breakfast for 20 years, the Pratzels launched Manna Café in 2005, where they continued to focus on homemade food. They baked goods on site, roasted their own meats and made everything from scratch.

"There was really nobody at the time doing that," said Barb. "It made it complicated and challenging for us because we had no restaurant experience at all."

If they hadn’t closed, Manna Café could have operated at reduced capacity under Dane County’s reopening plan. Restaurants can also apply to use street space for outdoor seating. But Barb wasn’t sure customers would come in droves like they did before.

"We were crazy busy, packed every weekend. It’s going to be a long time before a restaurant is packed again. In order for us to get back to the kind of restaurant that we were running, an awful lot of time has to pass," she said.

Hillmer from the Wisconsin Restaurant Association agreed that it may take time for restaurants across the state to recover.

"I am cautiously hopeful. Now that most of the state is at least partially if not fully open. But we’re still going to see folks that are going to throw up their hands and say 'We can’t make it. We’ve lost too much ground,'" said Hillmer.

Hillmer said extra federal unemployment could make it difficult to hire workers through July, all while restaurants are spending more on safety measures.

Pratzel said putting up partitions between tables wouldn’t have fit in with the character of their cafe, which attracted loyal customers who liked to mingle — at times making the cafe feel more like a community center than restaurant.

"I love doing what we do here. I love making people happy. I’m proud that we’ve touched so many people’s lives all over the state. And that’s very hard to turn your back on that or let go of. It’s hard to watch sadness spilling out everywhere to know this thing we’ve created is not only a one of a kind, but it’s going to leave a gaping hole in this community," Barb said.

Retirement will be a big transition for the Pratzels after 15 years of hard work at the cafe. But Barb said she’s looking forward to sitting in somebody’s else’s cafe and having brunch with her husband.