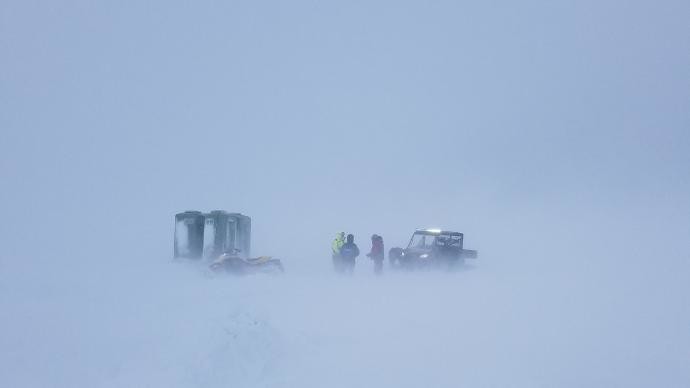 Rescuers on snowmobiles save a guide and 29 ice fishermen trapped in whiteout conditions on the bay of Green Bay Sunday, Feb. 24, 2019. Photo courtesy of the Wisconsin Department of Natural Resources

Wardens from the Wisconsin Department of Natural Resources had to rescue 30 fisherman off of the bay of Green Bay this past weekend. The rescue was overshadowed by a massive car pile-up on Interstate 41.

It was on Sunday that 29 anglers and their guide had to be rescued 2 miles off of Sturgeon Bay.

The fishermen were going for walleye and whitefish in their shanties then realized conditions were so bad they couldn't make it back to shore, according to Chris Groth, a warden supervisor with the DNR.

"We had a little bit of snow and then you put those 40-50 mile an hour winds in there and then you get a white out and then you get drifting and the vehicles, the ATVs they had taken out there and had gotten stuck," Groth said. "There was no way to get back. (They were) in shanties and didn't realize the wind was whipped up."

The guided fishing tour was stranded by winds of more than 50 mph, said Ben Treml, DNR regional conservation warden in Green Bay. He also said without the ice cap the waves on the bay would have been upwards of 6 feet.

"That's conditions you don't want to be in," Treml said.

Three wardens, two staff from the Sturgeon Bay Fire Department, and a Good Samaritan rode out on snowmobiles to get the people to shore.