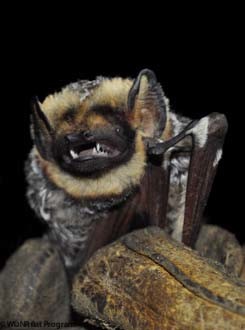 Researchers are asking people who like to explore caves or mines in Wisconsin to take precautions to prevent the spread of white-nose syndrome which has killed millions of bats in the eastern United States.

The Wisconsin Department of Natural Resources says the fungus that causes white-nose syndrome has been found in 14 locations in eight counties—most in southwestern Wisconsin. Last year, the fungus, which originated in Europe, and has spread to the Midwest from the eastern U.S., was detected in just one location in Wisconsin.

There aren’t believed to be any large populations of bats that have died as a result of being infected in Wisconsin, but it often takes two or three years from the detection of the fungus until it affects bats according to Owen Boyle, species management section chief with the Wisconsin DNR.

The fungus is believed to be spreading in one of two ways. Either through microscopic fungal spores attached to bats themselves, or through humans exploring caves and mines for recreation.

The DNR is working with cave or mine owners to educate people about what they can do to prevent the spread of the white-nose syndrome-causing fungus. Every cave owner is being asked to develop a prevention plan and share it with people who use the caves.

“That consists of a plan to make sure that folks aren’t using the same clothes, equipment and shoes in multiple caves or mines without detoxifying those clothes and equipment,” said Boyle. “We recommend that folks have dedicated gear, so clothes you wear at one site don’t go to a different site.”

It’s not known what the economic impact could be if millions of bats would die in Wisconsin. Bats help control insects, and a major bat loss could affect farming if insects, which bats normally consume, would start having a negative effect on crops.

UW-Platteville biologist Jeff Huebschman has been studying the bats in the southwestern corner of the state for more than a decade, and he believes humans are beginning to catch on to the importance of bats to the ecosystem.

“It’s sort of a giant ripple effect, if we remove bats or if their numbers decline dramatically how that will affect insect populations, and then how those insect populations may affect other insect or plant populations,” Huebschman said. “We’ve got a lot of unknowns on the horizon. One of the things we can say for certain is there will be an impact, and it could be a very profound impact, as we lose these bats that are consuming tons of insects on a regular basis.”

Huebschman and students have been gathering a strong baseline of data on the bats that live in the Platteville area since 2004. He says that will serve the state well as researchers are able to document the impact of white-nose syndrome on Wisconsin in the future.