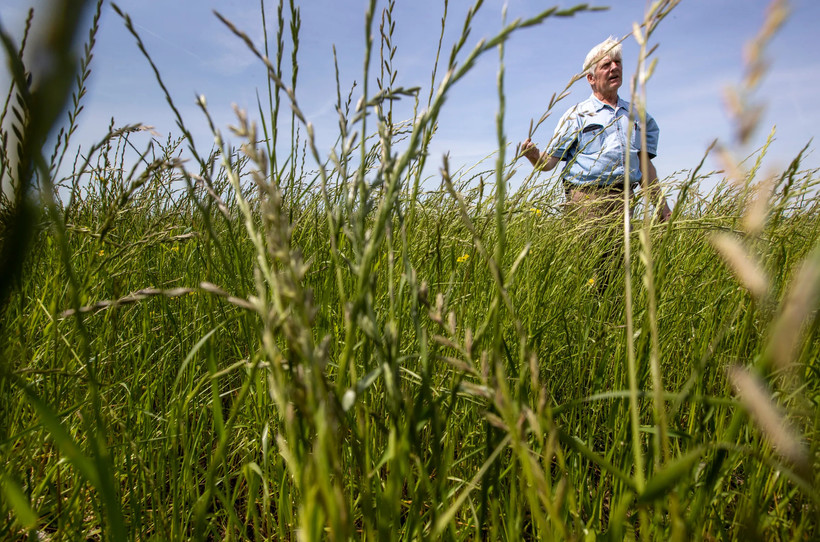 Farmer Ray McCormick stands among annual rye grass on his land in Vincennes, Ind., in May 2021. Robert Scheer/Indianapolis Star

A wetter world is changing Midwest farming. Can growers adapt? 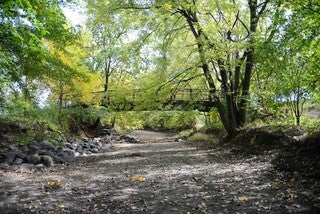 Corn was just starting to tassel across much of the Midwest, including fields in southern Indiana, a golden crown signaling the end of the season. But while most farmers were preparing for harvest, Ray McCormick was climbing back into his tractor to re-plant his soybeans.

The southwest Indiana farmer had to re-drill soybeans in August last year after two heavy rains on his river-bottom field wiped out a spring-planted corn crop and a July soybean crop.

"My dad used to say that after July 10, 'You’re kidding yourself trying to plant,'" said McCormick, who was trying to produce a crop for the landlords who own these fields.

McCormick’s delayed planting is one example of how a changing climate — and the rains that come with it — are transforming farm country in the Mississippi River watershed. 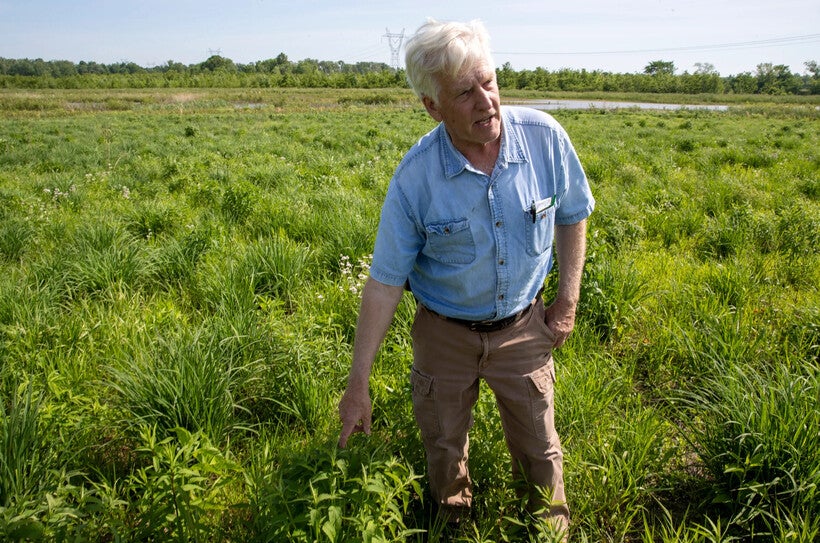 Ray McCormick shows off some native plants on wetlands he restored on his land near Vincennes, Ind., in May 2021. McCormick is a farmer and conservationist who sees lands in his area regularly flooding with increased rainfall. Robert Scheer/Indianapolis Star

A hotter atmosphere is causing rain to fall in harder bursts, pushing back planting seasons and drowning crops. At the same time as human-driven climate change is juicing precipitation, Corn Belt farming practices such as installing underground drainage tiles and leaving fields bare after harvest are changing how water moves across the landscape and into waterways.

That runoff eventually makes its way south, carrying sediment as well as pollution that contributes to the hypoxic, or oxygen-free, "dead zone" in the Gulf of Mexico.

"There is no part of the water cycle we haven’t altered," said Carrie Jennings, research and policy director with the Minnesota nonprofit advocacy group Freshwater.

In Indiana, along the Wabash River just upstream from McCormick, flows have increased by at least a third in the last century, according to a report from the Purdue Climate Change Impacts Center. More than 100 U.S. Geological Service stations in Indiana show increased streamflow over the past 30 years.

Similar trends of heavier rains and increased flows can be seen across the Midwest region.

All that water has to go somewhere. With a changing climate, the farms of the future will look different, experts say. How communities adapt will determine what kind of farming they can do.

"This rain isn’t going away," said Jennifer Kanine, the director of natural resources for the Pokagon Band of Potawatomi, which has worked to restore wetlands in northwest Indiana’s agricultural areas.

"We need to start working with it instead of fighting it," she continued. "We need to ask, how can we best manage all this water, because we’ve compromised the system so much already." 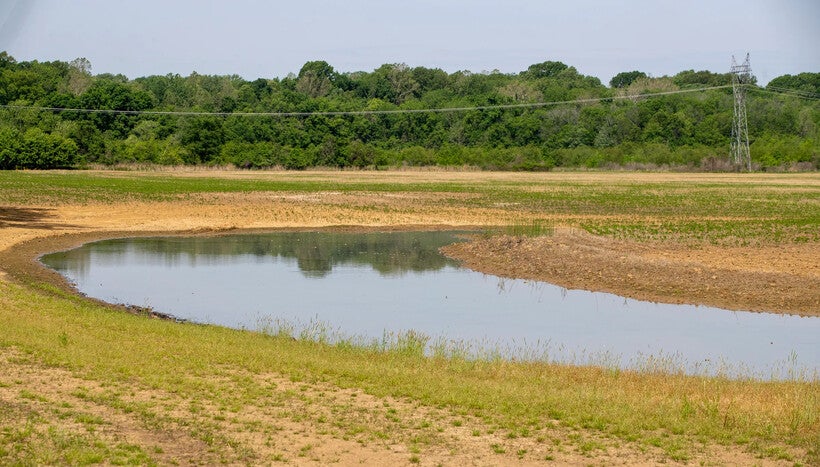 A marshy oxbow pond is the remnant of a river's former path on Ray McCormick’s land in Vincennes, Ind. Robert Scheer/Indianapolis Star

Harder rainfalls are one of the clearest climate signals emerging in the Upper Midwest.

Generally, climate data shows that the region is getting more rain — but the times when it falls are also changing, said Austin Pearson, a climatologist with the Midwestern Regional Climate Center. The increase in rainfall over the course of a year might obscure that skies are sometimes staying clear for weeks, then giving way to deluges that fill rain gauges all at once.

These rainfalls cause problems from the moment they hit the ground all the way downstream.

McCormick sees that first hand in his community — Vincennes, a 16,759-person town along the southwest Indiana-Illinois border. He said the intense rainfall that wreaks havoc on his and other fields usually falls upstream, and then flows down into an "almost guaranteed flood."

"Times have changed," he said, "but farmers down here that get flooded a lot in these floodplains, they’ll go right back in and just keep trying to grow a crop."

Farmers are taking different precautions, digging drainage trenches or installing more underground pipes, called drainage tiles, in their fields in an effort to keep them from flooding. Those steps have unintended consequences, however, that may worsen flooding and soil loss.

When heavy rain falls, it flows into the tiles, which empty into ditches that rush the water away from farm fields. These tiles drain some 55 million acres across the United States, according to a 2020 study in the journal Scientific Data.

Along the Le Sueur River in southern Minnesota, almost half of the 711,000 acre basin is fitted with agricultural drainage, according to a state report.

That drainage is making the Le Sueur run faster when rain falls — and washing away dirt from the banks of the river. In the case of Don and Becky Waskosky, it’s washing away from their backyard.

The couple live in a small neighborhood nestled into a curve of the river south of Mankato, with several farms nearby. When their home was built in the 1970s, they said, there were 100 feet between their back deck and the edge of the river. Today, that distance is 5 feet, followed by a steep drop-off to the river below.

This disappearing dirt has been well-studied in the Le Sueur, included in a state funded report that noted that farming and landscape changes had increased the dirt washing down the river by four to five times.

In 2016, extreme rains, traveling through a matrix of farmland drainage, pushed the Le Sueur dangerously high. The garage attached to a house next to the Waskoskys crumpled down a bank. That night, the couple slept in their living room, ready to go at a moment’s notice if the ground fell from under them.

Through the night, "we could hear large chunks of dirt hitting the river," Don Waskosky said. "You'd sleep for 10 minutes and wake up."

The house survived, but three of their neighbors have now demolished their homes and left because of erosion. 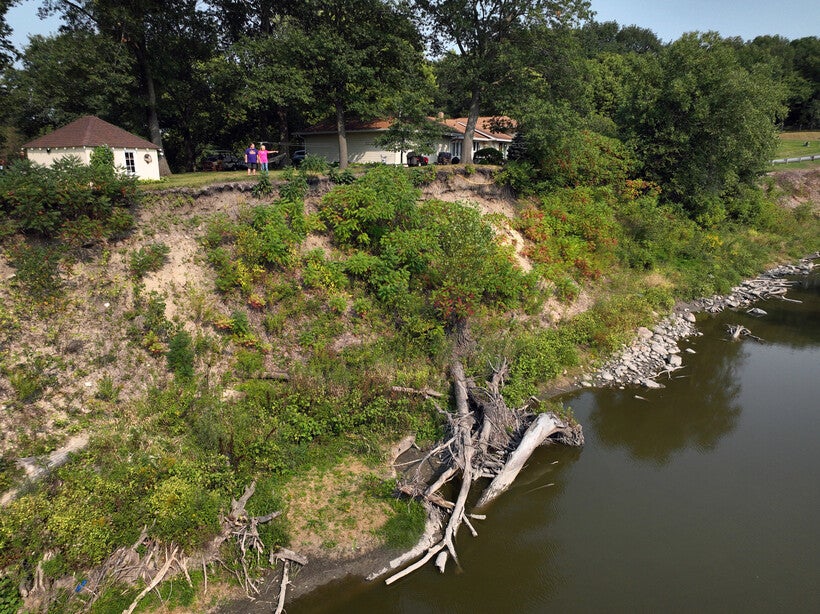 Don and Becky Waskosky came close to losing their home to erosion along the Le Sueur River in Mankato, Minn. in 2016 after heavy rains in the area. Brian Peterson/Star Tribune

Some federal programs take flood-prone farmland out of production, offering incentives to farmers to set the land aside.

The Emergency Watershed Protection Floodplain Easement Program has retired thousands of flooded farm properties across the country after presidential disaster declarations, according to the Natural Resources Conservation Service, or NRCS.

But more farmers want easements than there is money available. After one heavy rain in March 2019 pushed the Missouri River to surge out of its banks in Iowa, manure tanks overflowed, grain bins washed away and farmers couldn’t check on their animals because roads were flooded. The deluge was part of a spring of flooding across the country that prevented plantings on 20 million acres of insured farmland, according to the American Farm Bureau.

More than 360 Iowa landowners applied to retire flooded land in 2019 — far more than could have been funded, said Sindra Jensen, a former NRCS Iowa easements coordinator who now works for NRCS at the national level.

Landowners who don’t get an easement likely will keep farming flood-prone areas, causing further erosion and nutrient pollution in waterways.

And those who have to wait too long for payments may also back out. Jensen said roughly half the applicants flooded in 2019 pulled out when their land dried enough to use again.

"They have forgotten the flooding years," Jensen said. 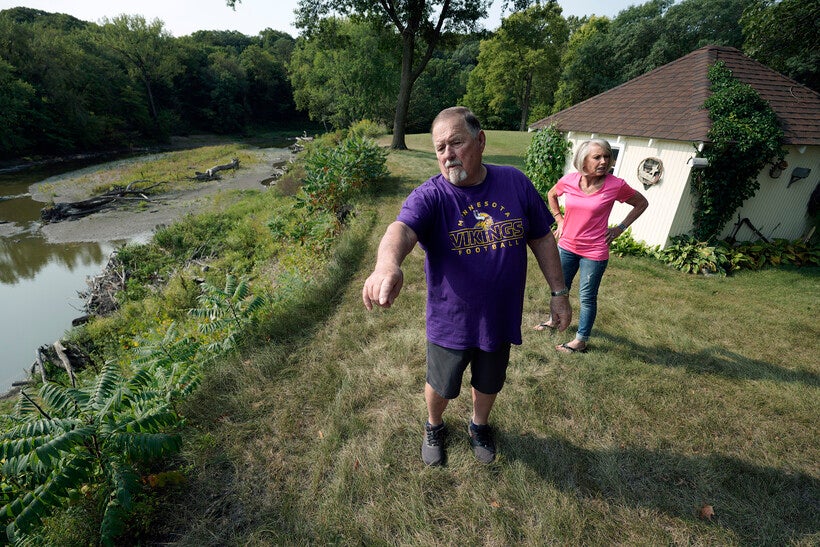 As part of the Le Sueur River Watershed Network, Don and Becky Waskosky work to educate farmers about rain and erosion after nearly losing their home in Mankato, Minn. in 2016. Brian Peterson/Star Tribune

Individual farmers aren’t the only ones who forget about the devastation of flooding caused by climate change.

Two of the U.S. Department of Agriculture’s largest agricultural conservation programs — which paid out $7.4 billion combined from 2017 to 2020 — used less than 12 percent of that on “climate-smart” practices, according to a study the Environmental Working Group released Sept. 28. These practices, including cover crops and reduced tilling, also help to retain rainfall.

At the same time, the U.S. paid out $17 billion in 2020 in crop insurance payouts and other subsidies to farmers that might encourage continued farming in flood-prone areas, according to the Environmental Working Group’s databases.

But that may be changing.

Curt Zingula, an Eastern Iowa landowner and retired farmer, knows the drainage tile he installed to keep his fields dry after heavy rains has the potential to harm water quality in nearby streams.

So he applied for government aid to install a saturated buffer in 2017 and now is working with the state and local government to put in a cellulosic bioreactor, essentially a woodchip trench that will filter water from 30 acres of tile lines.

"The greatest motivation is to try to reduce the nitrate load going into the streams and rivers," he said. "I’m familiar with the hypoxia in the Gulf. Everyone needs to be part of the solution."

This story is part of When it Rains, a special series from the Mississippi River Basin Ag & Water Desk, an editorially independent reporting network based at the University of Missouri School of Journalism in partnership with Report For America and the Society of Environmental Journalists, funded by the Walton Family Foundation.