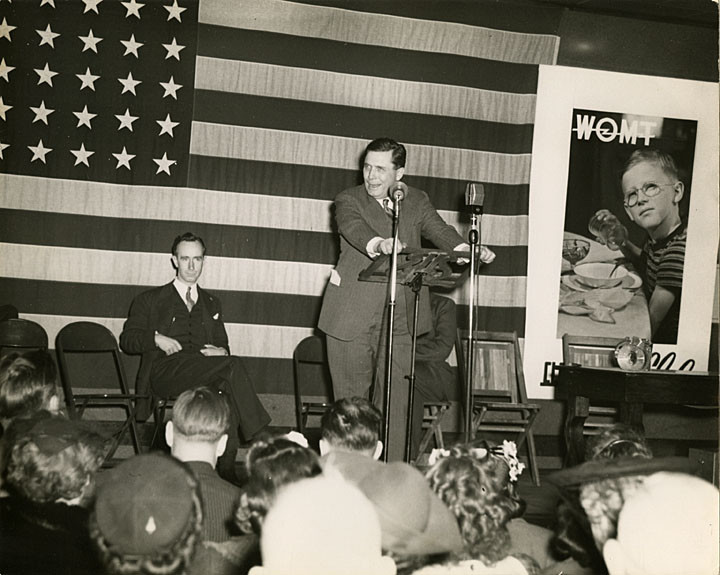 Republican presidential candidate Wendell Willkie staked everything on Wisconsin in 1944.

Primaries offered candidates who lacked the backing of party leadership a chance to demonstrate their support among ordinary people. With only a few states offering primaries in the 1940s, Wisconsin could exert a powerful influence on national politics and for Willkie, his entire political career.

Willkie learned that lesson the hard way. A Democrat throughout the 1920s and 1930s, Willkie became the candidate of the Republican Party after battling President Franklin Roosevelt over the New Deal and government ownership of electric power. He lost his fight, but gained national attention and the support of Republican leaders who nominated him as their candidate for president in 1940, despite Willkie having no political experience (and perhaps not being an actual Republican).

Willkie waged a robust campaign and received more votes than any Republican presidential candidate in history at that time, but it wasn't enough to defeat Roosevelt's bid for a third term.

The next few years were divisive for Willkie. Eager to retain the support of the Republicans but hesitant to follow their opposition to supporting Britain in World War II, Willkie sought to realign the Republican Party. Few followed his lead.

In 1943, Willkie announced his intention to seek the 1944 Republican nomination, asserting, "the Republican Party can exist only if it catches the spirit of the times." The primary system offered Willkie a way to take his vision directly to the people. He decided to wager his future on the Wisconsin Republican presidential primary on April 4, 1944.

Many questioned his decision but Willkie had his reasons. He had won every part of the state but Milwaukee in 1940. None of the other potential candidates, including General Douglas MacArthur — a Milwaukee native — planned to run in Wisconsin. At a lunch in Madison, he declared, "I hope you're with me in Wisconsin because I want a state like this with a great liberal tradition. But whether you're with me or not, I'm sticking to my policies."

His campaign trips to Wisconsin were mixed. Big crowds often came out to see him, but neither the state GOP chair as well Wisconsin's Republican governor planned to support him. While most local newspapers were friendly to him, the attacks against him in other newspapers, particularly the Chicago Tribune and the Milwaukee Sentinel, were unceasing. The Tribune repeatedly identified him as the "defeated 1940 candidate" when covering his events and discredited his attempts to reach rural audiences by making frequent mention of his ties to Wall Street and his millionaire friends. Willkie was also plagued by a sore throat that required medical attention

The large numbers of people who came out to see him and Willkie's attention to Wisconsin seemed to position him for victory. But when Election Day came on April 4, Willkie ran last in every district. He conceded his defeat after a searing attack on the New Deal in a speech in Omaha on April 5. He urged the Republicans to elect a candidate and to write a platform that represented his views, which he believed that millions of Americans shared.

Willkie had been the only presidential hopeful in his party to visit Wisconsin, but for many voters, Willkie appeared to be a Democrat only pretending to be a Republican. To make matters worse, the campaign had overspent in its efforts to win the state and all of his supporters and vendors clamored to be repaid.

On top of that, a throat infection he'd developed on the campaign trail returned. It was that sickness that eventually produced the cardiac event that killed him in October of 1944.

Even though Willkie's public political career was largely over after the primary, he was, it seems, laying the groundwork for a comeback through the creation of a new hybrid party at the suggestion of his 1940 nemesis, Roosevelt. However, both men died before anything could come of it.